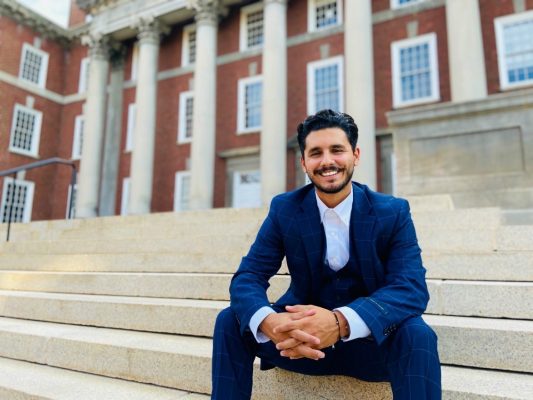 On a Monday morning in mid-March, Jeremy Gonzalez opened his email and learned he was being immediately evacuated from his Peace Corps post in West Timor, Indonesia. Although the COVID-19 pandemic had already prompted travel restrictions around the world, his evacuation orders were sudden and frantic.

“Evacuation was pretty hectic because up until two days before, we were being told that we’d probably be staying,” says Jeremy. “It was pretty tough, especially when you’re trying to say goodbye to people that you’ve made connections with.” On top of that, he worried what he was traveling back to. “I was hearing a lot of conjecture and rumors about what the COVID situation looked like here; and I was stressed about getting back home and having to re-adapt to the culture, because it is a reverse culture shock going from Indonesia back to America,” he says.

It didn’t take long for Jeremy to find his bearings, and by July he was on his way to earning dual degrees from the Maxwell School—a master of public administration (M.P.A.) and a master of arts in international relations (M.A.I.R.)—thanks to a special program for evacuated Peace Corps volunteers and U.S. Fulbright Grant recipients.

Back in Syracuse, when Maxwell’s enrollment staff learned of the imminent evacuation of 7,300 Peace Corps volunteers and 2,500 Fulbright grantees, they saw an opportunity for the school to help. The Department of Public Administration and International Affairs waived application fees and GRE testing requirements for its highly regarded professional degree programs and offered all admitted evacuees a 50 percent tuition scholarship.

All told, Maxwell enrolled 35 Peace Corps and 18 Fulbright evacuees into its M.P.A. and M.A.I.R. programs. When asked why the initiative is such a success, Maxwell’s director of enrollment management, Cory Meyers, says “I think it’s because the Maxwell School and the Peace Corps share a common mission to help make the world a better place for others… We really see Maxwell as a natural extension to what students were doing in either the Peace Corps or Fulbright.”

In fact, Jeremy says he had always planned to go to graduate school after the Peace Corps. When he left the United States for Indonesia, he brought a five-pound GRE test preparation book with him. So, when he returned home abruptly, he immediately began searching for the right program. “I saw the Maxwell School announcement while I was cruising one of the Peace Corps Facebook pages,” he says. “I did some research and found out the prestige of this program and what it offers to alumni. I applied to other schools, but Syracuse gave me the best scholarship—and I wanted more of the practical skills that the Maxwell School focuses on.”

At Maxwell, Jeremy is pursuing his interests in national security (M.P.A.) and peace, security and conflict (M.A.I.R.), and he hopes to complete his global internship in Indonesia through Maxwell’s partnership with the Center for Strategic and International Studies. “I want to get back there so bad,” he says.

A Passion for the Global Public Good 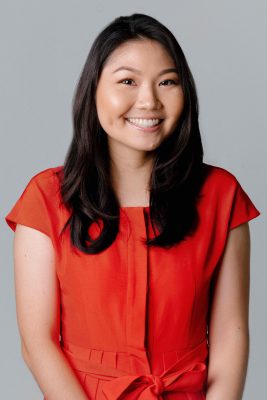 Kelli Sunabe is also among the 35 Peace Corps evacuees at Maxwell, where she is pursuing her interests in international labor. Unlike Jeremy, she knew that she was headed to Maxwell when she was evacuated near the end of her Peace Corps service. Kelli is one of four Robertson Foundation for Government Fellows, a scholarship program for highly qualified applicants that provides full tuition plus a stipend. In exchange, graduates agree to work in the U.S. federal government for three of seven years after graduation.

“My dream is to work for the U.S. State Department for the Office of International Labor Affairs,” says Kelli, who also is pursuing dual M.P.A./M.A.I.R. degrees. “The Office is responsible for overseeing regulations and ensuring that American companies are treating workers overseas ethically.”

Kelli first became interested in ending labor abuses, particularly in the “fast fashion” industry, as an undergraduate at the University of Hawai’i at Manoa, where she earned degrees in international business, human resource management, and fashion design. Kelli entered the Peace Corps after graduation, which she says, “was the best experience of my life.” She lived in Deyang, a city in the Sichuan Province, where she taught English at Sichuan Engineering Technical College (SCETC). “Most of our students end up working in entry-level positions.”

Kelli went the extra mile for her students. She organized departments across SCETC and worked with three local entrepreneurs, creating SCETC’s first Business Case Study Program. She convinced school leadership to provide a van so that students had the exclusive opportunity to visit successful businesses in Sichuan’s provincial capital, Chengdu. “I wanted to be able to empower my students to believe in themselves,” she explains.

Despite the abrupt transition, Kelli and Jeremy are grateful for how the school is carefully handling the COVID-19 pandemic. They both feel safe and are making friends. Jeremy describes his transition from Peace Corps into Maxwell as seamless. Three of his classes are held in person. “I think we’ve been pretty lucky to actually go to class,” he says. “When you’re over a Zoom screen, you don’t get to make a little banter and things like that with your classmates.” Jeremy is also able to network with students on campus. “Going to the Academic Village and seeing my peers, struggling through the same homework…those kinds of relationships and those bonds that you build are something that you can take away, even after school.”

Kelli agrees. “I was pleasantly surprised that we are still able to make friendships despite social distancing. You need to coordinate it a bit more, but people are open,” she says. “I have been happy with how careful the school has been; I don’t feel worried about going to in-person classes. There are always cleaning supplies and everyone is wearing their masks.”

Jeremy and Kelli are also impressed with Maxwell’s faculty, who are equally dedicated to research and teaching. “That’s what drew me to Maxwell,” Jeremy says. “They’re very smart people. My economics professor [environmental economics scholar David Popp] has been here for 15 to 20 years, he’s a Yale grad and it’s just amazing to go into a classroom and have someone that smart who is able to explain difficult concepts to you in such simple terms.”

Kelli says her most memorable experiences in the classroom, so far, include learning from Professor James Steinberg, former Deputy U.S. Secretary of State. “We are learning about how international actors think, how decisions are made and the effects of policies. His class really solidifies all aspects of IR.”

“One thing I would stress for students applying to Maxwell is make sure to apply for financial aid and not to delay or be afraid of asking,” Kelli says. In fact, the majority of Maxwell M.P.A. students receive financial assistance that covers more than half of tuition and fees.

The Maxwell School is extending the 50 percent scholarship and application fee waiver to former Peace Corps volunteers and Fulbright Scholars for next year, and GRE scores are no longer required for all applicants to the M.P.A., M.A.I.R., and Public Diplomacy and Global Communications (PDGC) programs. “These students have demonstrated a commitment to values that align with the Maxwell School’s mission—to leave the world better than we found it. We are excited to be able to help further their development through our world-class programs in public administration, diplomacy and international relations,” Meyers says.

For more information, email paia@maxwell.syr.edu or visit the program website.