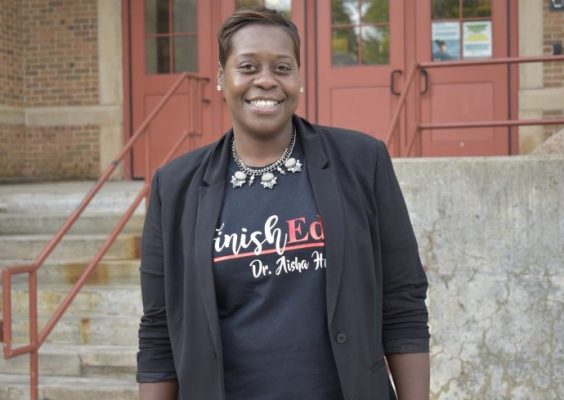 For many adults, it takes courage to walk through a door that can change the trajectory of their life. Oftentimes, that first step is taken with a mixture of hope and trepidation. Aisha Huntley ’05, G ’11 never imagined that she would find herself on the Syracuse University campus pursuing a bachelor’s degree after struggling to earn an associate degree at Onondaga Community College. “School had never been easy for me,” says Huntley. “I had to work so much harder than my peers.”

It was a University College billboard and radio ad that gave Huntley the courage to attend an information session to learn whether or not she had what it takes to be a Syracuse student. “I walked into University College with a toddler in tow,” says Huntley. “After talking to an advisor, I politely told her I didn’t know what I was thinking and apologized for wasting her time. She wouldn’t let me leave without making another appointment to talk with her again and told me she would personally do whatever she could to help me succeed.”

Like many part-time students, Huntley was raising her daughters while working full time. “I had many blue-collar jobs that were decent, but not good enough,” she says. “With each new job came a yearning to do more, have more and be more. Not only for myself, but for my children.”

Huntley and her five siblings grew up in Syracuse and faced many hardships. They were able to navigate through the challenges of life by sticking together and having a strong, hardworking mother as a role model. “She was the key factor in keeping our family together,” Huntley says. “Though forced to endure difficulties, many that were beyond her control, my mother still managed to foster a strong sense of shared commitment to our family while focusing on our academic success.” Huntley says that her mother’s ability to remain resilient during unstable times was one of the reasons she was driven to succeed.

Inspired by her mother’s strength and encouragement, Huntley returned to University College for another meeting with an academic advisor. They discussed her options, the timeframe for earning a bachelor’s degree and the financial resources available to her. Through the Arthur O. Eve Higher Education Opportunity Program (HEOP), most of Huntley’s expenses were paid for. “I was shocked to learn I qualified for the HEOP program and was grateful for the guidance I received to secure the necessary funding to return to school,” she says.

Huntley found that support, guidance and tough love from the staff at University College was crucial to her achievements. “The staff checked on me every step of the way to make sure I had everything I needed to be successful. During those early years, there were times my advisor even watched my daughter so I could complete homework assignments and attend group meetings.”

While Huntley considered earning a degree in education, she chose information management and technology, and after graduating, worked as an information technology analyst. “I realized that if I remained in that field, I would forever be confined to a cubicle,” she says. “I never thought about being a teacher until friends and family encouraged me to pursue it. Teaching was not a profession I thought about as a child.” However, Huntley could imagine herself being a school administrator and returned to the School of Education to earn a master’s degree in education.

These days, Huntley teaches special education at Frazer Pre-K-8 School in Syracuse. She teaches all content area subjects to the 15 students in her class and every day is a challenge. “I teach them, listen to them, wipe tears, foster friendships and diffuse tense situations” she says. “I tell them the difference between Common Core lessons and life lessons.” Teaching in room 220 at Frazer School, Huntley says that on any given day you can hear her say, “this is not a 220 lesson, this is a life lesson.”

There is no doubt that Huntley is making a significant impact on her students. She wants to ensure that they are not only “school smart,” but “street smart.” “I talk to them about advocating for themselves, knowing when to walk away and the difference between right and wrong,” she says. “More importantly, I hold them accountable for their actions.”

Because Huntley grew up in Syracuse, she knows firsthand the challenges that some students face. It is that understanding that gives her the ability to authentically guide them. “It takes more than relying on what was learned in school or navigating lesson plans to make a difference in students’ lives,” she says.

Huntley now has a doctoral degree in education from St. John Fisher College. “I knew I wanted a doctoral degree, but it seemed out of my reach, especially since I didn’t have any role models who encouraged me to begin my education at a young age.” Huntley says earning each degree was an accomplishment she never dreamed was possible. “Defending my doctoral dissertation and receiving final editor approval was the proudest moment of my life.”

Reimagining Her Purpose and Passion

Huntley reflects on her years of higher education and knows that she’s not quite done learning. She is back at the School of Education taking classes in pursuit of a Certificate of Advanced Study (CAS) in educational leadership. She dreams of becoming a leader in social justice in order to influence change in urban, marginalized communities.

“I did not want my childhood reality to be that of my children, she says. “I dedicate all of my hard work, blood, sweat and tears to my four amazing daughters. I finally earned my seat at the table and they bear witness to that. I have four daughters and four degrees. I defied all expectations and you can too.”