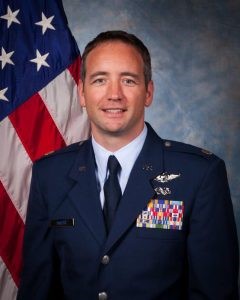 Throughout his career, Lieutenant Colonel Travis Sheets has had a passion for teaching and mentoring. Now, as the new Commander of Air Force ROTC Detachment 535 at Syracuse, he’s bringing that same passion to his role and helping to develop the leaders of tomorrow’s Air Force.

“Your most important job as a leader is making sure those behind you are more prepared than you were,” Travis says. “For me, it’s been all about people since the beginning.”

Travis grew up in the mountains of West Virginia where his opportunities were limited. He became the first person in his family to attend college, which was made possible by a scholarship he received from the Virginia Air National Guard to attend Virginia Tech. There, he was a part of the school’s Corps of Cadets, received a ROTC scholarship and was selected to be a pilot. “I had no idea flying airplanes would be in store for me,” he says.

Learning to fly was just the beginning. Starting as a mechanic on an F-16 jet fighter, Travis went on to fly non-traditional aviation airplanes for 16 years, logging more than 4,000 flight hours, with half of those spent in combat. During his service, Travis was deployed all over the world, including Africa, Asia, Europe and the Middle East. “The only place I really haven’t been is Antarctica,” Travis says. “Maybe someday I’ll check that box, too.” 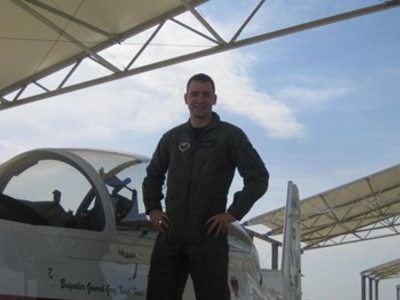 Sheets during his time as an Air Force pilot.

Following his tenure as a pilot, Travis went to Air University, the Air Force’s center for professional military education, and received his master’s degree while also teaching courses. There, he realized his love for teaching and being a part of other people’s journeys. “The thing I have enjoyed most about my career is teaching and helping other people learn how to fly airplanes,” Travis says. He is determined to continue the tradition of knowledge sharing in aviation with a focus on helping others learn from his experience. “Something you learn one day may save someone’s life the next day,” he says.

Travis’ passion for teaching eventually led him to Syracuse, where he was excited by the opportunity to join the community and lead Detachment 535. As Commander, he wears two hats–one for military training and the other for academia. This means his days can include anything from supervising field training exercises to working on course syllabi for the aerospace studies department.

“What I enjoy most about being Commander is the opportunity to make a difference,” Travis says. In his new role, Travis is working with the Air Force to implement new training and educational methods within the broader, nationwide ROTC program. “We have to have an education and training system that parallels the pace of change in the world around us,” he says. “Syracuse had one of the first Air Force ROTC units in the nation, and now the Air Force is allowing us to be a ‘petri dish’ and rewrite what training and education look like. There is a great opportunity to make a difference and change the future of Air Force ROTC.”

Travis is certainly up for the challenge. In 2017, his research, conducted along with Major Matt Elmore, helped support Pilot Training Next, a part of the Air Force’s initiative to reimagine how cadets are trained. The program uses emerging technologies like virtual reality and artificial intelligence to train airmen better and faster and foster deeper learning. 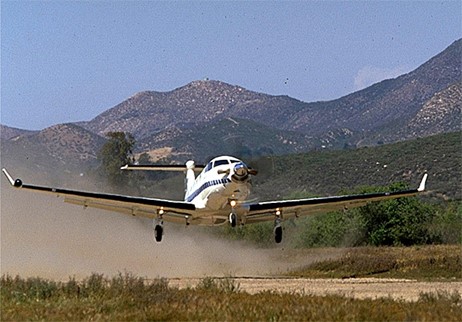 A Special Operations Aircraft, one of the planes Sheets has experience flying.

“In Detachment 535, our mission statement is ‘Joint Minded Aggressive Learners Ready to Lead,’ which means we aim to build collaborative, team-oriented problem solvers who know how to ask the important questions,” Travis says. Part of this preparation includes outside professional development opportunities that operationalize the training and education candidates receive on campus.

As someone who believes support for the military is equally important as service, Travis has been impressed by Syracuse’s commitment to service members and their loved ones. He’s especially excited about the new National Veterans Resource Center, which will house resources and professional development opportunities for veterans and military-connected students. “Syracuse’s commitment to helping military-connected families is one of the best I’ve seen in the nation,” he says. “There is something special going on here and I’m really honored to be a part of it.”

While Travis and his family are new to Syracuse, the community has provided a warm welcome—Travis has started calling the city “the best big small town in America.”

“There is an integrity in Syracuse that you don’t see very often. People are genuine and really care how you’re doing,” he says. This support has made all the difference, along with that of Travis’ wife, Kimberly, and their two children. “Military spouses and our families serve more than we do, and they face lonely periods when we’re deployed,” he says. “It takes a team, and it starts with the support we get from our loved ones.”

With the support of his family and the community at Syracuse, Travis is well positioned to continue making a difference and having a positive impact on the people around him, including the candidates of Detachment 535.