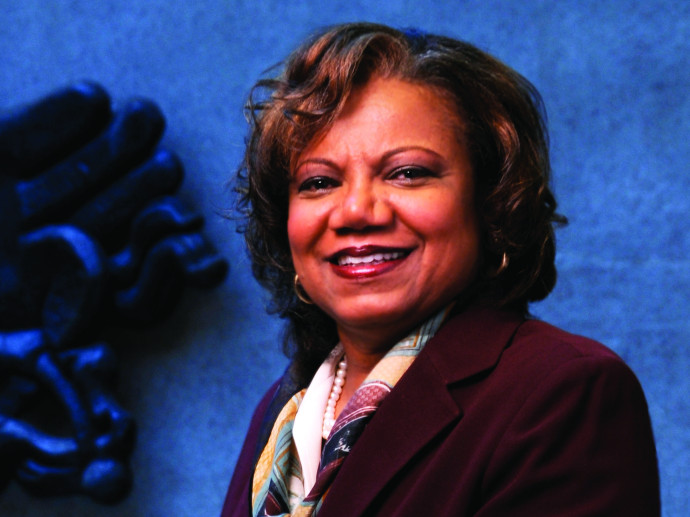 Used primarily to recruit and support Newhouse students from socioeconomically disadvantaged populations and other underrepresented groups, the program will provide under-resourced, talented students the opportunity to attend Syracuse University and the Newhouse School debt-free. The program is supported by both school resources and donor funds.

The program is named in honor of late Newhouse dean Lorraine Branham, who died in April 2019. “Lorraine was a champion of access to higher education, and I’m confident this new multimillion-dollar investment would make her proud,” says Lodato.

This new program will supplement the Lorraine E. Branham Endowed Scholarship for Newhouse students from underrepresented populations, which was created in Branham’s memory by alumni and friends following her death.

Through the new program, as many as 10 scholarships will be awarded each fall; recipients will be known as Branham Scholars. The program will also support “Finish Line” scholarships for rising juniors and seniors who need financial assistance to complete their education at Newhouse. In addition, a merit-based Branham Prize will be awarded to an incoming first-year student as recognition of his or her accomplishments in the classroom and the communications space while in high school.

“Lorraine was passionate about making diversity a priority across the school,” says Amy Falkner, senior associate dean for academic affairs, who worked with Branham for 11 years. “It has always been a plank in our strategic plan and [led to] many of the initiatives and accomplishments that came about—in curriculum, recruitment and retention of students and faculty, scholarships, internships, guest speakers and speaker series.”

Payton Campbell, now a senior in graphic design, says Branham helped facilitate her enrollment at Newhouse, and was an inspiration to her. “Having a Black woman as the dean of my prestigious communications school meant everything to me. She motivates me to thrive and excel in my career every day,” says Campbell, who is president of the SU chapter of the National Association of Black Journalists. “Dean Branham dedicated her life to helping students of color like me gain access and superb training to reach our highest goals in the industry.”

Angela Y. Robinson ’78, director of operations for the National Association of Black Journalists, recommended Branham for the dean position in 2008. “With great conviction, Lorraine worked tirelessly to recruit, retain and support all students, especially students from underrepresented communities—students too often overlooked. She understood the urgency of not simply opening the door, but removing the door altogether,” Robinson says. “Because of this scholarship program, her legacy endures.”

The establishment of the Branham Scholarship Program is one of several initiatives aimed at expanding and enhancing diversity, equity and inclusion at the Newhouse School.

Beginning during Branham’s tenure, the school strengthened curricular content in diversity, adding the Race, Gender and Media course, which is required for all students. Industry partnerships with companies such as LinkedIn, Time Inc. and Bustle have led to internship and fellowship programs for students of color. The Newhouse Foundation Fellowship for Minorities has provided more than 100 journalism graduate students with full-tuition scholarships and on-the-job training at Advance Media New York. Margins, a mentorship group for first-year and transfer students from underrepresented communities, including students of color and LGBTQIA+ students, was formed last year.

Lodato created the Newhouse Dean’s Student Leadership Council to improve connectivity and communication between school leadership and students. He also established new Diversity, Equity and Inclusion committees on the Newhouse Advisory Board and the Newhouse 44, the school’s alumni networking and mentorship group.

In August, all Newhouse faculty and staff participated in the Prejudice Habit-Breaking Intervention with Patricia Devine, a professor of psychology at the University of Wisconsin–Madison.

“We are elevating the importance of these issues throughout our community—students, faculty, staff and alumni,” Lodato says.

Additional initiatives are in the planning stages, as outlined in Lodato’s message to the Newhouse community last summer. Those include:

“At the Newhouse School, we are dedicated to a culture grounded in inclusion and respect, and to preparing our students to enter and lead our industries in an increasingly diverse nation and world,” Lodato says.