Esports Offers Both Recreational and Educational Opportunities for Students 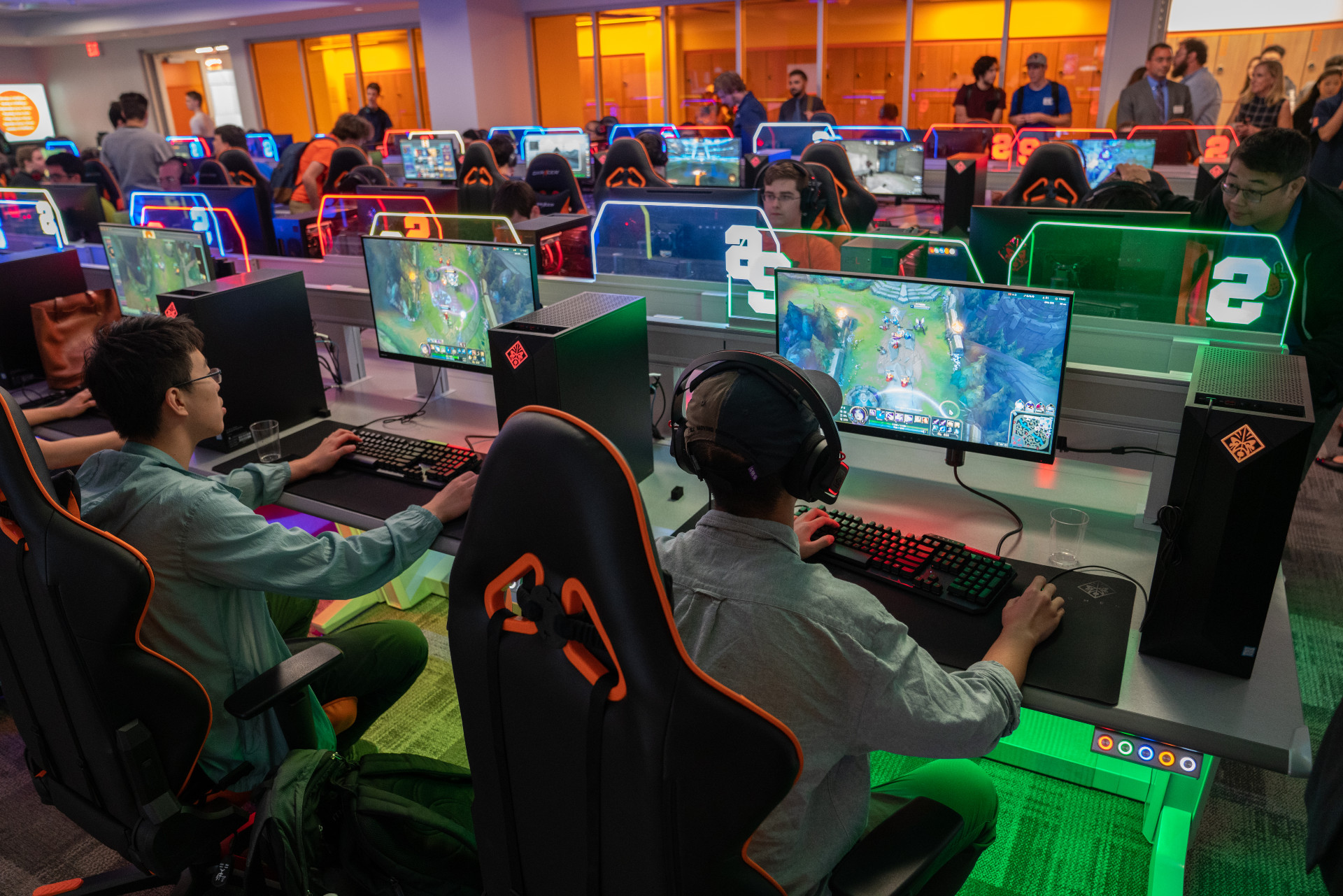 The Esports gaming room at the Barnes Center at The Arch (Please note, this image was taken prior to the COVID-19 pandemic and does not reflect current public health guidelines.)

Earlier this year, at the Adirondack Bank Center in Utica, New York, Alpha North Esports and Entertainment hosted the “Battle of the Colleges” esports tournament. Syracuse University’s Rocket League team competed in the tournament and had reached the third-place match. Captained by Scott Hushaw ’21, the team found themselves in the fifth game of a best of five series.

As the match entered its final seconds, the teams were tied. At the last possible second, Hushaw made a breakthrough to secure the victory for Syracuse. “I actually scored with zero seconds left, kind of like a buzzer beater in basketball,” he says. “And all of us stood up and started yelling. I’ll always remember it.”

This is the type of jaw-dropping excitement that the rapidly evolving world of esports can create for both players and fans around the world. The presence of esports is growing both on the global and collegiate levels. The business and production aspects of esports have massive potential for growth, and Syracuse University is working hard to harness that potential by becoming a leader in educating students to become leaders within the industry.

In April, the University partnered with Microsoft and the Electronic Gaming Federation (EGF) to partake in the EGF Collegiate Power Series esports tournament. The Syracuse University Rocket League team competed against students from universities across the country while students from the Newhouse School, the Falk College and the School of Information Studies (iSchool) got to engage in experiential learning opportunities alongside industry professionals. Newhouse students worked as broadcasters on the livestreams of the matches, and iSchool and Falk students were involved in analytics and marketing for the tournament. 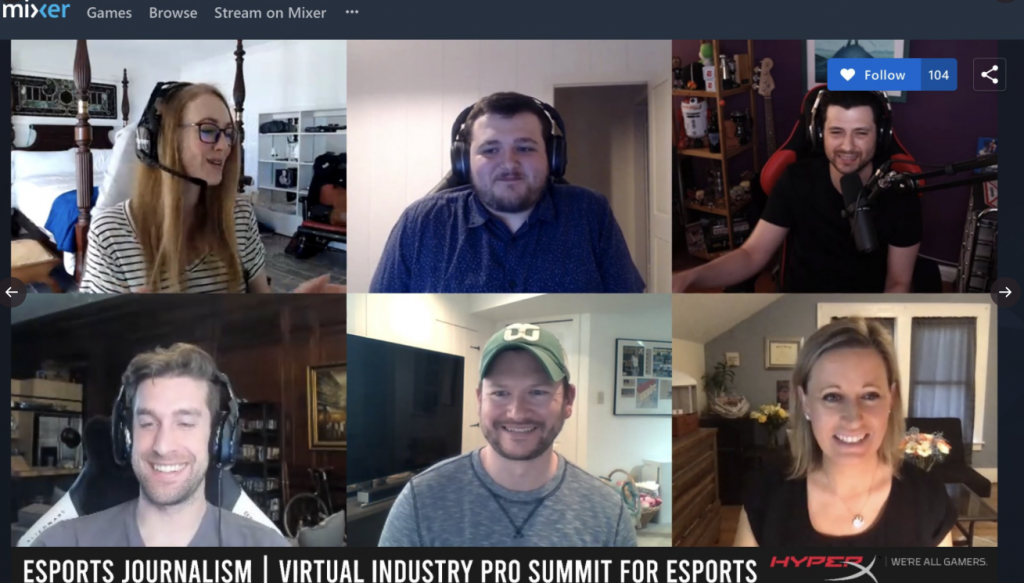 In April, the University partnered with Microsoft and the Electronic Gaming Federation (EGF) to partake in the EGF Collegiate Power Series esports tournament. In addition to the actual tournament, Microsoft and EGF held virtual panels featuring industry professionals, leaders and, on the last day, students.

“Esports is growing every day. We’re seeing it grow exponentially during this pandemic. You’ve been seeing it on linear networks on ESPN and ESPN 2,” Stomski says. “There are several careers and opportunities that are growing within the industry itself that our students should not only be aware of but should also have some experience in.”

In addition to the actual tournament, Microsoft and EGF held virtual panels featuring industry professionals, leaders and, on the last day, students. The panels discussed topics such as broadcasting and content creation in esports (a panel in which Stomski participated), the marketing side of esports and game development. “The panels had 15,000 to 18,000 people watching at a time,” Stomski says. “The turnout was absolutely wonderful and a chance for us to really come together with some esports professionals and learn from them as we start to move forward.” 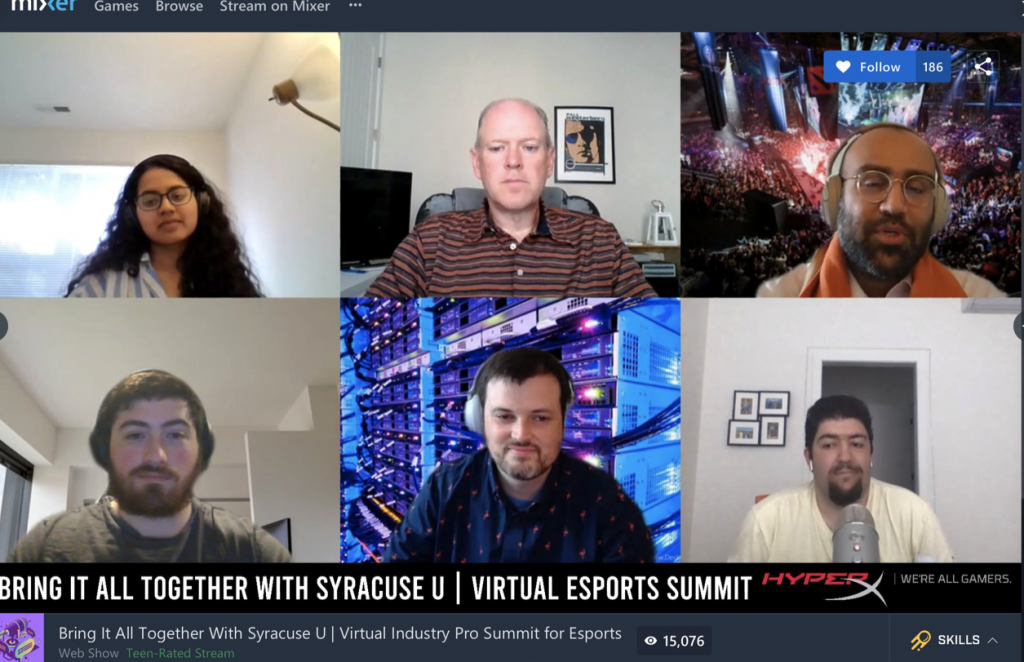 Students involved with the tournament got to speak on the panel on the last day of the tournament to discuss what they learned from the experience, why they took the opportunity, and how they felt they grew professionally. Additionally, Hushaw sat on a panel to discuss his perspective on the tournament as a gamer. Stomski says the students who participated found the experience both valuable and enjoyable. And she says the partnerships with Microsoft and EGF were very beneficial, relationships she hopes will continue for the creation of more events in the future.

The “Battle of the Colleges” tournament also offered a preview of Syracuse University’s potential to become a pioneer in educating young professionals for the esports industry. “This really showcased how esports in particular can be a good career path, not only for gamers,” says Scott Catucci, associate director of recreation in the Barnes Center at The Arch. “There’s all kinds of other opportunities that go into the broadcasting and all the background stuff. Syracuse University is positioned really well to be a leader in this area.”

Esports not only has profound potential to become a profitable industry, it has also shown its ability to bring people together. The recent addition of the esports room in the Barnes Center at The Arch has shown the power of gaming in building communities.

“You can bring people who have a passion for their hobby together to enjoy that hobby,” says Rob Snow, assistant director of esports in the Barnes Center at The Arch, Recreation. “That’s what esports at the Barnes Center is all about: that community and giving a place for the hobbyists to come together and enjoy their passion.” 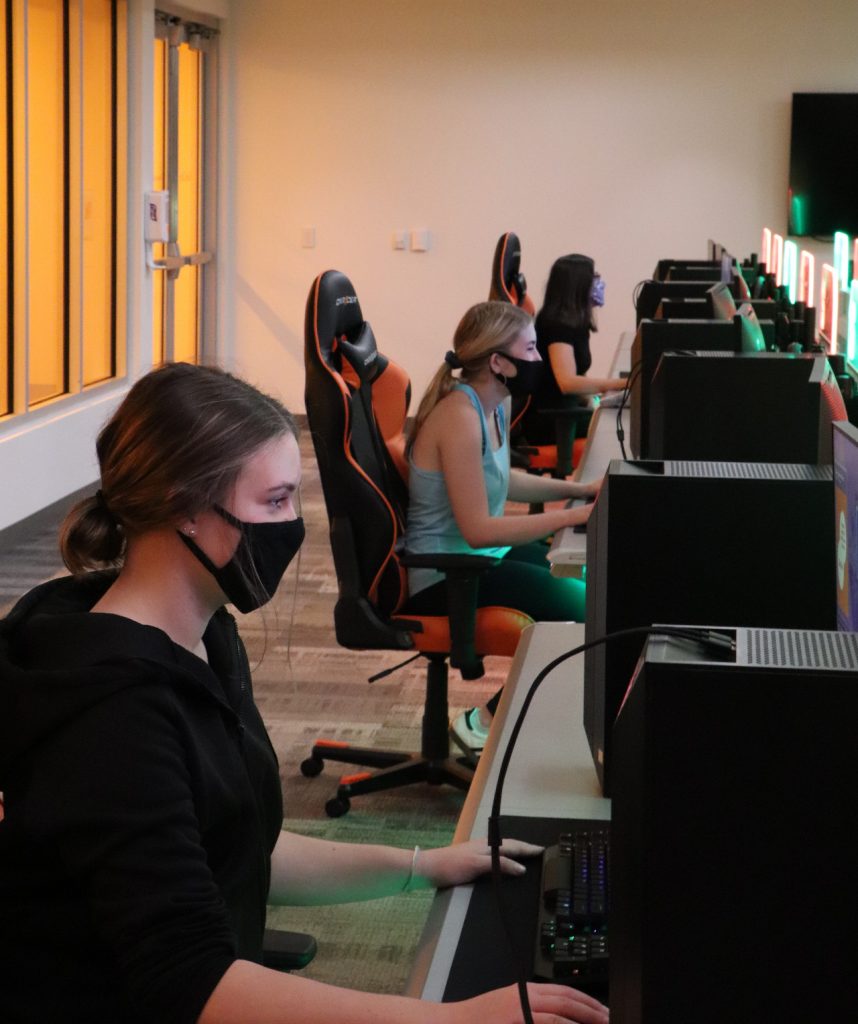 The esports room is available for use this semester by reservation only. Students can reserve six hours in advance on the Wellness Portal.

The esports room is available for use this semester by reservation only.  Students can reserve six hours in advance on the Wellness Portal.

Since it opened in September, 2019, the esports room has had more than 14,000 visitors, 3,700 of them unique visitors. Additionally, the Esports Club at Syracuse University has more than doubled its membership since the esports room opened its doors. The Esports Room and the club serve as mediums for students passionate about gaming to congregate and share their passion with other students. “People make friends here. People find their friend groups and people with similar interests,” Hushaw says. “It really is giving people a place to find somewhere that they can thrive.”

As esports continues to grow as a booming industry, more courses on the business of esports are being added Universitywide—in the Newhouse School, Falk College, the iSchool and the College of Arts and Sciences. And aspects from the educational side of esports can also be applied to the recreational side. “We’re working together as one university to be on the same page about what is out there for our students,” Stomski says. “Whether it be the Esports Club or the esports room, we need to think about how students can utilize both of these things and bring what they’re learning in the classroom to these opportunities outside of the classroom.”