The University Lectures series continues its 20th season with a virtual presentation by alumnus Thom Filicia ’93 (“Queer Eye for the Straight Guy”) on Tuesday, Oct. 27, at 7:30 p.m. ET.

Registration is required to attend the virtual lecture. Filicia’s appearance is co-sponsored by the College of Visual and Performing Arts and is part of the University’s LGBTQ History Month. 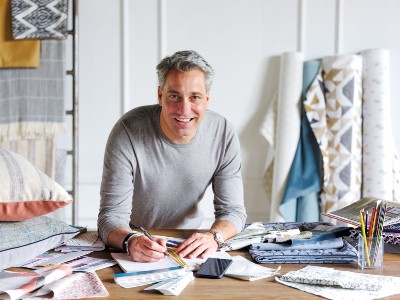 Filicia started his career at renowned design firms Parish-Hadley, Robert Metzger and Bilhuber & Associates. He launched his acclaimed enterprise Thom Filicia Inc. in 1998 and emerged as one of today’s most influential and respected interior and product designers. His projects range from residential and hospitality to commercial interiors all over the world.

His design portfolio includes such projects as the VIP Suite for the USA Pavilion at the World’s Fair in Aichi, Japan; an eco-friendly apartment for Riverhouse, Manhattan’s first premium (LEED-certified) “green” luxury condominium tower; and the Delta Sky Decks at John F. Kennedy International Airport in New York and Hartsfield-Jackson Atlanta International Airport.

Filicia has been praised as a top designer and international tastemaker. He gained widespread fame for his role as the interior design expert on the Emmy Award-winning “Queer Eye for the Straight Guy,” as well as for his television work for Style Network, HGTV and most recently Bravo’s “Get a Room with Carson & Thom.”

He is also the driving force behind the Thom Filicia Home Collection, which includes furniture, artwork, bedding, textiles and wallcovering, and has a flagship showroom, called Sedgwick & Brattle, at The New York Design Center.