Philanthropic Spirit that Never Loses Sight of the Goal 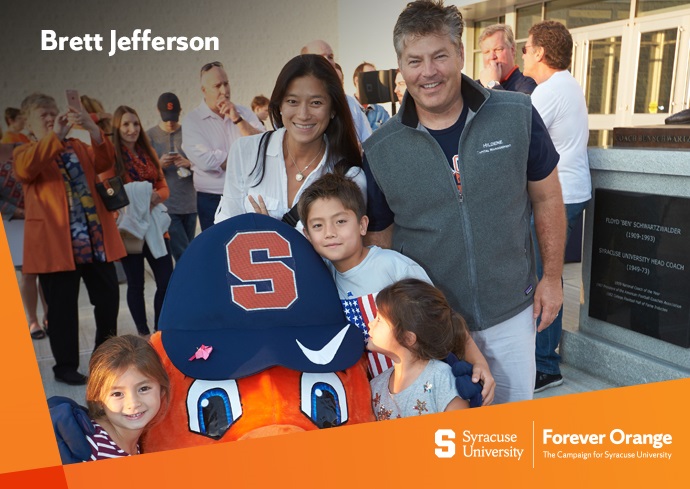 Brett Jefferson with his family, at a University event. [Please note, this image was taken prior to the COVID-19 pandemic and does not reflect current public health guidelines.]

Brett Jefferson ’88 likes to cite the book titled “David and Goliath” by Malcolm Gladwell, when reflecting on life’s challenges that confronted him as a boy. The book explores the power of the underdog and the role of adversity in shaping our lives. Jefferson says it helped shaped him into a highly successful executive and generous philanthropist.

Jefferson’s recent pledge of $2.5 million to the Syracuse University Men’s Lacrosse Coaches Endowed Fund and the Athletics Framework pays tribute to the program that shaped this “underdog” and kept him on a path to personal and professional success.

“I was not a great student,” explains Jefferson. “Even as a young boy, I struggled in the classroom. They tried to label me with a learning disability, but I rebelled against that.” He was determined to prove himself and found that opportunity in lacrosse, first in public school, then at boarding school. “It was a really competitive environment. Everyone had aspirations and goals. I would do everything I could to become a better player.”

And then he met the legendary Syracuse University lacrosse coach Roy Simmons Jr., who recruited him. “He had me at ‘hello,’” recalls Jefferson. In 2017, in tribute to the man Jefferson describes as a uniquely great motivator, Jefferson established the Syracuse University Men’s Lacrosse Coaches Endowed Fund to name the head coaching position after Roy Simmons Jr. and continue to recruit and retain the best coaches in the country.

The newest pledge, which is being made through The Catherine Jefferson Foundation he founded, will ensure that Syracuse lacrosse remains best-in-class, and a thriving part of the Athletics Framework for student-athletes for generations to come.

Syracuse lacrosse provided life lessons for Jefferson. “I was recruited as a goalie for this nationally recognized team, but I was never the starting goalie,” says Jefferson. “Big lesson: you don’t always get the job you want, but you make the best of the job you’ve got.” He says Coach Simmons encouraged the team to take risks, learn from mistakes and failures, try harder and do better next time.

Here’s where Jefferson likes to cite another Malcolm Gladwell book, “Outliers,” and the 10,000-hour-rule. It’s essentially a metaphor for the extent of commitment necessary to succeed, and the importance of practice to overcome and improve upon our weaknesses.

To endure, to take and manage risks, learn from failure and never lose sight of the goal—these characteristics would serve Jefferson well as he pursued a career in business and finance. Though he earned a B.A. in 1988 from the College of Arts and Sciences, where he majored in English, and describes himself as not much of student, he chased opportunities to prove himself. He applied three times to the graduate program at Northwestern University before he was accepted and, with perseverance, earned a master of management degree from the J.L. Kellogg School of Management.

“Syracuse Athletics and our men’s Llacrosse program are grateful for Brett’s tremendous support,” says Syracuse University Athletics Director John Wildhack. “His story of how our men’s lacrosse program helped prepare him for the success he’s achieved is testament to the importance of providing a best-in-class experience for our student-athletes.”

Jefferson founded the private Catherine Jefferson Foundation in Darien, Connecticut, to support a variety of causes including education, sports and recreation, human services, health, and public safety. “My grandmother, mother, wife and daughter are all named Catherine,” Jefferson says. A long line of women who supported his growth.

“My father was a seaman who was gone at sea six months out of the year,” says Jefferson. “He met my mother in South Africa and brought her to Rye, New York, where she had to figure out how to adapt to a new country and raise the family.”

Similarly, Jefferson learned to adapt to challenging environments, build on character strengths, prove himself to those willing to take a risk on him and never lose sight of the place he loved more than anywhere: The Goal.