Oct. 16 Is Shark Day at the LaunchPad 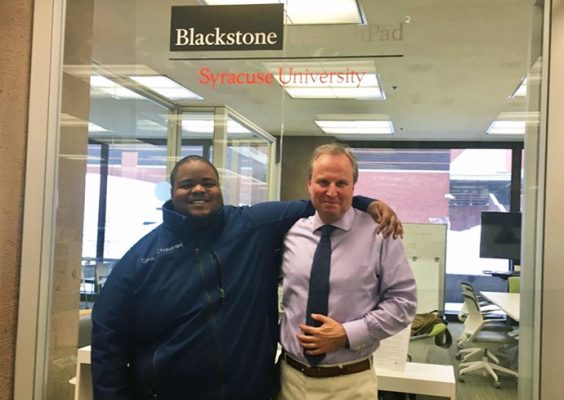 About the 2020 ‘Cuse Tank competition

The annual Family Weekend ‘Cuse Tank competition features 20 student teams pitching their ideas to successful entrepreneur judges. The “Sweet Sixteen” semi-finalists and four “Wild Card” teams will pitch “Shark Tank” style over Zoom on Friday, Oct. 16. A distinguished panel of LaunchPad family judges will narrow the “Sweet Sixteen” teams down to the “Final Four.” Judges will award $10,000 in prize funding through a gift to SU Libraries from Todd Dagres, co-founder and General Partner of Spark Capital.

Those interested in watching the Zoom competition must e-mail in advance to LaunchPad@syr.edu.

LaunchPad alumnus and Libraries Advisory Board member Josh Aviv ’15, G’17  will appear on Oct. 16 at 8 p.m. on the season premiere of ABC’s “Shark Tank.” Aviv will be pitching his company, SparkCharge, to Kevin O’Leary, Barbara Corcoran, Daymond John, Robert Herjavec, Mark Cuban, Lori Greiner and a celebrity guest entrepreneur. SparkCharge makes portable, ultrafast charging units for electric vehicles and has been featured in major technology and clean energy publications. Aviv developed and launched SparkCharge as a Syracuse student working closely with the LaunchPad. He built his first prototype at the SU MakerSpace and set up his first engineering lab at the Syracuse Center for Excellence in Environmental and Energy Systems. He is the first SU student to accelerate from the LaunchPad to Techstars to the stage of Shark Tank. Aviv was also the recipient of the Syracuse University Generation Orange Award, which recognizes Generation Orange alumni who have made an impact on campus and in their communities through their volunteer work and philanthropy. The award was presented at a signature event during 2019 Orange Central weekend.

“Without the LaunchPad and Techstars, there would be no SparkCharge, and that’s simply the way it is,” says Aviv. “I’m excited to bring it back to where it all started for SparkCharge. I want to inspire a new crop of student startups to aim for the stars. Pitching on the stage of Shark Tank was my goal, from my very first competition in the LaunchPad.”

Aviv continues to work closely with the Syracuse LaunchPad as an entrepreneur in residence, mentoring young University startups as he scales SparkCharge from its corporate headquarters in Boston and manufacturing facility in Buffalo. SparkCharge also has a residency at the Plug and Play Tech Center, a renowned industry-focused accelerator program in Silicon Valley, and a residency at the Los Angles Cleantech Incubator.

Aviv recently established a clean energy prize through SU Libraries for a student team launching an innovation that tackles sustainability and climate change through a clean energy solution. It will be awarded for the first time at the upcoming LaunchPad Impact Prize competition on Nov. 13, 2020.

As a student, Aviv won the grand prize in the New York Business Plan Competition, as well as top honors in more than seven business competitions while earning his degrees. He won the top prize of $1 million at 43North, was the recipient of a NYS FuzeHub Commercialization Competition award, won the California Climate Cup, Startup Fest’s global pitch competition, and Plug and Play’s clean energy innovation award. After Aviv won the first Blackstone Launch Pad and Techstars Training Camp global pitch competition, he was selected for the prestigious Techstars accelerator program in Boston.

Aviv originally auditioned for Shark Tank in Las Vegas last winter. He had attended the Consumer Electronics Show and was speaking on a panel for the Blackstone LaunchPad & Techstars. There he saw the call for Shark Tank and decided to give the open audition a try. He then spent the next six months moving through various competitive rounds to make it to the finals. He was eventually selected to appear in Season 12, which was filmed late this summer at a secret location in Las Vegas.

Join the LaunchPad for a special “Shark Tank” Zoom watch party on Oct. 16 at 8 p.m. and share the suspense as Josh Aviv takes on the Sharks: http://bit.ly/josh-sharktank

About the Blackstone LaunchPad and Techstars at Syracuse University Libraries

The Blackstone LaunchPad and Techstars at Syracuse University Libraries is the University’s innovation hub, connecting the entire campus resource-rich ecosystem with a global network that provides support for aspiring entrepreneurs, inventors, and creators. The program serves faculty, staff, students, and alumni across disciplines who are interested in innovation, invention, entrepreneurship, venture creation, careers, entrepreneurial skills, diversity, equity, inclusion, and taking ideas from concept to commercialization. The program supports a key pillar of Syracuse University’s Academic Strategic Plan to create an innovation ecosystem across the institution that prepares participants to be trailblazers in an entrepreneurial world.