A Woman of Many Firsts: Focusing on Philanthropy 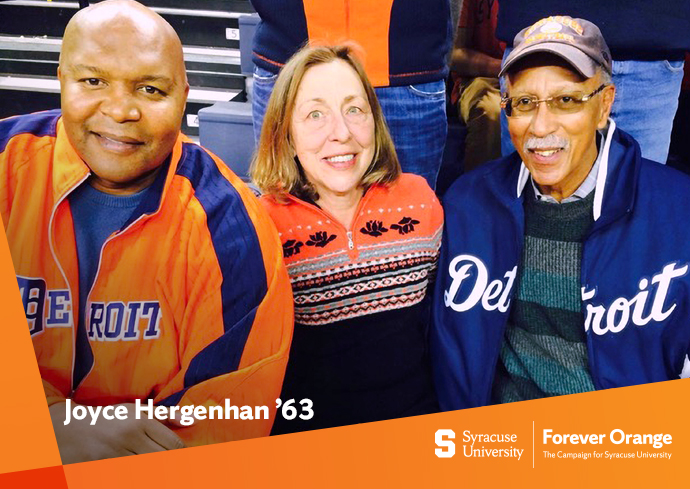 Joyce Hergenhan’s professional career was filled with firsts. The young woman who graduated from Syracuse University in 1963 advanced quickly in her career, first in journalism and then corporate communications, often the first female in executive positions. She rose quickly enough—and with influence—to be named by Glamour magazine an “Outstanding Young Working Woman in America” in 1979 and included in Business Week’s list of “Fifty Women to Watch” in 1987. Yet, she remained “under the radar” among Orange alumni.

Then, in 1988, she decided to write a personal letter to then Chancellor Melvin Eggers. “I told him that I had loved my time at Syracuse University, and I remained a passionate fan of the basketball team,” recalls Hergenhan. She figured the Chancellor would want to know that she’d been approached often by Columbia University (where she earned an MBA as a commuter student) with engagement and gift opportunities. But her emotional connection remained with the Orange. “I essentially put myself on his doorstep saying ‘Adopt me!’”

From that point on, Hergenhan became well-known and much appreciated as one of Syracuse University’s most avid and generous supporters. Her newest gift—a $2 million pledge to support the new Athletics Framework—is in addition to more than $7 million in gifts to the Newhouse School, various scholarship funds and the athletics department.

Hergenhan has served the University in many other ways as well, and is now a life trustee and a member of the Newhouse Advisory Council. She previously served on the Athletics Advisory Board, the Athletic Development Advisory Committee, the Metro NY Advisory Board and the Whitman Advisory Council. She also sat on the National Campaign Council for the Commitment to Learning Campaign and served on the Institutional Advancement Subcommittee.

Hergenhan’s $2.5 million planned gift in 2018 to establish the Hergenhan Family Endowed Scholarship at the Newhouse School offers insight into the depth of her loyalty to Syracuse University. She explains the scholarship is intended as a first preference for children of firefighters and police officers. She herself was the daughter of a small town police officer, and her uncles were dedicated volunteer firefighters. She had the promise and potential—and the grades—to set her sights on a Syracuse University degree, but not the money. She received a NY State Regents Scholarship and Syracuse filled in the rest. The doors were open for her to walk through and prove herself most worthy.

She’d aspired to a career in journalism from middle school, when she was a stringer for a local newspaper. She knew Syracuse could help her achieve her dreams. “My Newswriting 101 class taught me how to write, and my Constitutional Law course taught me how to think,” she recalls fondly. She was an editor of The Daily Orange but her first job interview with the Associated Press just before graduation provided a searing reality check. “They were interviewing on campus, and I went to the interview and the first thing the man said to me was, ‘I don’t know why I am wasting my time talking with you. I’ve never hired a woman and I never will.’ And in 1963 it was perfectly legal for him to say that,” she says.

But nothing could stop this dynamic, smart and driven young woman from proving her value—first as a journalist, then working in politics and then public affairs, starting her corporate career at Con Edison, New York’s power company. Ultimately, she was recruited by General Electric and persuaded by the famous CEO Jack Welch to take the job as a senior communications executive after passing a test of sorts—tested because she was a woman.

“I met Jack at the New York City restaurant Le Perigord Park,” she recalls. “He had a large envelope with him, and pulls out a paper. He said, ‘It says here you are a sports trivia expert. Are you?’ I said, ‘Try me.’ He said, ‘Who played second base for the 1946 Boston Red Sox?’” She passed the sports trivia test at that lunch. “Now, looking back, I believe he was reassuring himself that I could fit into the macho culture. And he knew that a woman who knew a lot about sports would be less different.” Hergenhan was Welch’s trusted advisor, chief communicator and president of the GE Foundation during the decades when GE became the most respected and admired company in the world.

She says GE’s former generous gift-matching program allowed her to provide philanthropic support to places and causes she believed in. Of course, her alma mater topped the list. She hopes her newest $2 million gift commitment to the Athletics Framework will significantly enhance the student experience for generations of student-athletes to come, most especially those who train for and compete in Olympic sports, such as soccer, field hockey and track and field. “They are sometimes overlooked,” says Hergenhan. “I was glad to see this as an option offered by Athletics Director John Wildhack as part of the framework and the future for athletics at Syracuse University.”