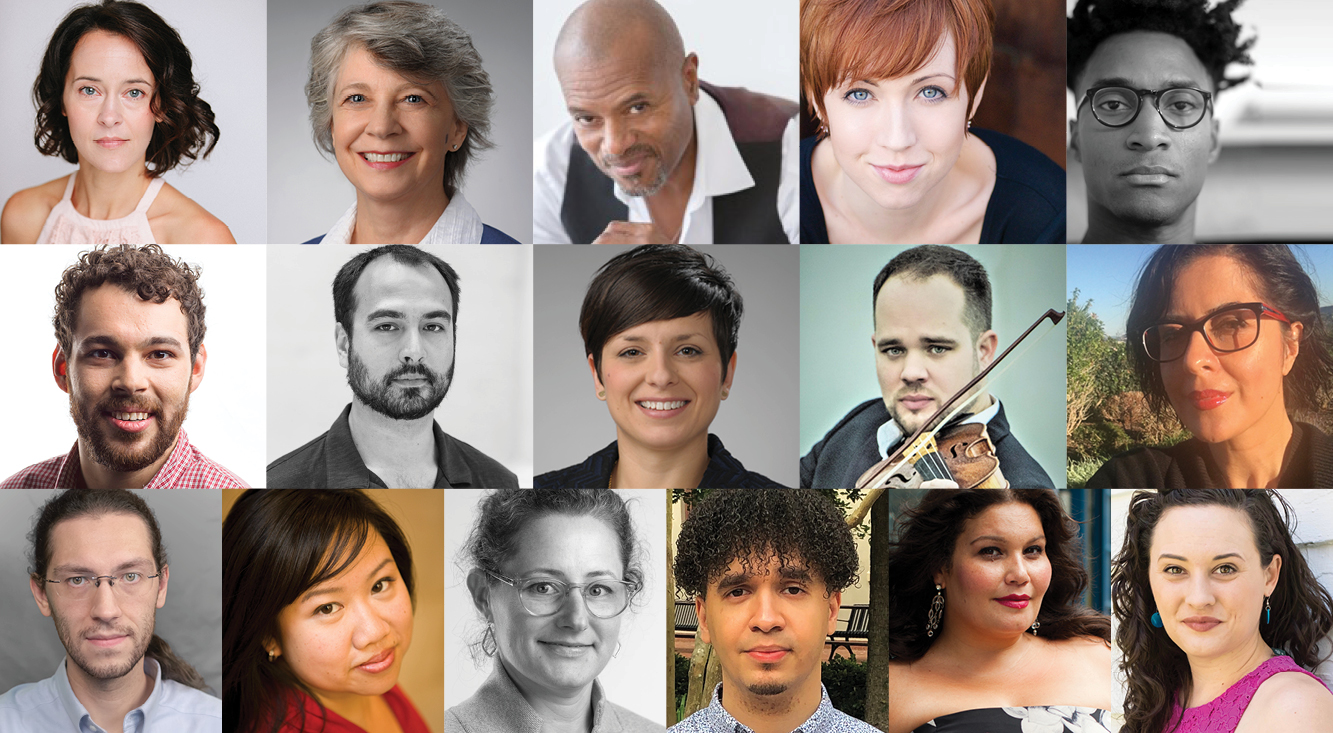 Christine Albright-Tufts joins VPA as a tenure-track assistant professor of acting in the Department of Drama. For the last 20 years, Albright-Tufts has worked as an actress at Arena Stage, the Goodman Theatre, Berkeley Rep, Seattle Rep, the Marin Theatre Company, the Mint Theatre Company, the La Jolla Playhouse and many others. Since 2006 she has been a company member of the Oregon Shakespeare Festival, where she has been a performer, director and teaching artist. She holds an M.F.A. in acting from the University of California-San Diego and a B.S. in performance from Ball State University.

Marty Blake transitions to a new role in the School of Art as a non-tenure-track assistant teaching professor of illustration. Previously, Blake was an instructor of illustration in the school. Blake has worked as a freelance illustrator and graphic designer for many years. Her work has been honored with inclusion in the exhibition of the Society of Illustrators, as well as publications including American Illustration, Print magazine, 3×3 and Communication Arts. Blake earned an M.F.A. in illustration from Syracuse University and a B.A. in printmaking from Kirkland College (now Hamilton College).

Rufus Bonds Jr. will serve as a tenure-track assistant professor of musical theater in the Department of Drama. He previously served as a visiting assistant professor in the department for 2019-20. Bonds is an actor, director and writer whose Broadway credits include “Rent,” “Once on This Island” and “Parade,” for which he won the Drama Desk Nomination for Best Supporting Actor. Bonds earned an M.F.A. in directing from California State University at Fullerton and a B.S. in chemistry from the University of Cincinnati. He has trained with such acclaimed artists as Hal Prince, Michael Grief, Julie Taymor and Cameron Mackintosh.

Kiira Schmidt Carper is an assistant professor of musical theater in the Department of Drama beginning this fall. Prior to joining VPA, Schmidt was an assistant professor of practice at Texas State University, where she taught musical theater jazz, ballet technique, dance anatomy and choreographed “Ragtime,” “Legally Blonde,” “Guys and Dolls” and “The 25th Annual Putnam County Spelling Bee.” Her Broadway performance credits include the Grammy and Tony Award-winning “The Mystery of Edwin Drood” (2012 revival); “Follies” (2011 revival); and “Anything Goes” (2011 revival). She earned a B.F.A. in musical theater (with honors) from Elon University.

Logan Ryland Dandridge joins the Department of Transmedia this fall as a non-tenure-track assistant teaching professor of film. Prior to joining the department, he was an assistant professor of art and art history at DePauw University, where he taught courses in video and digital art. Dandridge is a moving image artist whose films interpret the nuances of African American culture through the poetics and aesthetics of experimental cinema. His research interrogates various histories through a combination of assemblage, superimposition and multi-channel orientation. He earned an M.F.A., with distinction, from the University of Oxford’s Ruskin School of Art. He also earned a B.A. in film and media studies from the University of Virginia.

Reid Davenport joins the Department of Transmedia as a non-tenure-track visiting assistant teaching professor of film. He is in production of his sixth and seventh documentaries exploring the perspective of people with disabilities. His feature film “I Didn’t See You There” was awarded the Doc Society’s New Perspectives Grant and was selected to be included in the 2020 IFP Week. Davenport was named a 2020 Points North Fellow and a 2020 Bay Area Video Coalition MediaMaker Fellow in connection to the project. He holds an M.F.A. in documentary film and video from Stanford University and a B.A. in journalism and mass communication from George Washington University.

J.V. Decemvirale joins the School of Design as a faculty fellow in museum studies. Decemvirale is an active curator whose primary research focus includes Latinx art, African American art, the history of community art spaces and current movements in the decolonization and democratization of museum collections. He is currently working on completing his Ph.D. in the history of art at UC Santa Barbara, where his dissertation focuses on the methods and tactics of community-based cultural organizing and popular arts activism in Los Angeles. He earned an M.A. in curating contemporary art from the Royal College of Art and a B.A. in art history from New York University.

Jennifer DeLucia transitions to a new role in the VPA as a tenure-track assistant professor of art therapy and chair of the college’s new Department of Creative Arts Therapy. She joined the college in 2018 to develop the department as well as a new hybrid graduate program in art therapy and was a professor of practice in 2019-20. At the University’s Institute for Veterans and Military Families, DeLucia serves as curator of the National Veterans Resource Center’s gallery and research associate. She earned a Ph.D. in art therapy from Mount Mary University, an M.S. in art therapy from Nazareth College and a B.F.A. in studio art from SUNY College at Brockport.

William Knuth begins a new role as a tenure-track assistant professor of violin and viola in the Rose, Jules R. and Stanford S. Setnor School of Music. Previously he was an assistant teaching professor in the Setnor School. As a member of the chamber music group Duo Sonidos, Knuth, along with guitarist Adam Levin, has performed extensively throughout the U.S., Europe, Africa and South America. Knuth’s and Levin’s most recent album, “Duo Sonidos: Wild Dance” (NAXOS, 2019), quickly rose to No. 3 on the Billboard classical albums chart. Knuth earned an M.M. from the New England Conservatory of Music, a Fulbright certificate for work at the Vienna University of Music and Performing Arts and a B.M. from the Eastman School of Music.

Soudabeh Moradian begins a new role as a tenure-track assistant professor of film in the Department of Transmedia. Moradian joined the department in 2019 as an assistant teaching professor of film. She is a director, producer, screenwriter and editor who began her career as a filmmaker in 1996 and has since created more than 70 documentaries, short films, TV series and feature films. Her films—including “Doomsday Machine” (2009), “Story of the Land on Ashes” (2001), “Mahin” (1999) and “Polaris” (2016)—are mainly based on social justice, women’s rights and psychological impact of war. She earned an M.F.A. in film and video from California Institute of the Arts and a B.S. in cinema from the School of Cinema and Theatre at Tehran University of Art.

Josef Moro joins the Department of Drama as a non-tenure-track visiting assistant teaching professor of theater design and technology. Moro designs lighting, projection and scenery and works in theater, opera, ballet, museums and corporate events. He is a production photographer, videographer and content creator who has worked on and off Broadway, with major ballet companies and live events around the world. He has taught at the Yale School of Drama and recently created a projection design program while an assistant professor of design at Cornell University. He holds an M.F.A. in theater design from the Yale School of Drama and a B.A. in theater arts from Cornell University.

Wendy K. Moy joins VPA and the School of Education as a tenure-track assistant professor of music education. Before joining Syracuse University, Moy was an associate professor of music at Connecticut College, where she also was the director of choral activities and head of music education. Moy’s research focuses on the culture of singing communities and the cultivation of social capital in successful choral organizations. She has presented her ethnographic research on the Seattle Men’s Chorus—the largest gay men’s chorus in the world and the largest community chorus in North America— at several national conferences. She is co-founder and co-artistic director of the professional chamber ensemble, Chorosynthesis Singers. She earned a D.Mus in choral conducting from the University of Washington, an M.M. from Westminster Choir College of Rider University and a B.A. in music education from Seattle Pacific University.

Emily Goldstein Nolan joins the Department of Creative Arts Therapy as a non-tenure-track professor of practice in art therapy. Prior to joining VPA, Nolan was a tenured associate professor at Mount Mary University. Her research focuses on the integration of clinical and community mental health and art therapy as a way to create access to care. She is founder of Bloom: Center for Art and Integrated Therapies, LLC, an organization that focuses on providing access to mental health care and art therapy. Nolan earned a doctorate in art therapy from Mount Mary University, an M.A. in counseling psychology from Adler University and a B.F.A. in art education from the University of Illinois in Urbana-Champaign.

Keven James Rudrow joins the Department of Communication and Rhetorical Studies as a non-tenure-track assistant teaching professor and affiliated faculty in the LGBTQ studies program. Prior to joining VPA, Rudrow was a doctoral student at the University of Memphis, where he taught rhetoric in popular culture and oral communication. His teaching and research explore contemporary discourses concerning race, gender and sexuality in American popular culture, emphasizing discourses about Black masculinity in relation to vulnerability and resistance in mainstream hip-hop music. He earned a Ph.D. in communication from the University of Memphis and M.A. and B.F.A. degrees in communication from Valdosta State University.

Marianne Solivan begins a new role in the Setnor School of Music as a tenure-track assistant professor of jazz voice performance. Previously, she was a part-time instructor in the Setnor School. Solivan has performed and recorded as a vocalist with renowned musicians including Christian McBride, Peter Bernstein, Jeremy Pelt, Bruce Barth, Gregory Hutchinson, Jonathan Blake, Xavier Davis, Michael Kanan, Steve Wilson, Gene Bertoncini and Lewis Nash, among many others. She has appeared at iconic jazz locations including Smoke Jazz and Supper Club, Smalls Jazz Club, Dizzy’s Club Coca Cola, Birdland and The Blue Note. She earned an M.A. in jazz studies from the New England Conservatory and a B.A. in performance and music education from Berklee College of Music.

Kathleen Wrinn transitions to a new role in the Department of Drama as a tenure-track assistant professor of musical theater. Previously, Wrinn was a part-time instructor in the department. She has worked professionally as a performer and teaching artist throughout the Chicago area, including spending three years as an actor/deviser with the Lecoq-based physical theater company Theater Unspeakable. She currently serves as the directory manager for MaestraMusic.org, a group that provides support, visibility and community for women in the musical theater industry. She holds an M.F.A. in musical theater writing from New York University’s Tisch School of the Arts and a B.F.A. in musical theater from Syracuse University.