A Student Veteran’s Life Dedicated to Serving Others

Time management is one of the many crucial life skills that students practice during college–right up there with budgeting and knowing how to make a dollar stretch as far as possible. Between academic requirements, social obligations and even a job, the demands on a college student’s life can seem endless. Now, add on responsibilities to a spouse, two young children and managing a peer advising network to get an idea of just how busy Dan Rubio is. 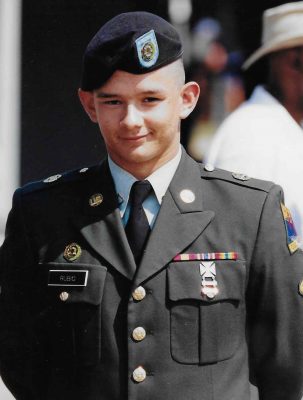 Rubio is one of the many student veterans here at the University using his Post-9/11 G.I. Bill benefits to pursue his academic goals. In his case, this means a dual major in biology and environment, sustainability and policy in the College of Arts and Sciences and the Maxwell School of Citizenship and Public Affairs. Rubio is also the team leader for Peer Advisors for Veterans Education (PAVE), a peer support network that connects incoming undergraduate student veterans on campus with other student veterans who can help them navigate college life, address challenges, refer them to appropriate resources on and off campus, and provide ongoing support.

“The work-life balance can get pretty tough,” says Rubio, who served for 13 years in the U.S. Army. “There’s always the concern that something will happen when my wife is busy, and I’ll have to drop everything to rush back home.”

For Rubio and his family, home is currently at Fort Drum, roughly an hour’s drive north from Syracuse, where his wife, Grace Rubio, is stationed as an active-duty soldier. Rubio’s commitments keep him around campus for the most part, and he commutes back to the Fort Drum area every other weekend to spend time with his family or they come down to see him, meaning most nights he is saying goodnight to his children, Daniel and Danica, through video chat.

During his time in the Army, Rubio was initially assigned as a tank crewman. However, because tanks have not recently been a major piece of U.S. strategies overseas, he eventually ended up serving as a truck driver. When he returned, he began his educational pursuits at Jefferson Community College in Watertown, New York, where he earned an associate degree and then set his sights on earning a bachelor’s degree.

As a veteran, Rubio was drawn to Syracuse University’s focus on recruiting and educating veterans. “From my research, I learned Syracuse was one of the best places for veterans,” Rubio says. “I didn’t want to put all my eggs in one basket, so I applied to other places, but once I was accepted by Syracuse, that was it. I knew I wanted to come here.” 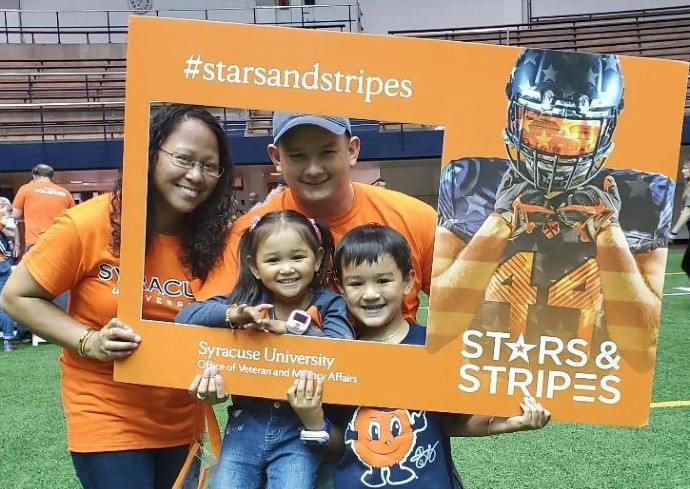 Dan Rubio with his wife, Grace, and children Daniel and Danica. [Please note, this image was taken prior to the COVID-19 pandemic and does not reflect current public health guidelines.]

One thing many veterans talk about after leaving the service is missing the camaraderie and community that comes along with the shared experience of serving in the military. PAVE and the Student Veterans Organization (SVO) are two Syracuse programs that help student veterans integrate into a welcoming environment that lets them know they are not alone.

“In the military you have friends all over the country, and even all over the world. Here, it can get kind of lonely at times. That’s why I like PAVE and the SVO,” Rubio says.

After a year of volunteering with PAVE, the team leader role opened. “When the time came, the last team leader asked me if I’d apply for the position. I enjoy helping people and assisting with any problems when they need it. That was something I enjoyed in the military and still enjoy now,” Rubio says. As the new team leader, he serves as an ambassador for the program and pairs peer advisors with new student vets on campus.

That same desire to help others and be in service to something larger than himself is part of Rubio’s drive toward his dream career. By majoring in the environmental sustainment and policy program, Rubio focuses on policy issues and how legislation drives conservation efforts in the United States.

“I’d like to get into environmental conservation, possibly through the Environmental Protection Agency,” Rubio says. “If not, I’d like to head to somewhere like Florida where there are some pretty endangered eco-systems.”

One might think that Rubio already has a full plate, but he does not stop there. “I have a campus job where I have a whole non-veteran thing going on,” Rubio says. “I work at the student center, where I’m the guy that sits behind a desk and helps students find their way around. Hopefully in the next semester or two I can move up, become a lead and help manage the staff.” 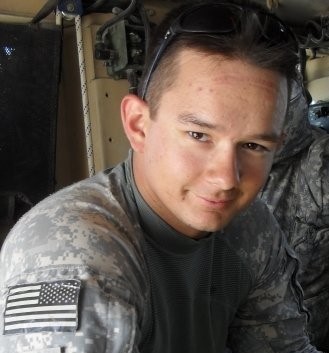 During his 13 years of service, Rubio spent time overseas on deployments to the Middle East. His second deployment to Iraq had a substantial impact on him.

“My second deployment was more humanitarian, so it felt like we were actually doing something that mattered,” Rubio says. “We were doing stuff like bringing food to people who really needed it, so you could see the impact you were having on people.”

Having already experienced uniquely challenging times, student veterans often bring that experience to the classroom to not only better understand the lessons, but also to help their fellow students understand different perspectives.

“Really it’s just having more life experience and experiencing life under stress,” he says. “I don’t really stress out about projects or tests. Sometimes I see fellow students freaking out about a test or assignment and I try to get them to just breathe, relax and remember they’ll get through it.”

With his dedication to serve to make his community better through hard work, Rubio will leave his mark on both the peers he learns with and his fellow student veterans.  For Rubio, knowing he made a difference in the lives of those around him will certainly make his time at Syracuse University even more worthwhile and memorable.

Story by Charlie Poag ’21, a student in the Newhouse School of Public Communications