Actor, producer, singer and activist Wilmer Valderrama (“That ’70s Show,” “NCIS”) will kick off the 20th season of the University Lectures series on Tuesday, Sept. 22, at 7:30 p.m. [The event date has been changed to Wednesday, Sept. 23.]

Valderrama will take part in a virtual conversation via Zoom with David Barbier Jr. ’23, an international relations major in the Maxwell School and a television, radio and film major in the Newhouse School. Barbier is also a Posse Foundation Scholar and a participant in the Renée Crown University Honors Program. Audience members will be able to submit questions for consideration as part of the experience, time permitting. 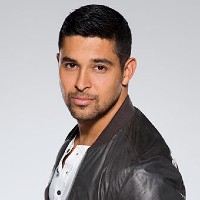 All individuals wishing to virtually attend the lecture must register. You will then be sent a confirmation email with your personal link to access the virtual interview.

Valderrama has amassed an extensive acting résumé in film and television that solidified him in Hollywood as a sought-after leading man. He is most recognized for his portrayal of the character Fez on Fox’s Emmy-nominated series “That ’70s Show” (1998-2006), a role that garnered him numerous Teen Choice Awards. In 2016, he joined the cast of the hit CBS drama “NCIS” (then in its 14th season) as NCIS Special Agent Nick Torres.

Behind the camera, Valderrama created and produced the MTV series “YO MOMMA,” also serving as its host. His production company, WV Entertainment, has multiple television and film projects in development.

In his community, Valderrama serves on the board of Voto Latino and is the spokesperson for the Congressional Hispanic Caucus Institute’s Ready 2 Lead program, which works to educate and empower Latino youth. Valderrama also recently co-founded HARNESS, a group dedicated to connecting communities to inspire action and power change. In 2013, Valderrama was honored with an ALMA Award for Outstanding Social Activism.

Born in Miami, Valderrama moved to Venezuela with his family at age 3 and returned to the United States as a teen. He and his sisters were the first in their family to speak English, and his parents instilled in them the critical importance of education. Fluent in both Spanish and English, Valderrama now resides in Los Angeles.