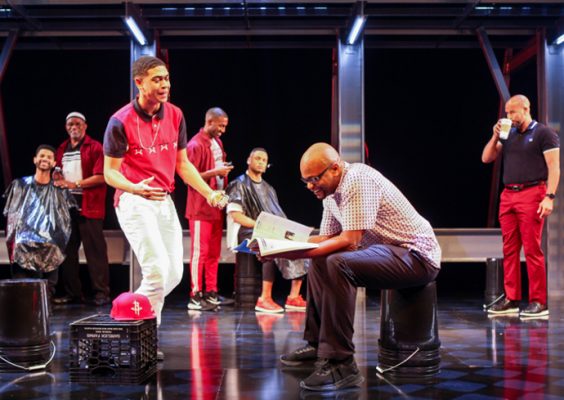 The cast of “Thoughts of a Colored Man” in the world premiere at Syracuse Stage, part of the 2019-20 season.

Syracuse Stage announced today plans for adjustments to the 2020-21 season in order to address the continuing impact of the COVID-19 virus.

Three previously announced plays will be replaced in the six-show season. The Cold Read Festival of New Plays returns with additional enhanced experiences. A series of community-focused performances and conversations will be added and subscribers will be given access to a series of special interviews and behind-the-scenes looks guided by Syracuse Stage artistic leadership.

All plays and events will be available to subscribers and patrons through online access. Currently, any decisions concerning reopening the theater for live, in-person performance are contingent on guidelines and protocols not yet established by professional unions and state and local officials.

New to the season are “Talley’s Folly,” “Miss Bennet: Christmas at Pemberley” and “Twilight: Los Angeles, 1992.” No longer part of the season are “Mary Shelley’s Frankenstein,” “Matilda The Musical” and “Once on this Island.” Stage plans to present these shows in future seasons, possibly as soon as 2021-22.

The new season line-up is as follows: “Talley’s Folly,” “Miss Bennet: Christmas at Pemberley,” “Twilight: Los Angeles, 1992,” “Yoga Play,” “Our Town” and “salt/city/blues.” The season will run from late October 2020 through June 2021. The plays will be available in a video on demand format similar to the theater’s production of “Amadeus” last March. Exact dates for the virtual access of each show will be announced in early October.

An integral part of the reimagined season is a focus on the Central New York community. A new series of free (online) conversations and performances called “Syracuse Stories” will complement plays in the season in an exploration of issues particular to Central New York as well as addressing broader concerns that impact the region.

In announcing the changes to the season, artistic director Robert Hupp explained that offering the plays online is not intended as a simple substitute for the live experience. Rather, by enhancing the plays with additional performances, community conversations and additional related content, the season offers an opportunity to engage with ideas and artists in ways not always available in a more traditional season.

“While we’re saddened by the fact that we can’t create the season we had planned, we are thrilled to announce our ideas for a newly reimagined Syracuse Stage season,” says Hupp. “Especially now, in this time of national reckoning, we need the transformative power of theatre more than ever. We’ll create fully realized virtual work, and with ‘Syracuse Stories’ we’ll put our community front and center through a series of exciting multi-discipline projects.”

The scheduled programming for “Syracuse Stories” is varied. Included are a production of “A Gatherin’ Place” written and performed by members of the Harriet Tubman Troupe, directed by Dr. Juhanna Rogers, and presented in association with the Auburn Public Theater; a series of videoed interviews with local leaders (including Syracuse Mayor Ben Walsh and Syracuse Police Chief Kenton T. Buckner) conducted in partnership with 100 Black Men of Syracuse; and a virtual reunion with Ping Chong and the cast of Stage’s production of “Tales from the Salt City.”

As the season progresses, plays such as “Twilight: Los Angeles, 1992,” “Our Town” and “salt/city/blues” will consider comparable topics through a theatrical lens.

Written and first performed in 1993, “Twilight” is Anna Deveare Smith’s artistic response to the brutal beating of Rodney King and the unrest that unfolded in South Central following the acquittal of four Los Angeles police officers charged in his assault. Using more than 300 interviews, Smith wove a mosaic of four dozen characters into a stunning and insightful work of documentary theater. Steve H. Broadnax III (“Thoughts of a Colored Man”) returns to Syracuse Stage to direct.

The universal perspective offered in Thornton Wilder’s classic “Our Town” resonates deeply today as a reminder of life’s fragility and wonder. Wilder calls out to cherish every unimportant moment we’re together and wonders if any human beings ever realize life while they live it. With deceptive simplicity, Wilder speaks to today with distinct clarity and poetic grace. Hupp directs a play he counts as one of his favorites.

In “salt/city/blues,” playwright and Stage’s associate artistic director Kyle Bass sets a domestic drama against the backdrop of a fictional Syracuse grappling with the impact of a highway development project that has long divided the city and destroyed a once flourishing neighborhood. Stage’s former artistic director Tazewell Thompson, who directed Bass’ “Possessing Harriet,” returns to direct this moving, funny, poignant and fresh, contemporary new play.

Broadening the range of the season and providing some theatrical counterpoint with romance and comedy are “Talley’s Folly,” “Miss Bennet: Christmas at Pemberley” and “Yoga Play.”

Lanford Wilson won a Pulitzer Prize in 1980 for “Talley’s Folly,” a warm tale of unlikely romance between Sally, a thirtysomething woman from the Bible Belt, and Matt, a St. Louis accountant ten years her senior and in love for the first time. Playwright and actor Kate Hamill (“Pride and Prejudice”) and real-life husband Jason O’Connell (Salieri in “Amadeus”) return to Syracuse Stage to star in this intimate valentine of a play.

Fans of Jane Austen will delight in “Miss Bennet: Christmas at Pemberley,” a tribute and sequel to Austen’s great “Pride and Prejudice” that places bookish Bennet sister Mary front and center and quite possibly falling in love. Holiday cheer, romance and England’s first Christmas tree (maybe?) come wrapped in this celebratory production by Lauren Gunderson and Margot Melcon, directed by Hupp and co-produced with the Syracuse University Department of Drama.

The pursuit of authenticity and the perfect lavender-scented yoga pants makes for a bit of comic mayhem in Dipika Guha’s “Yoga Play.” As the new CEO of Jojomon—makers of high-end athletic wear—struggles to contain a public relations disaster, she pins her hopes on convincing a revered and reclusive yogi to serve as the company’s spokesperson. Unfortunately for her, but wonderfully for audiences, he turns out to be not quite as she had expected. Melissa Crespo (“Native Gardens”) returns as director.

“We’ve been at full employment throughout this pandemic pause so we have capacity to create fully realized productions and bring them directly into patrons’ homes,” said Hupp.

Two planned residencies focused on developing new work are scheduled to go forward. In the fall, actor and writer Stephan Wolfert will perform his adaptation of “Macbeth” and develop a new piece, “The Head of Richard” based on “Richard III.” Wolfert appeared as Mrs. Darcy in last season’s “Pride and Prejudice.” He is best known for his one-man show “Cry Havoc,” which draws on his personal experience in the military and as a veteran contending with post-traumatic stress. He is also the creator of DE-CRUIT®–a program to reintegrate military veterans using Shakespeare, psychology and classical actor training.

In the spring, Los Angeles based writer, director and producer Mark Valdez arrives with his production of “Exiled in America,” based on the book “Exiled in America: Life on the Margins in a Residential Motel” by sociologist Christopher P. Dum. Originating at Mixed Blood Theatre in St. Paul, Minnesota, “Exiled in America” is a multi-year, multi-city project that aims to impact housing policy utilizing performance, cultural organizing and creative community development strategies. In addition to Syracuse Stage, the production will travel to theaters in Washington, D.C., and Los Angeles.

Subscribers will be invited to take a deep dive into the season with “Engage with Stage,” a series of special conversations, interviews and behind the scenes looks hosted by Hupp and Bass. Each “Engage with Stage” segment offers insight into specific productions while providing perspective on the season as a whole. Subscriptions are $184 and on sale now at www.syracusestage.org and through the Box Office at 315.443.3275. Single tickets for “Talley’s Folly” will be available beginning Oct. 12.