Share
College of Visual and Performing ArtsSetnor School of Music 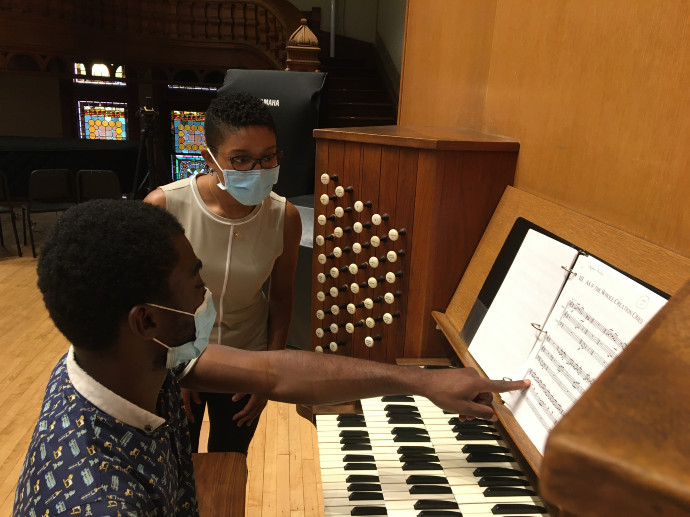 Performer and current organ graduate student Augustine Sobeng talks with sound recording technology major and “Composing for the Organ” research assistant Brianna Cofield ’22 at the Holtkamp Organ in Setnor Auditorium at one of the recording sessions.

On Saturday, Sept. 12, the Rose, Jules R. and Stanford S. Setnor School of Music in the College of Visual and Performing Arts will host “Composing for the Organ,” a series of webinars and a virtual concert that aims to foster awareness of and appreciation for contemporary organ music.

The events, which are free and open to the public, are geared toward composers at any career stage and experience level who wish to learn more about writing for the organ and organists who are interested in the compositional process. Additional details can be found on the event’s Facebook page.

“Composing for the Organ” was created and organized by Setnor faculty members Anne Laver, assistant professor of organ, and Natalie Draper, assistant professor of composition and theory. They originally planned the event as a one-day mini-festival with panels, a reading of new works, and a live concert at St. Paul’s Episcopal Church in Syracuse. After the coronavirus outbreak, the organizers had to reimagine the event and the way in which the composers and performers would share their creative work. They decided to offer a webinar and virtual concert, and St. Paul’s allowed them to rehearse and record the performances. They titled it “Reimaginings: A Virtual Concert of New Music for Organ.”

Draper wrote a piece—her first for organ—that Laver will be performing on the virtual concert. The other performers are current organ graduate student Augustine Sobeng and organ alumni Alexander Meszler ’13 and Jonathan Embry ’14, who will be premiering a work of his own. View the entire performance program.

Draper and Laver also interviewed several prominent composers about their experiences composing for the organ; these interviews are posted on YouTube.

“Our hope is that this program and the associated composing for the organ webinars and interview project will encourage more composers to write new music for the organ,” says Laver in her recorded introduction to the concert. “We want to ensure a dynamic future for the organ, and to do that, we need composers interested in engaging with the instrument—composers who are interested in reimagining the possibilities for the organ.”