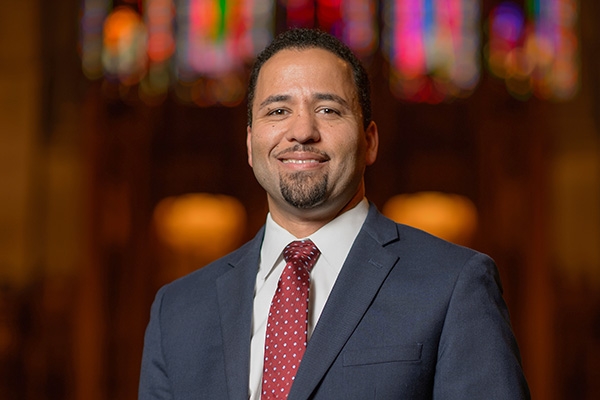 The Rev. Luke A. Powery

The Rev. Luke A. Powery, dean of Duke University Chapel, is the next guest for “Matters that Matter: A Conversation Series from Hendricks Chapel.”

Powery will join Hendricks Chapel Dean Brian Konkol for a virtual conversation on Wednesday, Sept. 9, at 7 p.m. ET. They will discuss bridging faith and learning.

Powery is the first African American dean of Duke Chapel. He is also an associate professor of homiletics at Duke Divinity School. His teaching and research interests are located at the intersection of preaching, worship, pneumatology and culture, particularly expressions of the African diaspora. He is the author of “Spirit Speech: Lament and Celebration in Preaching,” “Dem Dry Bones: Preaching, Death, and Hope,” “Rise Up, Shepherd! Advent Reflections on the Spirituals” and “Were You There? Lenten Reflections on the Spirituals.” He has co-authored an introductory textbook on preaching, “Ways of the Word: Learning to Preach for Your Time and Place.” He is also a general editor of the nine-volume lectionary commentary series for preaching and worship titled “Connections: A Lectionary Commentary for Preaching and Worship.”

Powery was ordained by the Progressive National Baptist Convention and has served in an ecumenical capacity in churches throughout Switzerland, Canada and the United States. He is a member of the Academy of Homiletics, for which he has served as secretary; the American Academy of Religion; and the Society for the Study of Black Religion. Powery served as a member of the executive lectionary team for The African American Lectionary and is the recipient of numerous scholastic fellowships and awards. In 2008, the African American Pulpit named him one of twenty outstanding black ministers under the age of forty who are helping shape the future direction of the church. More recently, in 2014, he was inducted into the Martin Luther King Jr. Collegium of Scholars at Morehouse College for his ethical and spiritual leadership in the academy, church and broader society.

Prior to his appointment at Duke, he served as the Perry and Georgia Engle Assistant Professor of Homiletics at Princeton Theological Seminary. He received a bachelor of arts in music with a concentration in vocal performance from Stanford University, a master of divinity from Princeton Theological Seminary and a doctoral degree in theology from Emmanuel College at the University of Toronto.

This will be the 13th installment of “Matters that Matter: A Conversation Series from Hendricks Chapel,” a virtual series hosted by Hendricks Chapel that brings local and national thought leaders together in conversation to discuss critical matters facing society. Learn more at hendricks.syr.edu.