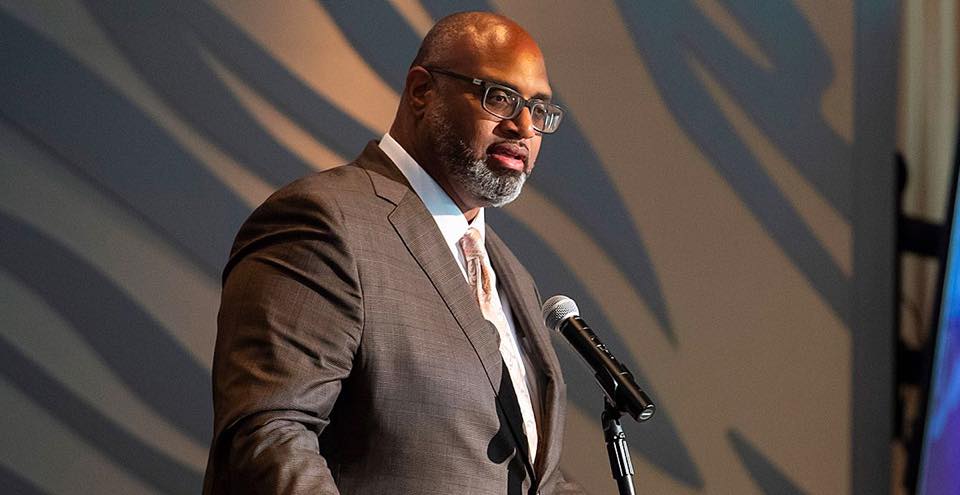 The sudden death of former Syracuse University administrator and philanthropist Kenneth Miles has brought shock and sadness to many who recall his extraordinary service to student-athletes, and especially students of color, during his tenure here.

Miles joined the Syracuse University staff in 1997 as director of academic support for football. A few years later, he became the assistant dean of student services for the School of Information Studies and then executive director of admissions and diversity enrollment management. In 2006, he was named associate athletics director for student support services.

“Kenny exuded positivity and an affirming tone at all times,” recalls Keith A. Alford, the University’s chief diversity and inclusion officer. “He sought to uplift, and we all benefited from his humanitarian spirit. I am deeply grateful that our paths crossed.  His loss is extremely hard.”

Miles passed away on Aug. 15, shy of his 50th birthday. His passing was first announced by the University of Michigan’s athletics department, for which he served as executive senior associate athletic director, in charge of the academic success program. Prior to joining Michigan in October 2019, Miles spent 11 years at Louisiana State University (LSU) as assistant vice chancellor and executive director of the academic center for student-athletes.

At Syracuse, he helped the football team achieve a 100 percent graduation rate. Miles coordinated all academic support services and monitored the academic progress of student athletes. He also assisted student-athletes with career development and employment searches. Under his leadership, the football program earned the American Football Coaches Association (AFCA) Achievement Award in 1998, 1999, 2000 and 2001. The 1999 citation recognized Syracuse for the highest graduation rate among Division I-A programs in the country.

“College athletics and higher education lost a fellow athlete, educator, advocate and friend,” says Tommy J. Powell, assistant provost for student-athlete academic development. “Ken dedicated his professional life to providing support and guidance to thousands of student-athletes. His larger than life personality, booming voice and compassionate spirit will be missed, but we find comfort in knowing his legacy and positive impact on so many people will live on.”

Miles was dedicated to providing all students with the necessary skills for success, helping them become good citizens and catalysts for change. According to Barry L. Wells, former senior vice president and dean of student affairs, Miles’ authenticity stood out: “He was a beautiful spirit. He had a big heart and voice and a great intellect. He always sought as much knowledge, wisdom and advice that I was willing to share with him. He did so for himself  but also to help other young people that he mentored or interacted with. He combined with his love of life an unlimited energy and a commitment to excellence.”

In 2006, Miles created the Kenneth O. Miles Scholarship at Syracuse University through the Our Time Has Come Scholarship initiative to help African American, Latino and Native American students cover the cost of their education. In a Syracuse University magazine profile of Miles that year, titled “A Man for Others,” he is quoted as saying: “You have to be part of the change you want to see happen. I feel blessed to have come in contact with several folks who have had the ability to make change. They inspire me. I hope my legacy is that I leave a place better than I found it.”

“I, along with countless others, know that to be the case,” says Wells. “The life Kenneth led will long continue to influence and inspire those of us that knew him best. He was a man of high standards, integrity and great enthusiasm for life and whatever he was doing. ”

Miles attended the University of Virginia on a football scholarship and helped the Cavaliers win a share of the ACC Championship in 1989. He earned a bachelor’s degree in studio art and a master’s degree in social foundations of education while at Virginia, and began his career there as an academic and life skills coordinator before heading to Syracuse, where he earned another master’s degree in education.

According to Wells, Miles was also an extraordinary family man: “He loved to be with his family, and he was a devoted father to his daughter, Alexandra.” In his obituary, his love for family, friends and students is highlighted: “His legacy will be the hundreds of athletes and mentees he has helped throughout his exemplary career. His bright light, big laugh and kindness will live on through his mother and baby girl, of whom being her Daddy was his favorite role.”