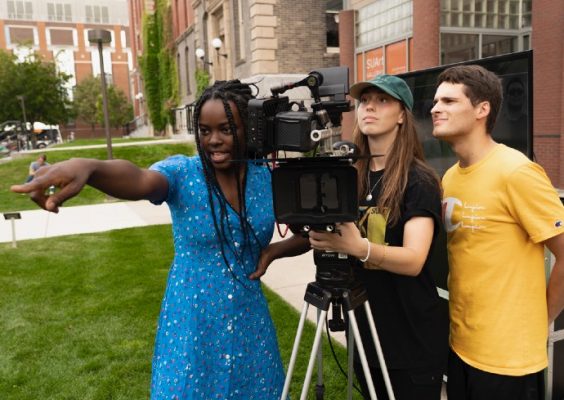 The Hollywood Reporter has ranked Syracuse University No. 16 on its 2020 list of Top 25 American Film Schools. The University moved up two spots from 2019, when it was ranked No. 18. This is the eighth consecutive year the University’s film programs have been included on the list.

The University offers bachelor of fine arts (B.F.A.) and master of fine arts (M.F.A.) degrees in film through the College of Visual and Performing Arts (VPA), as well as bachelor of science (B.S.) and master of arts (M.A.) degrees in television, radio and film through the Newhouse School. The B.F.A./M.F.A. programs focus on independent filmmaking, providing hands-on education on the film production process from development to post-production (scriptwriting, budgeting, pre-production and storyboarding, cinematography, directing, sound design and post-production, including 2D and 3D animation), while the B.S./M.A. programs allow students to customize their program of study according to their career interests, focusing on areas like screenwriting, scripted series, documentary, sports, music, media innovation and others. All of the film study options emphasize visual storytelling.

VPA recently launched a new B.F.A. film curriculum that allows students to have a hands-on filmmaking experience the moment they arrive at the University. The program also added Essay Film, Film and Sci-Fi and Script Analysis courses. A new Film History Survey course studies and explores films, filmmakers, and the politics and historical frameworks of various film movements from the 1960s to the present; this class takes an anti-sexist, anti-racist and international approach to cinema history.