Lt. Col. Tim Kimbrough’s United States Air Force career has brought him to 10 different stations of duty. Each time, he and his family have moved an average of 4,500 miles. We sat down with Lt. Col. Kimbrough to hear more about his journey and thank him for his service, which has ultimately culminated at Syracuse University. 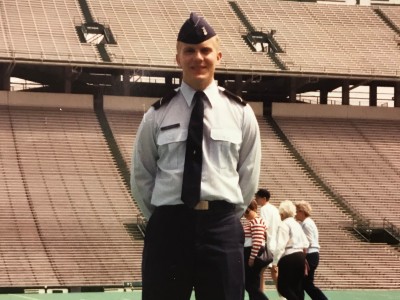 Tim Kimbrough as a ROTC cadet at Michigan State University.

Born in Macon, Georgia, Tim Kimbrough was destined for a life on the move. He grew up the son of a railroad man and moved every two to four years.

“I was a railroad brat. My dad worked his way from entry level to executive,” he says. “I was comfortable with our moving cadence and eventually mimicked it myself in the Air Force.”

Kimbrough spent his formidable years in the Southeast before starting his junior year of high school in Detroit, Michigan—in the state he finally identified as home.

After graduation, Kimbrough stayed up north for college at Michigan State University while his family returned south. There, two life-altering events occurred: he met his now-wife, Kristie, and he joined the school’s Air Force ROTC detachment.

“I didn’t have an immediate family tie to the military. But my maternal grandfather, who died even before my mother was born, served in the Air Force. He died in a crash off New Guinea during the second world war. While not exactly my inspiration for joining, I did feel the pull,” he says.

That pull, coupled with a drive towards service and purpose, kept Kimbrough motivated through four years of ROTC before graduating and commissioning in 1995. 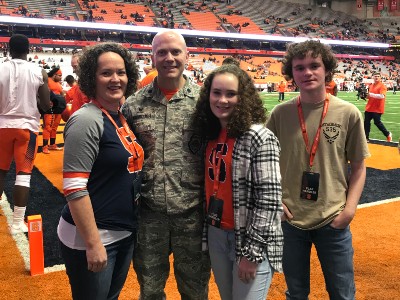 The Kimbrough Family in the Dome.

“During my senior year, I was excited to learn I was assigned to become a pilot. I went through the flight screening program and started training but was medically disqualified,” Kimbrough says. “It was something minor; I actually don’t even remember what it was. That was initially a shock, but within two months I was reassigned as an intelligence officer.”

Kimbrough went to Texas for intelligence training at Goodfellow Air Force Base. After a year, he and Kristie married during a month-long break. Three days later, the couple moved to England on Kimbrough’s first assignment.

For three years, the Kimbroughs lived, worked and traveled through Europe. He collected  and analyzed military intelligence, reported it and recommended courses of action. As his career advanced, he moved into counterintelligence.

After England, Kimbrough shifted to support flying missions. The interest brought them to Mountain Home Air Force Base in Idaho. The family lived on the base, learned to rock climb, skied in Sun Valley and traveled with friends to Montana, all while Kimbrough worked on F-15, F-16 and B-1 bomber-supported missions.

“Kristie wasn’t thrilled when we were assigned to Idaho. We got off the plane in Boise and she cried during the hour drive to Mountain Home,” Kimbrough says. “Three years later, we cried because as we left a place and people we came to love. The people you meet in the military make every move worth it.”

Kimbrough’s time in Idaho was initially slated to end in January 2002. Then came the events of Sept. 11, 2001. Kimbrough’s unit quickly deployed to Kuwait for three months that October.

“After Kuwait, I spent January through June 2002 at the United States Air Force Weapons School, studying the world’s most advanced training in weapons and tactics employment of combat and mobility air forces,” he says. 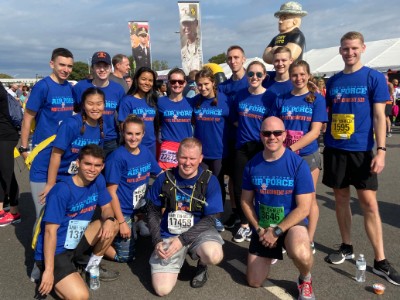 Lt. Col. Kimbrough and Syracuse University cadets at a run.

The training propelled Kimbrough’s career again, this time to Northern Japan for another three years. It was there that he and Kristie welcomed their son. The next 12 years saw the Kimbroughs move to Nellis Air Force Base in Nevada, where their daughter was born; McChord Air Force Base in Washington state; back to England, to the same base where he started his career; and finally a four-year stint in Hawaii.

By then Kimbrough had served over 20 years. Not quite ready to retire but looking to be closer to family, he started to explore ROTC positions on the mainland.

“I didn’t have a particular connection to Syracuse, but it reminded me of Michigan,” he says. “And after living all over the world, living nine hours from Kristie’s parents and only one time zone away from my parents seemed close.”

Kimbrough has served four years as the head of the Air Force ROTC unit at Syracuse University. The detachment’s cadet participation has grown 35 percent under his leadership.

“There have been so many highlights at Syracuse. Commissioning is always a special event. I love to gather the families before at the Remembrance Wall and talk about the family we have built together,” he says. “The 2020 commissioning was less formal because of COVID-19; we had a smaller class, so I actually visited each cadet and commissioned them in person, with masks and socially distant, of course. Our whole unit, friends and family watched (the ceremony) on Zoom.”

“I started my experience at Syracuse with this year’s cadets as freshmen; to see them through their full college career and into their Air Force assignment was so meaningful, especially as I move on, too,” Kimbrough says.