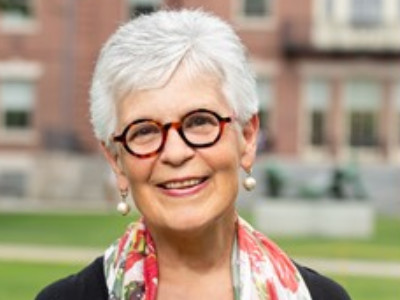 The Rev. Janet Cooper Nelson, Chaplain of Brown University, will join Hendricks Chapel Dean Brian Konkol for a virtual conversation today at 7 p.m. ET. Cooper Nelson is the first woman to be appointed as chaplain of an Ivy League institution. She and Dean Konkol will discuss “health, hope and our struggle to be well.”

Wednesday’s conversation can be accessed with Facebook Live on Hendricks Chapel’s Facebook page or Zoom webinar. Pre-registration is not required, and the conversation is free and available to all.

Cooper Nelson is also a faculty member at Brown University and widely respected as a lead authority on religious and spiritual life in higher education. She was appointed at Brown in 1990 after similar roles at Vassar College, Mount Holyoke College and The Church of Christ at Dartmouth College. Ordained in 1980 by the United Church of Christ, her work examines interfaith collaboration, advocacy, religious identity and literacy, education, ethics and grief.

This will be the tenth installment of “Matters that Matter: A Conversation Series from Hendricks Chapel,” a virtual series hosted by Hendricks Chapel, which brings local and national thought leaders together in conversation to discuss critical matters facing society. Learn more at hendricks.syr.edu.