Mother Earth’s Pandemic: The Doctrine Of Discovery will offer panel discussions and perspectives from indigenous peoples in a virtual conference from 6 to 9 p.m. on August 6, 13 and 20. Panel discussions will feature activists like Tink Tinker and a keynote by Turtle Clan Faithkeeper and Syracuse University’s first native graduate, Oren Lyons. Panel discussions will be followed by small group discussions. Registration is open on this website. It is open to the public and participants can attend one virtual conference for $10, two for $30 or all three for $50. 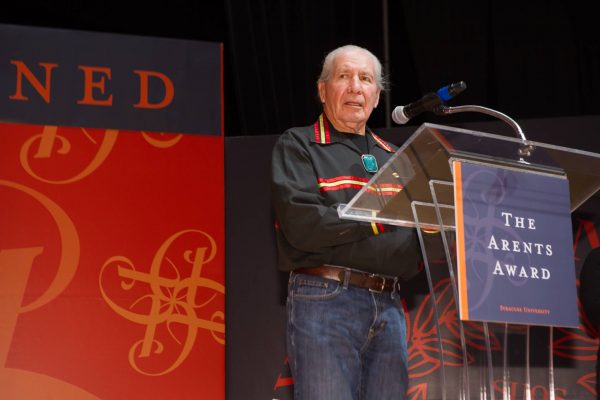 The conference will examine how the doctrine of discovery is influencing public discourse even today. “It is a unifying piece of our shared history that explains quite a lot about why we are in the kind of very turbulent moments that we are right now,” says Philip Arnold, associate professor and chair of the religion department at Syracuse University’s College of Arts and Sciences. “It is something that connects many of the issues around legal issues, the environment, even religion.”

Arnold says that many of the issues facing societies in the United States and around the world can be traced back to the Doctrine of Discovery, under which explorers were encouraged to travel to remote places to acquire possessions, wealth and converts to the Catholic religion. “The age of discovery is justified in religious terms, by this idea of what we now call the Doctrine of Discovery.”

Later, in 1823, the doctrine was enshrined into federal law in the Supreme court decision of Johnson v. McIntosh. “This notion of the Doctrine of Discovery is what undergirds all land acquisition in the United States, and this becomes a principle that is spread around the world,” says Arnold. The influence of the doctrine is felt today. It is echoed in the recent Supreme Court ruling in favor of the Muscogee (Creek) people in Oklahoma that is forcing the federal government to honor 19th-century treaties. The doctrine is also responsible for the racial injustice protested by Black Lives Matter, and controversies surrounding Columbus statues, says Arnold. “Natural superiority of one religion or one worldview over and against another is the basis of this Doctrine of Discovery.” The three panels will cover aspects of law, race and religion.

The virtual conference is a collaboration with the Onondaga Nation and sponsored by the Indigenous Values Initiative, American Indian Law Alliance and supported by a Collaboration for Unprecedented Success and Excellence grant that’s offered through Syracuse University’s Office of Research. Arnold says the mission of the conference is to illustrate the connections between the pandemic, environmental destruction, the Doctrine of Discovery and a way forward. “Syracuse University could be at the leading edge of this scholarship, given where we are and our legacy.”