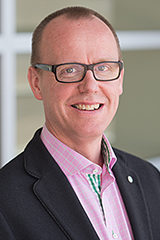 The Martin J. Whitman School of Management recognizes Johan Wiklund, Al Berg Chair and professor of entrepreneurship, for his role in significantly improving the SAGE Journal Entrepreneurship Theory and Practice’s (ETP) 2019 Impact Factor published by Clarivate (part of the Journal Citation Reports 2020). As editor-in-chief, Wiklund has helped the ETP’s impact factor jump from 6.193 to 10.75.

In other words, according to the statistic most commonly used for comparing the impact of journals, ETP ranks among the top three.

The big improvement is also visible from other metrics, including the five-year Impact Factor, Impact Factor without self-citation and Scopus CiteScore. While there are various metrics of impact, the Impact Factor remains a common indicator of quality.

“Credit goes to Professor Wiklund’s relentless drive to help ETP become better respected among researchers in entrepreneurship and management. He has been implementing thoughtful editorial changes, closely monitoring the quality of submissions and reviews, and acting as a vocal ambassador of ETP and its impact on entrepreneurship and beyond,” says Michel Benaroch, associate dean for research and Ph.D. programs. “The good news is the strong upward trajectory of ETR among its peer journals.”

Over time, ETP has strengthened its position relative to other journals. Wilkund adds, “For the past 10 years, USC Greif Center for Entrepreneurial Studies has been awarding the most impactful entrepreneurship paper published six years prior in the leading management and entrepreneurship journals (AMJ, AMR, ASQ, ETP, JBV, MS, OS, SEJ, SMJ) based on citations during the subsequent five years. As the only journal, ETP has won the award three times.”

When it comes to research impact, Wiklund has a distinguished pedigree. In 2017 he was granted the inaugural RMIT Fulbright Distinguished Chair in Entrepreneurship and Innovation. He traveled to RMIT University in Melbourne, Australia, to extend his research on mental health and entrepreneurship. Wiklund’s work also contributed to a top 10 ranking the Whitman School received for overall research impact in entrepreneurship. Most recently, he was recognized with a 10-year Impact Award by SAGE Publishing for receiving the most citations over the span of a decade.