Syracuse Stage has received a grant from the Andrew W. Mellon Foundation in support of “Exiled in America,” an original work rooted in an examination of housing insecurity and homelessness in the United States.

The project, originated by Los Angeles based artist and activist Mark Valdez, is inspired by the 2016 book “Exiled in America: Life on the Margins in a Residential Motel” by Christopher P. Dum. Valdez will partner with arts organizations and community members in four cities to develop and perform “Exiled in America.” In addition to Syracuse Stage, the organizations are the Mixed Blood Theatre in Minneapolis, Minnesota; Building Bridges Across the River in Washington, D.C.; and the Japanese American Cultural and Community Center in Los Angeles, California. Syracuse Stage will administer the $220,000 grant.

“It’s an honor to receive significant support from the Mellon Foundation in support of Mark’s work, and on behalf of our producing partners in Minneapolis, Los Angeles and Washington, D.C.,” says Syracuse Stage Artistic Director Robert Hupp. “‘Exiled in America’ is an important project for Syracuse Stage as we strive to enhance and expand our community-centered work.”

“Exiled in America” is described as an experiment in art-based problem solving to build cross-sector relationships, foster dialogue, influence housing policies and ultimately enact social change. As such, there are two distinct components of equal importance. The first involves bringing together community stakeholders to investigate the issues in each city. The second is to use the information gathered to create a play to be performed in each participating city. 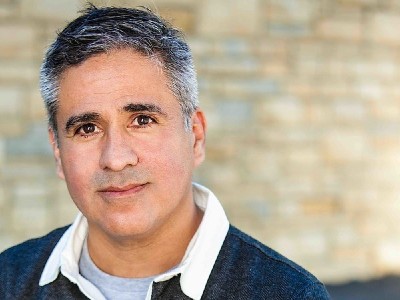 Community workshops in each city will be organized with local partners to bring together relevant stakeholders, including people experiencing housing insecurity, policymakers, commercial developers and community development corporations and advocates.

Valdez’s strategy is to invite representatives from these constituencies to come together to help create the play. Often these groups do not interact with each other, or have grown wary of each other due to mutual perceptions of intractability and self-interest. Once together, the project’s goal is to surface information that will inform the play and to build trust and communication among everyone in the room.

“We have to envision the world we want in order to make it; if we can see it then we can do it,” Valdez says. He added that bringing the stakeholders together and engaging them in the process of creating a play will allow for an examination of current policy cracks and envisioned solutions “within the confines of imagination, outside the burden of ‘reality.’”

Each of the participating communities experiences ongoing problems with housing insecurity and homelessness. Syracuse, for instance, has some of the nation’s highest rates of concentrated and extreme poverty for people who are Black and/or Latinx, and approximately 25 percent of residents move at least once a year, many due to evictions and other forced moves. In Los Angeles, a recent homelessness count revealed a 12 percent increase in L.A. County, even as 27,000 individuals were able to reenter housing. In the Twin Cities, the 2019 homeless count reached a record-high of 11,000—a 10 percent increase since 2015. Similarly, as of January 2019, the District of Columbia had an estimated 6,521 people experiencing homelessness on any given day, as reported by Continuums of Care to the U.S. Department of Housing and Urban Development (HUD).

As a theater artist, Valdez, has spent more than 20 years creating work that centers on social justice themes and issues, often in and with communities across the country. For 10 years he has been the associate artistic director of the Cornerstone Theater Company, a community-based ensemble working in Los Angeles and throughout the country. He says he believes there is a greater role for art to play in civic matters and in the legislative process, and that the tools employed to make art (consensus building, finding common meaning from multiple points of view, envisioning new worlds—and literally building them) can lead to civic impact.

“I’ve had the pleasure to know Mark for many years and have always been impressed by his compassion and clear-sighted focus on how theatre can be an agent of change for communities of all sizes,” Hupp says. “Mark’s work stands at the intersection of art and social policy and I look forward to the opportunities afforded by this exciting project in Syracuse.”

The awarding of this grant represents the first time Syracuse Stage has received support from the Andrew W. Mellon Foundation.

Work on the community based aspect of “Exiled in America” is scheduled to begin in the fall in the four participating cities, with the Syracuse performances slated for early April 2021. While no changes to the schedule have been announced, alterations to the timeline are possible due to the COVID-19 pandemic.