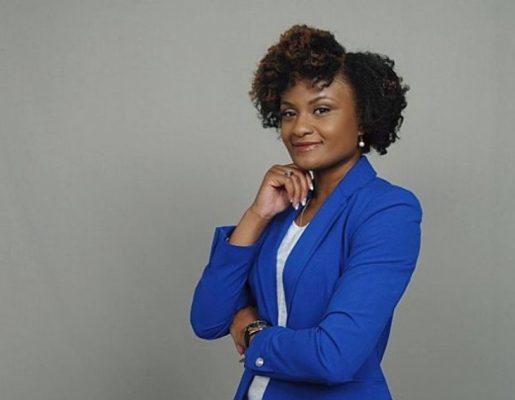 For CBS News digital journalist Brandi Kellam G’11, reaching the end of her master’s degree studies at Newhouse was only the beginning of her career journey.  She wasn’t sure exactly where that journey would lead, and her message to students is, that’s okay.

“It’s okay for students to technically not know which path they care to take when they graduate,” says Kellam, who adds it’s important for students to have confidence and not get caught up in the end game when just starting out.

According to Kellam, “Confidence is a big part of being successful. Sometimes you graduate and you don’t know what you want to do in the industry.  I wasn’t sure if I wanted to be on air or producing.  That’s okay.”

Kellam delivered this message on Friday, July 24, to Newhouse broadcast and digital journalism (BDJ) students in the Washington, D.C., graduate capstone program. Kellam graduated from the program in 2011. Her talents first landed her positions at MSNBC, where she started as an intern and was hired full time. Kellam impressed early on, expressing a desire to come in unpaid on weekends to learn the role of the booking producer who helps to secure guests for newscasts. Her offer, in turn, led to a job offer—her first full-time professional position at MSNBC, all the while continuing to impress.

“I came up with an idea to provide a cheat sheet to one of the anchors I was working with,” Kellam says. “I wasn’t asked to do it but I did, and these notes became so popular that all the other anchors wanted them, too. Everyone was using my notes and that gave me a leg up and I made an impression.”  Kellam’s advice is gold. “If you do more than people ask you to do, that will always open doors.” 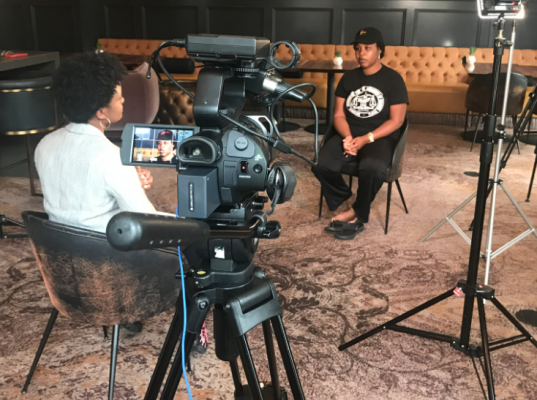 Brandi Kellam G’11 conducts an interview during coverage of the George Floyd murder.

And it did.  Kellam now works as a digital journalist for CBS News, covering some of the most meaningful stories in history, including the pandemic and the aftermath of the murder of George Floyd.

For a young person from Chesapeake, Virginia, who studied sociology and ran track as an undergrad it’s not the path she intended to take. But that’s just the point.

“What (journalism) has always needed is for people willing to stand out in a way that you’re not trying to fit in,” says Kellam. “I never felt I fit the mold of a traditional journalist. Most people I went to school with knew from an early age they wanted this, but I didn’t. I wasn’t shaped by that, and that allowed me to not fit a certain mold. I think that gives me a different perspective,  and that’s what makes journalism great. Different voices in the conversation.”

As Kellam continues down her career path, the next step may be a move away from short-form news, and a move toward long-form, as in documentary production. “The future really is digital, and I’d like to combine my interest in documentary filmmaking and journalism and create my own content in a deeper way than what I’m doing now.”

It’s easy to see that by doing more than what’s expected, Kellam will easily achieve this goal too.

Some additional examples of Brandi Kellam’s reporting include: