Last week, for the sixth year in a row, Syracuse University hosted the esteemed Warrior-Scholar Project (WSP), a no-cost academic boot camp for first-year student veterans. Normally held on campus to allow for a comprehensive campus experience, the program was moved online this year in light of the COVID-19 pandemic. 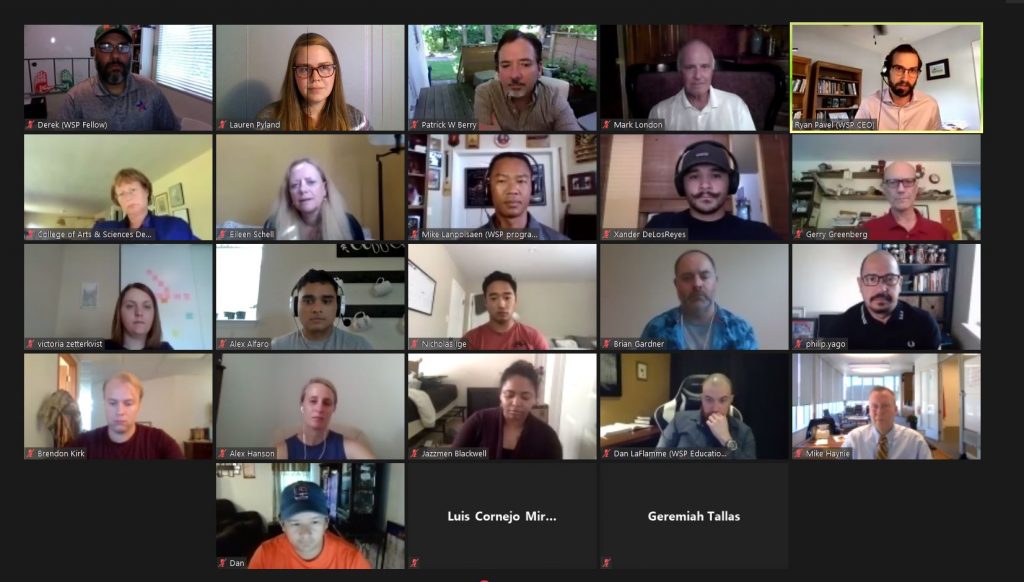 Students in the University’s Warrior-Scholar Project gather for a virtual meet up.

Hosted at 18 select institutions nationwide, the WSP empowers enlisted military veterans by providing them with a skill bridge to enable a successful transition from the battlefield to the classroom, maximizes their education opportunities by making them informed consumers of education, and increases the confidence they will need to successfully complete a rigorous four-year undergraduate program.

“Transitioning from military service to civilian life can be overwhelming even without an additional transition into higher education,” says retired U.S. Army Col. Ron Novack, executive director of the University’s Office of Veteran and Military Affairs (OVMA). “The Warrior-Scholar Project plays a critical role in preparing and equipping these soon-to-be student veterans with the valuable skills and tools needed to move successfully from the ‘battlefield to the classroom.’ Considering the COVID-19 health pandemic and the consequences it has imposed on colleges and universities, this year’s Warrior Scholar Project is especially important in helping student veterans succeed in new, non-traditional, and virtual learning environments. Syracuse University is proud to be entering its sixth year of partnership with WSP and empowering service members as they transition to higher education.”

The project at Syracuse University is a collaborative effort of the OVMA and the College of Arts and Sciences. Syracuse faculty who taught during this year’s program include, among others:

To bolster this year’s online format, the program featured events that included a virtual closing ceremony with comments from Syracuse University Vice Chancellor and Institute for Veterans and Military Families (IVMF) Founder Mike Haynie; as well as a virtual panel with WSP alumni. Current Syracuse University student and U.S. Air Force Airman Shaei Rodriguez was among the selected alumni to contribute his perspective.

WSP launched its first program at Yale University in 2012 with nine participants. Since then, WSP has expanded to serve hundreds of veterans across the country. In addition to Syracuse University, WSP graduates have gone on to enroll at such institutions as Columbia, Cornell, Dartmouth, Georgetown, Harvard, Princeton, Stanford and Yale.