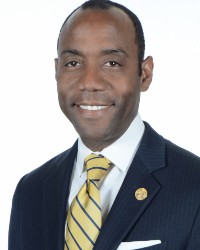 The Rev. Cornell William Brooks of Harvard University, former president and CEO of the National Association for the Advancement of Colored People (NAACP), will join Hendricks Chapel Dean Brian Konkol for a virtual conversation on Thursday, July 23, at 7 p.m. ET. Rev. Brooks and Konkol’s discussion will focus on social change, religious communities, and human rights around the country and world.

This will be the sixth installment of “Matters that Matter: A Conversation Series from Hendricks Chapel,” a virtual series hosted by Hendricks Chapel on Facebook Live that brings local and national thought leaders together in conversation about critical matters facing society. Learn more at hendricks.syr.edu.

Rev. Brooks is a graduate of Yale Law School, a longtime civil rights attorney and a Methodist minister from El Paso, Texas. He led the NAACP from 2014-17. Previously, he was president and CEO of the Newark-based New Jersey Institute for Social Justice. In 2010, New Jersey Gov. Chris Christie selected Brooks to serve on his transition team on the Committee on Homeland Security and Corrections.

Brooks has also served as senior counsel with the Federal Communications Commission; a U.S. Department of Justice trial attorney; executive director of the Fair Housing Council of Greater Washington; and a trial attorney with the Lawyers’ Committee for Civil Rights Under Law.