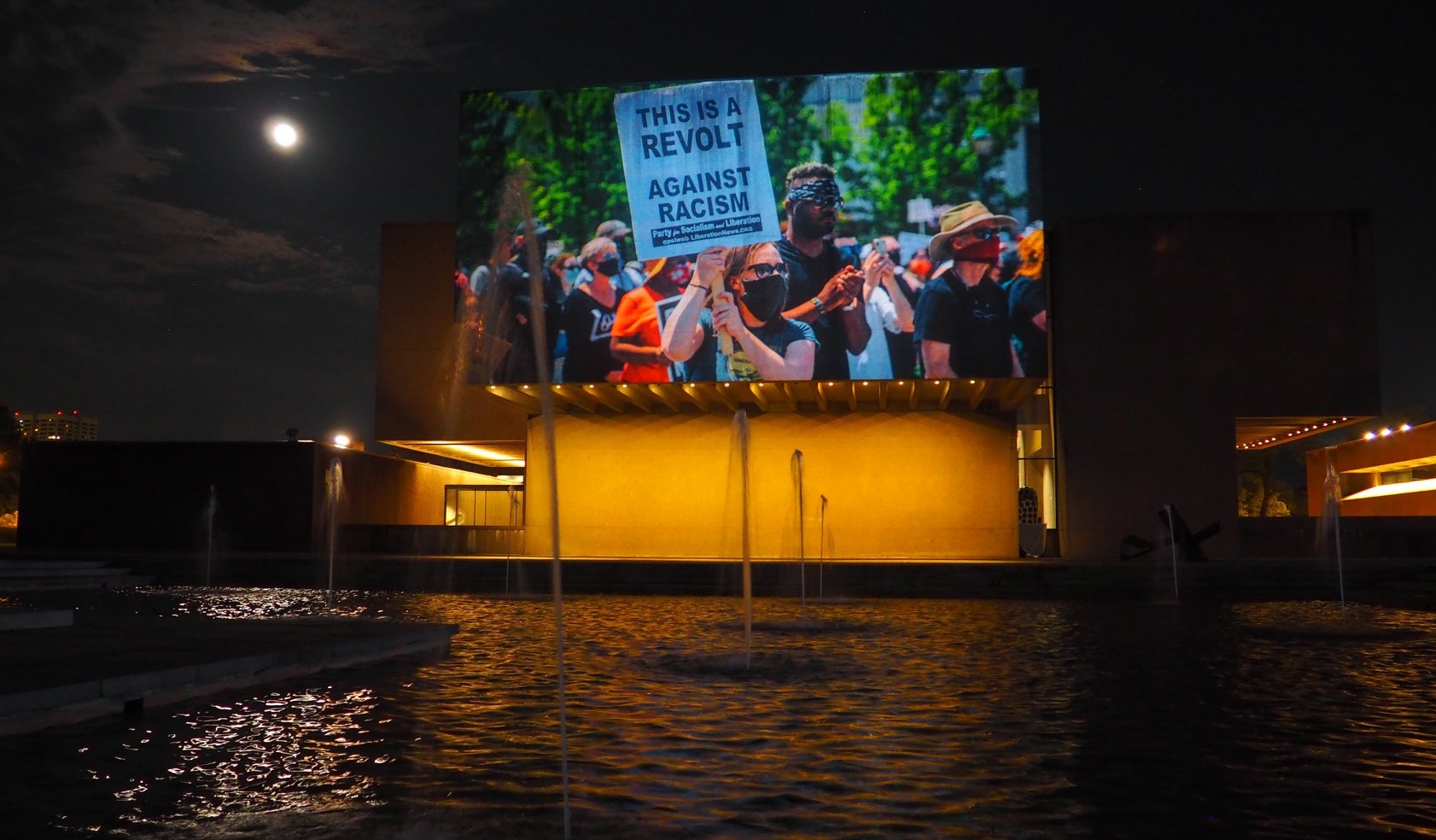 Light Work’s Urban Video Project (UVP) installation “In Solidarity” went dark on July 8 to make way for a long-awaited upgrade of UVP’s projection equipment. The culmination of years of fundraising and planning, the upgrade will make it possible for UVP to continue its mission to present urgent, thought-provoking work by media artists from around the world at the outdoor projection site at the Everson Museum of Art.

With the contributions of Black photographers and photojournalist allies, UVP’s act of solidarity had appeared each night for more than three weeks, offering viewers on the plaza an opportunity to witness the passions, frustrations and determination driving the protest movement in Syracuse.

UVP extends its appreciation to the many photographers and artists who made images of the marches, rallies and actions organized by Last Chance For Change, Raha Syracuse and YouthCuseBLM. The photographs by Cheriyln Beckles, Mylz Blake, Kollina Dacko, Dennis Fernando, Eric Derachio Jackson Jr. and Maranie Staab chronicled the protesters’ unwavering commitment to condemn and root out police violence, systemic racism and state-sanctioned violence.

Those who journeyed to the museum’s plaza provided powerful feedback that reaffirms art as an indomitable tool in challenging injustice and inequity. “We appreciate the work of the photographers covering the movement in Syracuse and the Urban Video Project’s willingness to have a solidarity display,” says Rannette Releford, director of Syracuse’s Citizen Review Board (CRB), which hears complaints about police misconduct. “This was a perfect example of how important this movement is to our community and the choices an organization can make to show support. We appreciate being showcased in the ‘In Solidarity’ installation because accountability and transparency are necessary to improve relations. You cannot have one without the other, and for far too long, neither has been a top priority to the Syracuse Police Department.”

At the launch of the collaborative project, UVP Director Anneka Herre spoke of the location’s importance: “It is not a coincidence that UVP’s  Everson Museum site is proximate to where many of the protests are happening along the downtown law enforcement and legal corridor. This corridor of civic buildings was created through an urban renewal program that displaced a population of Black citizens who are also disproportionately affected by the criminal justice system. It is incumbent upon us to use this site in ways that amplify the voices of those who are doing the difficult work of making change and to add our own voice to that call.”

For those who did not have the opportunity to see the installation in person at the Everson plaza, “In Solidarity” has been added to Light Work’s 2020-21 exhibition calendar. It will be on view in the Hallway Gallery at Light Work in late fall. The show will run concurrently with Matthew Connor’s exhibition in the Kathleen O. Ellis Gallery.

Please note that at this time Light Work is closed temporarily to the public and all scheduled opening receptions and artist talks have been canceled as part of Light Work’s commitment to helping flatten the COVID-19 curve. Light Work exhibitions are available for viewing online.

About the Urban Video Project

Urban Video Project (UVP) is a program of Light Work in partnership with the Everson Museum of Art and Onondaga County. This outdoor architectural projection site offers public presentation of film, video and moving image arts, using cutting-edge technology to bring art of the highest caliber to Syracuse. It is one of the few projects in the United States dedicated to ongoing public projections and adds a new chapter to Central New York’s legacy as a major birthplace of video art.