The Office of Diversity and Inclusion invites the Syracuse University community to attend the upcoming virtual event “In the Moment with Bakari Sellers: Reflections and Strategies for Change,” in which the CNN political analyst, attorney and author will look at the racial inequality, systemic racism, disregard of marginalized identities and killings of Black individuals that have forced America to the cusp of monumental change. 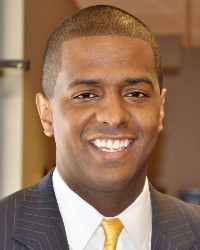 Joined by a University panel, Sellers will also address the historical implications that led to the deaths of George Floyd, Breonna Taylor and so many others, and discuss strategies for action and change.

The event is Friday, June 12, from 3 to 4:30 p.m. on Zoom. It’s free, but registration is required. Live closed captioning will be provided.

“The murder of George Floyd has not only been enraging to see, but as a Black man, I cannot help but think that he could’ve easily been me. He is one out of the many Black men and women whose lives we have lost due to police brutality,” says Marques Palmer ’21. “As a social work major, I am dedicated and committed to studying ways to help people within various communities, enhance their individual and collective well-being. The black community should not have to be burdened with worrying about our constant safety and the ongoing effects of systemic racism, but we do.

“I am looking forward to Bakari Sellers’ virtual conversation with our campus community on Friday, Palmer says. “I am hopeful that with his words and our collective thoughts as a community, we will bring awareness to the ongoing injustices that we as Blacks face on a daily basis, because every Black life matters.”

“The heinous killing of George Floyd is not a singular event. The omnipresent nature of systemic racism has to end,” says Chief Diversity and Inclusion Officer Keith Alford. “No more Black lives, not one, should be lost because of police brutality or any racial atrocities. We will keep pressing forward in making this change a lasting one. That’s why I am looking forward to Bakari Sellers’ visit. He has been a longtime advocate of civil rights. And his words, in this moment, will be welcomed.”

Widely considered a rising star in the Democratic Party, Sellers made history in 2006 when, at just 22 years old, he defeated a 26-year incumbent state representative to become the youngest member of the South Carolina state legislature and the youngest African American elected official in the nation. Sellers served South Carolina’s 90th district until 2014, when he vacated his position to run for lieutenant governor (losing his bid to Republican Henry McMaster, who would go on to become the state’s governor).

Sellers served on Barack Obama’s South Carolina steering committee during the 2008 election and spoke at the 2008 Democratic National Convention.

Sellers is the son of civil rights activist Cleveland Sellers Jr. He attended Morehouse College in Atlanta, earning a bachelor’s degree in African American studies, and went on to earn a juris doctor degree at the University of South Carolina School of Law. He has worked for U.S. Rep. James Clyburn and then-Mayor of Atlanta Shirley Franklin. He is an attorney with the Strom Law Firm, L.L.C., in Columbia, South Carolina.

His book “My Vanishing Country: A Memoir” (Amistad, 2020) was published this past May. Sellers highlights the systemic inadequacies in rural black America, using his hometown, Denmark, South Carolina, as an example. He traces his father’s rise to become a friend of Stokely Carmichael and Martin Luther King Jr., a civil rights hero and a member of the Student Non-Violent Coordinating Committee. And he explores the plight of the South’s dwindling rural, black working class—many of whom can trace their ancestry back for seven generations.