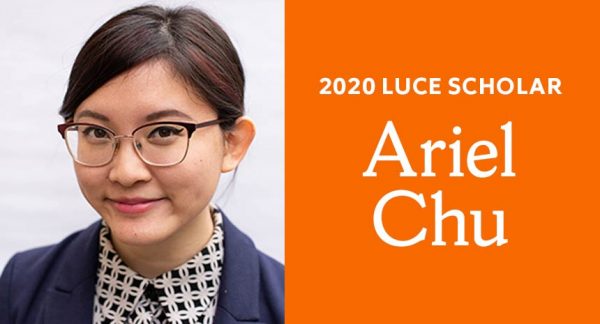 In 1986, Ariel Chu’s parents immigrated from Taiwan to the United States. In Taiwan, her parents were both engaged in their passions—her father was a well-known programmer and her mother a beloved Chinese literature teacher. The political and economic uncertainty in Taiwan, and their desire to give their future children a better life, influenced them to make the move to California. Growing up, Chu was aware that her parents sacrificed their passions so that she and her younger brother would have the opportunity to pursue theirs.

This summer, Chu will travel to Taiwan, where she will live for a year as a 2020 Luce Scholar and pursue fiction writing and literary study. Chu is the second Luce Scholar in Syracuse University’s history. The Luce Scholars Program is a nationally competitive fellowship program launched by the Henry Luce Foundation in 1974 to enhance the understanding of Asia among future leaders in American society. The program provides stipends, language training and individualized professional placement in Asia for 15-18 Luce Scholars each year.

Chu is one of 18 Luce Scholars chosen from a pool of 162 candidates nominated by 73 colleges and universities across the United States. Syracuse University is allowed to nominate up to three candidates for each year’s Luce Scholars competition. Nomination is coordinated through the Center for Fellowship and Scholarship Advising (CFSA). Chu worked with the CFSA in preparing her application.

“Ariel will be an extraordinary Luce Scholar. She has clear goals to position herself as a cultural liaison between Asian and U.S. artists and writers, and to build communities and networks within and between these literary cultures,” says CFSA Director Jolynn Parker. “The training and insights she’ll gain through her Luce placement will be critical to her development as a leader in literary community building.”

Chu has finished her coursework for a master’s degree in creative writing in the College of Arts and Sciences and is now completing her fiction thesis. She was an editor in chief of Salt Hill Journal and a 2019 recipient of the Paul and Daisy Soros Fellowship for New Americans. She is planning to complete a Ph.D. and is working on her first novel.

“I’ve spent much of my life working with English texts in a ‘western’ literary context, so I leapt at the opportunity to broaden my reading and engage with Taiwanese literary communities,” she says. “My goal for my Luce year is to achieve greater fluency in Chinese, which would allow me to begin reading, translating and writing in my parents’ mother tongue.”

Going forward, she aims to weave translation work into her current artistic practice, collaborate with Taiwanese and Chinese writers, and study queer Asian diasporic writing as part of her Ph.D. coursework. “I also hope that reading and writing in Chinese will have a significant impact on my writing process,” she says. “I’m looking forward to discovering the exact nature of that impact!”

The start to Chu’s Luce year has changed because of border restrictions caused by the COVID-19 pandemic. The Luce Scholars Program—in partnership with the Asia Foundation—has enrolled her in a virtual eight-week intensive language course in National Taiwan University’s International Chinese Language Program that she will begin in mid-June. Chu will then travel to Taipei in mid-August to begin her professional placement. Her goal is to work closely with feminist and queer literary communities. “In whatever way is possible, I’d like to be of service to presses, bookstores or other organizations amplifying marginalized voices,” she says.

Chu says her parents are thrilled that she is moving to Taiwan, though they acknowledge that the country has changed significantly since they lived there. “My mother, who used to teach Chinese literature, reminded me that an entire generation of Taiwanese art has flourished during the 30 years they’ve lived in the U.S. Even she doesn’t know what new literary trends, preoccupations and styles have emerged in the meantime,” Chu says. “Given this information, I’m excited to explore contemporary Taiwanese literature firsthand, then share what I’ve learned with my family.”

Chu says she has often associated “Taiwan” with her parents’ nostalgia, so she is eager to explore her heritage on her own terms.

“I want to feel a greater personal connection with Taiwan and integrate what I learn into my creative practice. I’m especially excited to delve into Taiwanese queer literary communities, which have been the nexus of vibrant artistic and political change over the decades,” she says. “Growing up, I sometimes felt that ‘queerness’ and ‘Taiwanese-ness’ were mutually exclusive, so it heartens me to know that I can participate in communities that embrace those parts of me simultaneously.”

The Luce Scholars program is open to U.S. citizens or permanent residents who are graduating seniors, recent graduates or young professionals under the age of 30. The program is open to all disciplines; its intent is to provide an immersion experience in Asia for outstanding young Americans who would otherwise not have the opportunity to know Asia intimately. Current students or alumni interested in an application should contact the CFSA at cfsa@syr.edu.