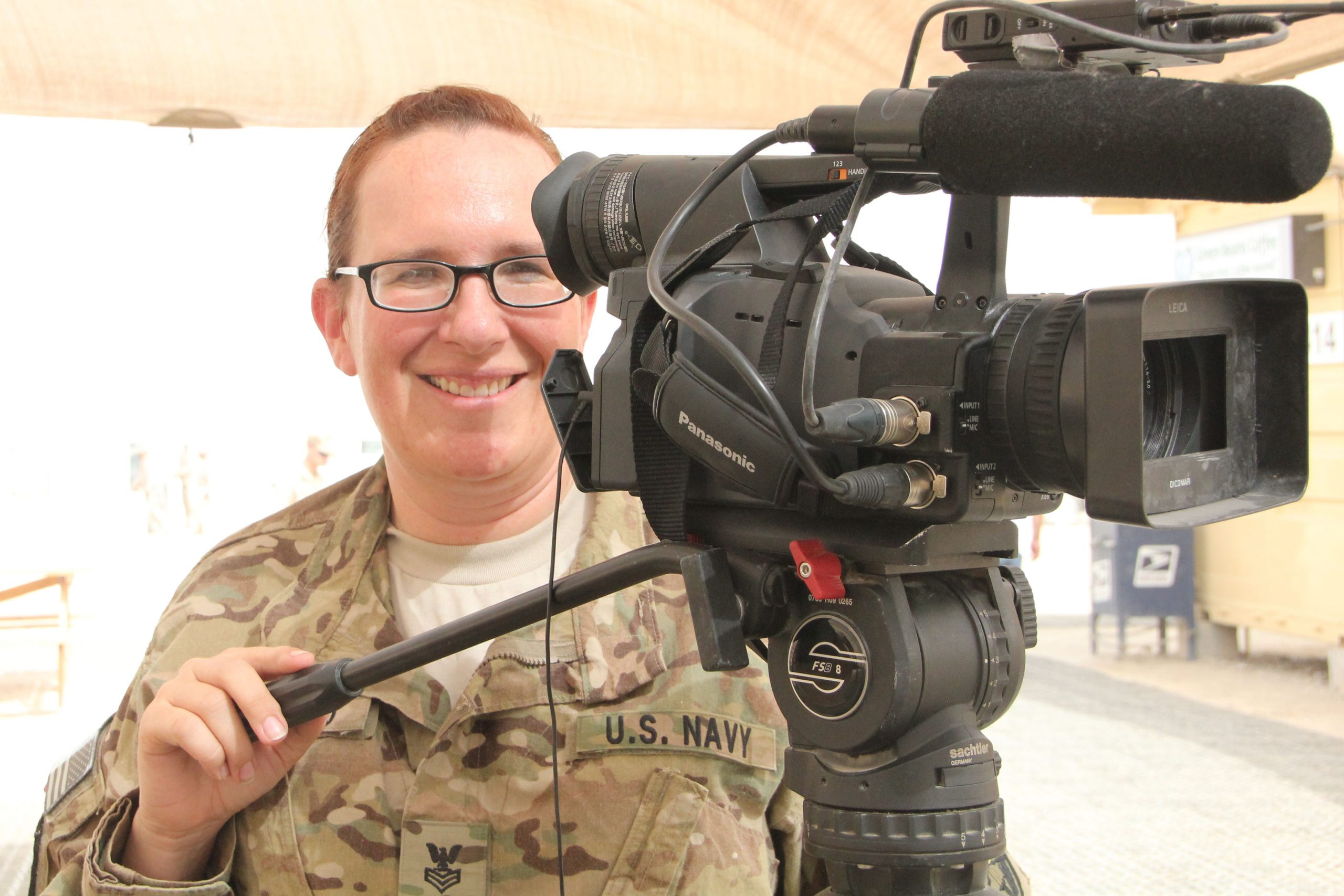 With her graduation this month, Peggy Trujillo will have both a 20-year journalism career and her Syracuse University diploma.

As the child of a U.S. Air Force master sergeant, Trujillo spent her childhood moving from place to place for her father’s service career.

“Originally, I’m from everywhere,” she says.

Trujillo intended to go to college. But when various financial aid issues got in her way, she visited a military recruiter.

Knowing she was comfortable with military life and interested in journalism, Trujillo enlisted in the U.S. Navy in 1996 and after bootcamp attended its Defense Information School in Fort Meade, Maryland. There, she studied public affairs, photography and journalism as part of her military training.

From school, she went overseas to Bahrain.

“I loved it there. I was there just 10 days before I put in a request to stay for the year,” she says. “It was 1997, not all ships had television, so we recorded news and sports and sent the programming to ships in the area, essentially acting as a duplication facility for the U.S. Navy and Marine Corps News supporting broadcast command.”

Trujillo quickly realized she had found her niche at the intersection of journalism and military service. She continued in Bahrain for two years, then went to Japan working aboard the USS Fort McHenry doing photography, video and writing.

“We were always underway, and I loved seeing so much of the Pacific,” she says. “I saw Hong Kong, Guam, Korea, Thailand—all in service to my country.”

She then served in Sicily at the U.S. broadcast station there before being called back to the United States to serve at the Naval Criminal Investigative Service (NCIS) headquarters in D.C., where she spent four years working on the Navy Security Forces magazine.

In 2008, Trujillo was assigned as the leading petty officer aboard the USS Theodore Roosevelt in Norfolk, Virginia. The ship deployed to South Africa and made history as the first carrier to visit the country in more than six decades.

All the while, Trujillo maintained a home and family in Maryland. In 2011, she returned home, as all Navy media services were brought under one umbrella. In 2014, she began teaching journalism classes at the Naval Media Center at Fort Meade—the same school where she began her military career. After three years of instructing there, Trujillo retired, 20 years to the day from when she had enlisted.

“After retirement, I knew I was going to go back to school. Of all the positions I held during my time in uniform, teaching was my favorite. I knew I wanted to be a college professor. And to do that, I needed my master’s.”

“The Navy Chief of Information Office sponsors a program that sends military members to Syracuse University for military photojournalism and military visual journalism through the Newhouse School,” she says. “Throughout my career, I had had sailors attend the program and come back and work for me. I was always so impressed with them, so I decided I, too, wanted to get a degree from Syracuse and Newhouse.”

Trujillo applied and was accepted to the Newhouse School’s online master’s in communications program. In January 2020, she was one of more than 20 students to attend Student Veterans of America’s National Conference in Los Angeles. “NatCon blew my mind. The Office of Veteran and Military Affairs sent more students than any other school and paid for everything. I would have never gotten that opportunity at another institution.”

This semester, Trujillo completed her degree in communications with a focus in public relations, having finished her entire course load online.

“There is no school that supports veterans more than Syracuse,” Trujillo says. “It’s not just one office, it’s the whole school mentality. I am beyond happy with my decision.”