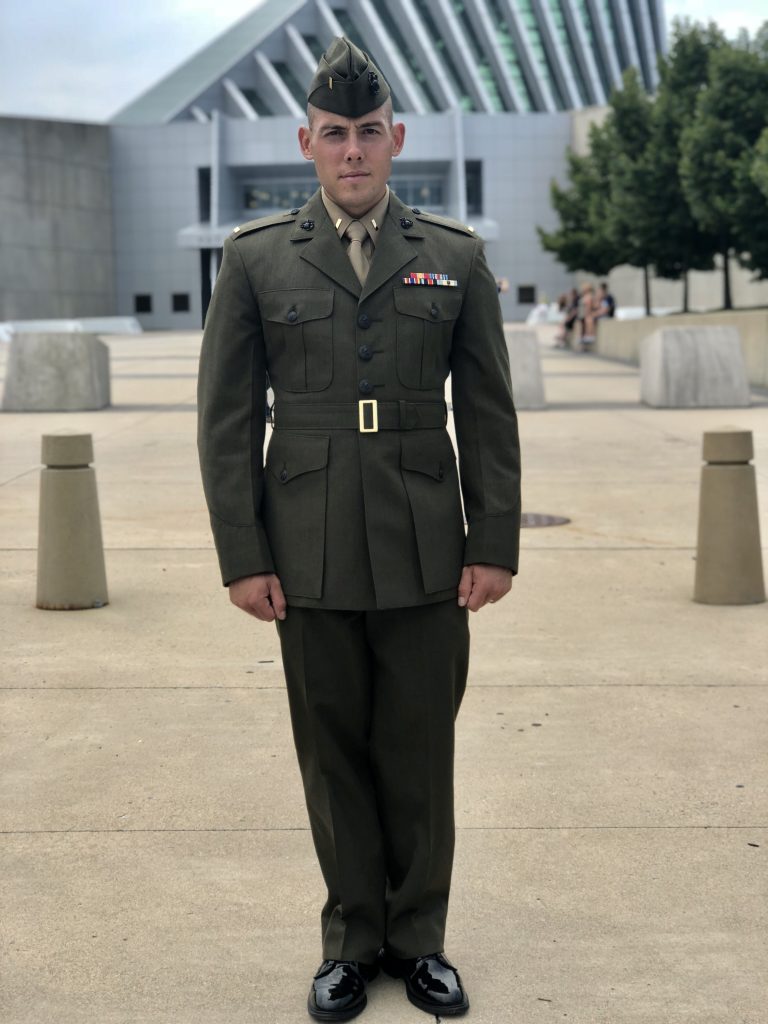 Ariel Blanco’s interest in the military was piqued while he was in high school in Miami, impressed by both the demeanor of the recruiters that visited the school and the opportunity military life could provide.

“I grew up in a working-class family,” he says. “When the military recruiters visited my school, I loved the crisp look of their uniforms and was taken with how articulately they spoke about the academic opportunities and career prospects that came along with serving in the military.”

Blanco enlisted in the U.S. Navy Reserve in 2008, at age 17, with the support of his parents, both of whom are Cuban immigrants. He completed recruit training in Chicago and then went to “A” School and military police training in San Antonio, Texas, before deciding to work on his undergraduate degree at the University of Mississippi.

“Military police training got me interested in criminal justice and political science. I went to Ole Miss from 2010-13 while still serving as a reservist. I would drill one weekend a month and complete two weeks of training each year. I completed duty assignments in San Diego and Florida, and even served as security detail for the U.S. Navy Blue Angels.”

Following graduation, Blanco served on several short-term active duty assignments, including one in South Korea, as well as a yearlong deployment to the Middle East in 2016. While deployed, he began thinking seriously about law school.

“When I was overseas, I began thinking about civilian life post-deployment. As an undergrad, I always thought about becoming a lawyer,” he says. “While it’s hard to find time when you’re overseas working 12-13-hour days in the blistering heat, I made time and began studying for the LSAT after work.”

Close to 10 years after he first joined, Ariel returned to U.S. soil and worked to transition back to a part-military, part-civilian life while preparing to take the LSAT.

“When a deployment is over, it’s bittersweet. Although I missed my wife and family, I got used to life over there. There’s purpose in accomplishing the mission. I knew that getting back into the regular groove would take some time.”

“When I was looking at schools, Syracuse University’s commitment to veterans and service members stood out to me,” Blanco says. “Syracuse University went so far as to have a Syracuse Law graduate and Navy judge advocate contact me during the application process, just to make sure I had everything I needed. This demonstrated that Syracuse was truly committed to supporting the military. I was sold!”

He enrolled in the College of Law never having set foot in Upstate New York.

In 2018, after his first year of law school, Blanco switched branches and attended Marine Corps Officer Candidate School, where he commissioned as an officer in the U.S. Marine Corps.

He graduates this month with his juris doctorate and will serve on active duty as a Marine Corps judge advocate. His experience in the same crisp uniform he first admired as a high schooler will mesh with his newly minted legal degree from Syracuse University.

“I have come to love the military lifestyle,” Blanco says. “My invaluable experience at Syracuse University set me up to serve in the role I spent over 10 years working towards.”