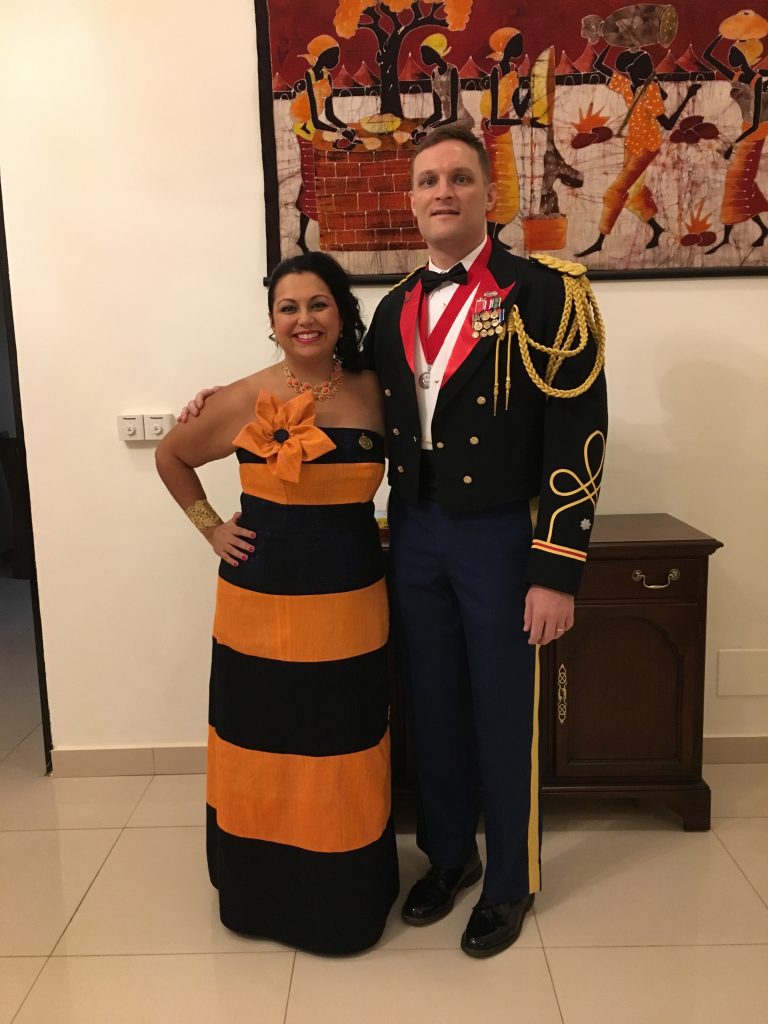 Dominique Visser and her husband, Andy

U.S. Army spouse Dominique Visser was born and grew up in Sydney, Australia. She was working as an international trade advisor/market development specialist for the Australian federal government when she was told of her now-husband, Andy, by mutual friends.

“Good friends of mine told me about a U.S. Army soldier who was deployed in Iraq. They were convinced we would hit it off. So, we actually started writing each other while he was deployed in 2004.”

By spring 2005, when she visited her friends in Fort Drum, New York, Andy had returned from Iraq and turned up for dinner.

“We met in person, went on a few dates, and it was clear this was serious,” Visser recalls. “I went back to Australia and maintained a long-distance relationship. I visited Andy in January 2006, and we became engaged. By the time we got married, we had probably spent a collective eight weeks face to face.”

The two married in New York in July 2006. One month to the day after their wedding, Andy deployed again to Iraq, leaving his new wife in a new country amidst a new lifestyle.

“Military culture is so different. But I was lucky I have friends who showed me the ropes of military life,” she says.

The snow arrived in Fort Drum that year in October. It was Visser’s first experience living in the cold.

“I had to establish myself in the U.S. without my husband’s help,” she says. “I had to get a U.S. driver’s license and learn to drive on the other side of the road—in the snow! That experience was somewhat of a microcosm of being a military spouse. You have to be able to be independent and just get on with it.”

Andy returned home in July 2007, and the couple soon moved to California so he could complete his master’s degree at Stanford University. From there, the Vissers moved to Paris, then Hawaii, West Point, Virginia, Burkina Faso and now Belgium.

Through all the moves, and the births of their three children (now aged 11, 10 and 7), Dominique maintained a desire to advance her skills, knowledge and career.

She decided to pursue her online MBA and chose Syracuse University, given her familiarity with the University. She felt it would give her a formal academic framework on which to hang her international experience.

“I always felt a tie to Syracuse, being the closest hub to Fort Drum. SU was actually the only school I applied to, and they were so helpful,” she says. “My undergraduate degree is a B.A. in languages from Western Sydney University, and Syracuse University was understanding and accommodating about international accreditations. I had friends whose kids went to Syracuse, and I always heard good things. So when I got in, I was delighted.”

Doing her coursework online while managing a military family, Visser has endured her share of obstacles. En route back to Burkina Faso during a layover in Paris, everything was stolen—her laptop with her coursework, passports, certificates—but her professors were flexible and only concerned with her safety.

In Africa, two terrorist attacks hit their area, and the country was declared a no-travel zone. “I told my professors of the dangers, the challenges of heat, dust and electricity/connectivity,” she says. “They never pitied me or made me feel like they were making special accommodations. Rather, everyone was understanding and supportive in a difficult situation.”

Visser also found support from other students and her academic advisors.

“So many people I studied with took the time to understand the challenges of military life. When I had especially spotty internet service during the hot season in Africa, or during our move from Burkina Faso to Belgium, other military-connected students in the classes knew what I was experiencing. Being able to talk to others who get it and have jumped through those hoops, coupled with the support from the University—it set me and others like me up for success.”

For Visser and her family, her Syracuse degree is a family endeavor and a family investment.

“I have been so impressed with the program. This program really stretches and pushes you,” she says. “You have to sign on ready to work—it is not a walk in the park. My husband afforded me use of his GI Bill for this, and as he tells the kids when he takes them out for the day when I need to study, or when we all sit down to do our homework together, this effort is for all of us.”

The Visser family planned to attend Syracuse University’s Commencement. “My kids have seen the effort this has taken,” Dominique says. “They have seen me heading into class on weekends. They know the time difference with New York means I am up late at night for class and sometimes don’t finish until 2.30 a.m. So, we think it’s important for our kids to see the end of the effort, for them to see me walk the stage in my cap and gown.”

The University’s commencement has been postponed to the fall due to the COVID-19 pandemic, and the Vissers still hope to attend the rescheduled ceremony.

After taking a break from embassy work to finish her degree, Visser is excited to explore new opportunities with her MBA. Ideally, she would like to find a remote or transferable job to help with career continuity or even go back to her passion, international trade advisory/export advisory.

“My Syracuse education really has given me a sense of confidence that I can take on a career amidst this crazy life,” Visser says. “I have enjoyed every minute of this program, even the most challenging. To other military spouses, all I can say is: give it a try, invest in yourself—it’s worth it in the end.”