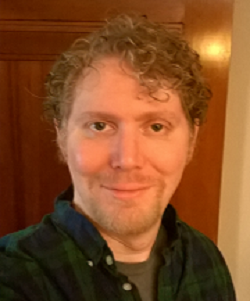 David Maynard, a graduate student in the Department of Writing Studies, Rhetoric and Composition in the College of Arts and Sciences (A&S), was selected as the 2020 winner of the prestigious Mary Hatch Marshall Essay Award.

On May 7, A&S and the Syracuse University Library Associates will award the 16th annual Mary Hatch Marshall Award for the best essay written by a graduate student in the humanities via a Zoom meeting at 2 p.m. At the event, Maynard will present his paper. Anyone interested in attending can register in advance by emailing libevents@syr.edu by May 6 at noon.

Maynard, this year’s recipient, will receive a $1,000 prize for his essay titled “The Science Is Not Enough: Evaluating Climate Change Appeals in Light of the Conservative Christian Apocalyptic Frame.” His essay was selected from those submitted by A&S graduate students currently enrolled in African-American studies; English; art and music histories; languages, literatures and linguistics; philosophy; religion; writing studies, rhetoric, and composition; and women’s and gender studies.

A timely topic, Maynard’s paper employs apocalyptic rhetoric as an analytical frame for making sense of the divisiveness that characterizes climate change discourse in the United States. Maynard sketches out tentative opportunities for consensus on this critical issue, especially when it comes to bridging the ideological and rhetorical gaps between secular climate change activists and conservative Christian stakeholders. By evaluating Greta Thunberg’s climate change appeals against the backdrop of the Conservative Christian apocalyptic frame, Maynard suggests that climate change activists must more closely attend to the ideological frames of those individuals and communities whose attitudes and behaviors they seek to change.

Professor Mary Hatch Marshall was a founding member of the Library Associates and holds a distinguished place in the college’s history. In 1952, she became the Jesse Truesdell Peck Professor of English Literature—the first woman to be appointed a full professor in the college— after having joined the faculty four years earlier. Library Associates established the annual Mary Hatch Marshall Award to honor and help perpetuate her scholarly standards and the generous spirit that characterized her inspirational teaching career, which lasted through her retirement in 1993. Members of Library Associates, Marshall’s friends and family, the Gladys Krieble Delmas Foundation and the Central New York Community Foundation all contributed to the endowment, established in 2004, that funds the award.

Library Associates are a group of SU Libraries supporters who help to raise funds for the Libraries’ special collections, rare books and manuscripts. Those wishing to make a gift to the Mary Hatch Marshall Award Endowment in remembrance of or in honor of Mary Hatch Marshall, can contact Ron Thiele, assistant dean for advancement for the Libraries, at rlthiele@syr.edu or 315.560.9419.