Donald Kennedy, an internationally recognized neurophysiologist who headed both the U.S. Food and Drug Administration (FDA) and Stanford University, and launched his academic teaching career at Syracuse University, died April 21 at age 88 of COVID-19 in Redwood City, California. 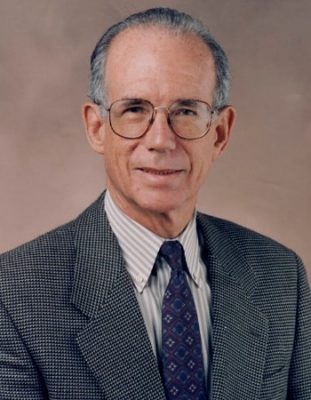 Kennedy joined the Syracuse University faculty in 1956. His research included the patterns of neural action in crayfish, demonstrating some of the connection principles among nerve cells that impose the sequences underlying a behavioral event. Kennedy showed that some single neurons, which he termed “command” neurons, could produce a complex, fixed-action pattern of locomotory behavior.

He left Syracuse for Stanford in 1960 and was granted tenure in 1962, pursuing diverse research interests in comparative marine biology, public policy, nutrition and recombinant DNA technology. In 1967, he was appointed chairman of the Department of Biology in Stanford’s School of Humanities and Sciences.

For a little more than two years, beginning in April 1977, Kennedy served as commissioner of the FDA, during the period of the landmark Drug Regulation Reform Act of 1978.

Upon his return to Stanford in 1979, Kennedy was provost for one year before becoming the university’s eighth president in August 1980. Among his many accomplishments in his 12 years in office, Kennedy led the institution through the recovery from a devastating natural disaster: the 1989 Loma Prieta Earthquake, which caused $160 million in damage to the Stanford campus.

After stepping down from his top leadership role in 1992, Kennedy returned to the Stanford faculty and was named president emeritus and the Bing Professor of Environmental Science and Policy.

In its tribute article announcing his passing, the Stanford News Service recalled Kennedy’s favorite send-off message for graduates, quoting former Illinois governor and presidential candidate Adlai Stevenson: “Your days are short here; this is the last of your springs. And now in the serenity and quiet of this lovely place, touch the depths of truth, feel the hem of Heaven. You will go away with old, good friends. And don’t forget when you leave why you came.”