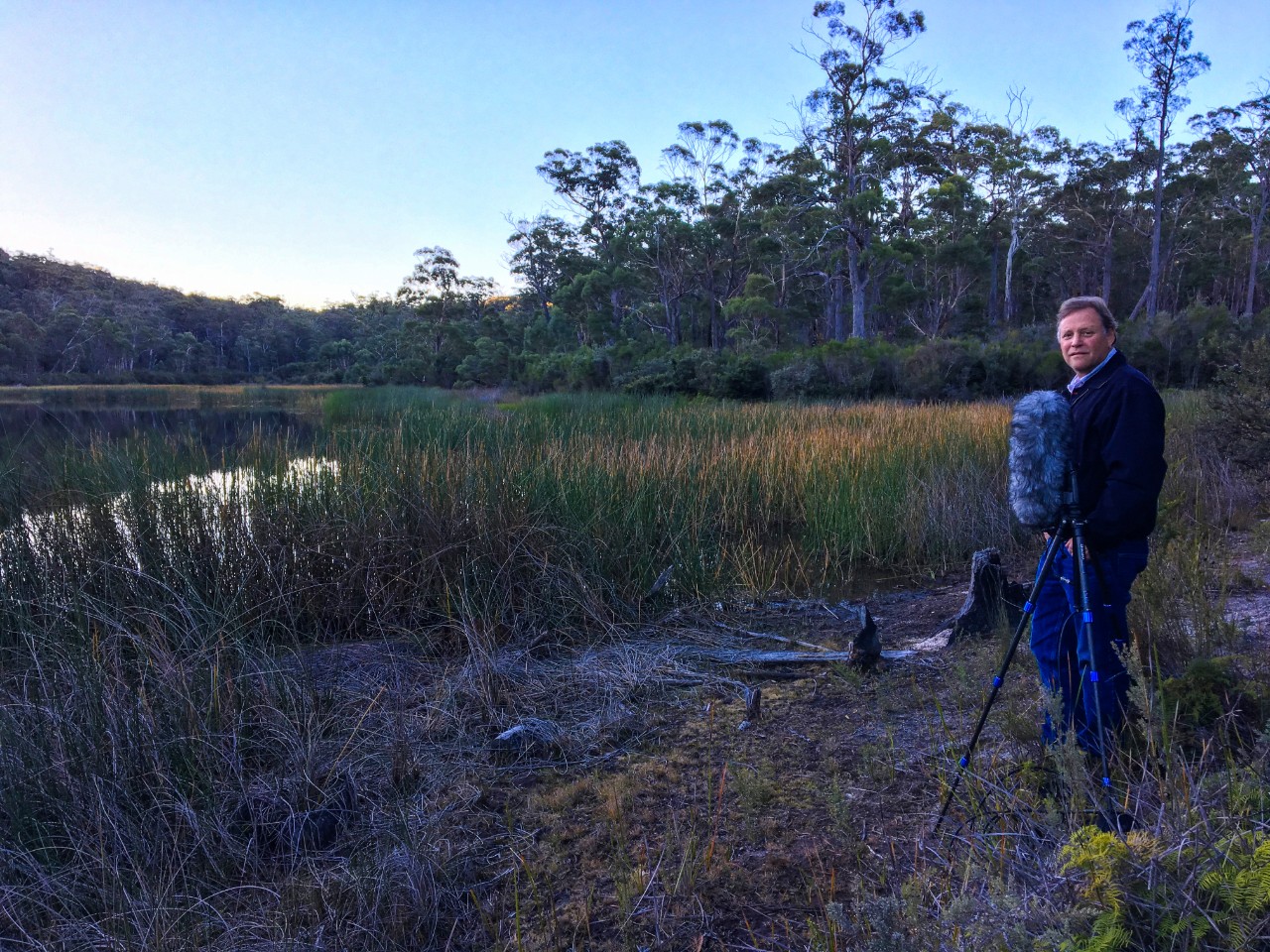 Doug Quin recording an evening chorus at a swamp on Fetchels Creek in Tasmania.

Sound designer, composer and Newhouse faculty member Doug Quin is among the artists whose work is featured on the new iOS app Soundscapes. The app invites users to reconnect with nature through a collection of soundscapes captured in locations all over the world. Quin is an associate professor of television, radio and film.

Soundscapes features a new, original and documented soundscape each week. Quin’s work for the app includes recordings from near and far: A very large flock of Canada geese takes off, circles and lands in successive waves from the ice of Green Lake; a rare recording of critically endangered crow honeyeaters from New Caledonia; and a lone, young male elephant seal vocalizing with its echo pealing off a glacier terminus in Antarctica take listeners on sonic journeys further afield.

“The Soundscapes app is a thoughtfully curated collection of recordings and compositions,” says Quin. “They are a way for people to discover some of the planet’s sonic wonders—from a quiet and contemplative moment listening to dawn chorus in the Adirondacks to some of nature’s unusual and curious sounds. Faced with such a catastrophic loss of habitat and wildlife, an important reason for the app is to connect people with the voices of others with whom we share the planet. Ultimately, it is our own survival that is at stake. Our goal is to move and provide people with a visceral experience of the beauty and diversity of what exists around us and what we stand to lose.”

Quin says he’ll donate proceeds he earns from the app to the Tasmanian Land Conservancy, a nonprofit that buys and manages land in Tasmania in order to protect its sites and ecosystems.

Last year, Quin spent eight months as a visiting fellow at the Conservatorium of Music at the University of Tasmania (UTAS), where he taught classes, made presentations, led community outreach initiatives, and recorded sounds across the state.

Quin was recently appointed as an adjunct associate professor at UTAS’ School of Creative Arts and Media. Though he will remain in his position at the Newhouse School, the appointment allows him to continue his research and collaboration, access UTAS resources, and mentor doctoral and graduate students.

He recently co-authored a paper titled “Vaughan Williams and the Soundscapes of ‘Scott of the Antarctic,’” an analysis of the soundtrack to the 1948 film, with UTAS colleagues Carolyn Philpott and Elizabeth Leane. The article will be published in The Music Quarterly.

Quin has spent the past three decades capturing soundscapes all over the world. His recordings of endangered and disappearing habitats represent one of the most unique and extensive collections anywhere.

Quin has worked on films such as Werner Herzog’s Academy Award-nominated “Encounters at the End of the World,” “Jurassic Park III” and “Lord of the Rings: The Two Towers,” as well as documentaries for television and radio.

Soundscapes is available for download from the App Store. Android and web versions are under development.