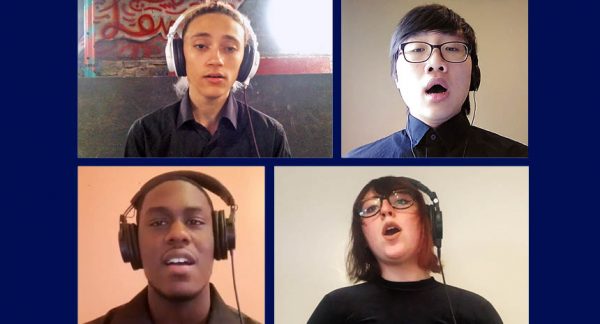 When the Spring 2020 semester began, choirs and ensembles around the Syracuse University campus started working on the pieces they planned to perform during spring concerts. It takes weeks and weeks of preparation and practice to get the concerts—and the performers—to the point where they are ready for an audience.

The coronavirus pandemic has not only forced the cancellation of concerts but has also taken away precious time from students—time meant to be engaged in music and the college experience.

The Hendricks Chapel Choir and Setnor Sonority, two of the University’s premier vocal ensembles, are not allowing the pandemic to stifle their creativity this semester. Thanks to some quick thinking on the part of Peppie Calvar, associate professor of applied music and performance and assistant director of choral activities in the College of Visual and Performing Arts’ (VPA) Setnor School of Music and the director of both choirs, and the video editing expertise of his graduate teaching assistant, Joel Touranjoe, the choirs will each produce a virtual performance.

Setnor Sonority, a new 32-member, Setnor-based choir for tenors and basses, is working on a non-traditional world premiere of Jonathan Reid’s “Crossing the Bar.” The piece won Setnor’s 2019 Gregg Smith Choral Composition Competition and was slated for a 2020 premiere.

The Hendricks Chapel Choir, a 44-member Universitywide choir, is working on a virtual presentation of “You Shall Know the Truth” by Craig Phillips. The piece was commissioned for the 75th anniversary of Hendricks Chapel in 2005 and was planned to be part of the University sesquicentennial celebrations. 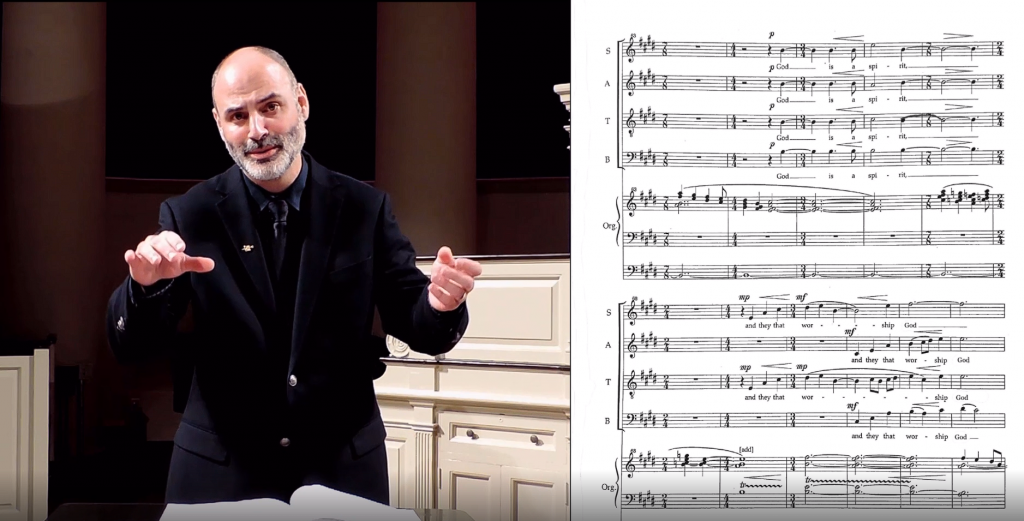 Peppie Calvar, associate professor of applied music and performance in the Setnor School and director of the Hendricks Chapel Choir and Setnor Sonority

How does a choir perform when its members are physically apart? Hendricks Chapel Choir members are spread out across the United States, and Sonority members are spread out across the globe—with one member in Moscow. In the case of these choirs, the foresight to lay the foundations of the projects before spring break, the miracle of technology, and the enthusiasm of the participants are all combining to make the concerts happen.

In early March, when it became obvious the pandemic was going to cause major disruption to normal life, Calvar sprang into action. With the help of Touranjoe; Hannah Comia, teaching assistant and accompanist for Setnor Sonority; and Anne Laver, University organist, assistant professor in the Setnor School and accompanist for the Hendricks Chapel Choir, foundational footage with conducting and accompaniment was recorded to be used in virtual products for both ensembles.

Students recorded their individual performances twice in their homes and sent the videos in. Calvar, Touranjoe, Laver and Comia reviewed first submissions, and Touranjoe combined the final submissions into the larger collaborative pieces. In addition to performances, both choirs will have the opportunity to participate in a live virtual interview with the composer of the piece it is performing prior to the unveiling of the final projects.

Calvar says the project allows him to maintain connectivity with his students and is sending a strong message about unity. “Joel has emerged as an ace in the hole with this project—I never would have considered it before,” he says. Calvar now sees endless future possibilities for projects that can engage with alumni and with audiences around the world.

“I am really excited to be doing this,” Touranjoe says. “It is one of the best ways to keep us connected.”

Choir members say the projects are keeping them connected to Syracuse and to their music during a particularly challenging time.

Katharine Stasior, a senior in the College of Engineering and Computer Science from Albany, New York, is a soprano and has performed with the Hendricks Chapel Choir since the fall semester of her first year. She is also president of the student HCC E-board. When she found out about classes being moved online for the rest of the semester, one of her first thoughts was of the Hendricks Chapel Choir. 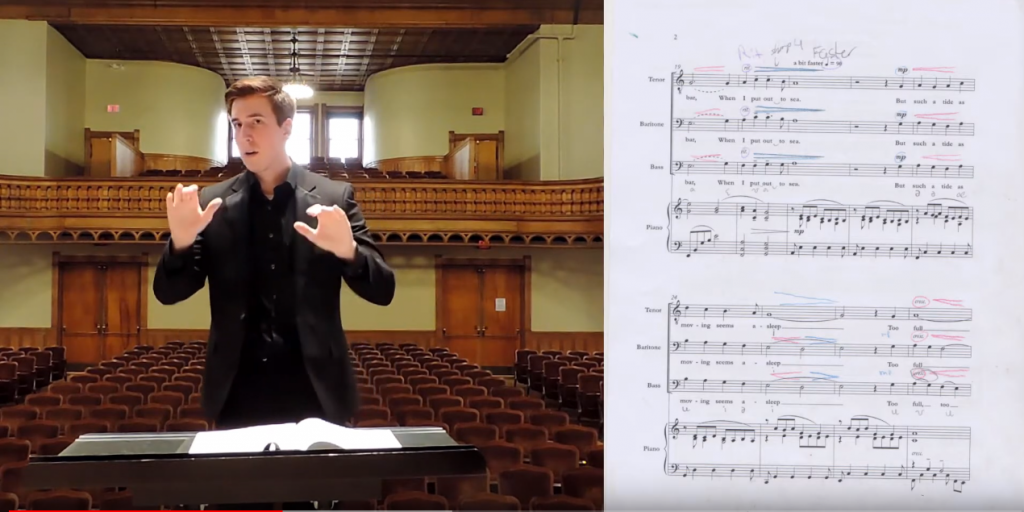 “We had many performances planned for the rest of the semester and pieces that we have been working on I was extremely excited to perform. I felt gutted that my last semester with this group was suddenly taken away, obviously for understandable reasons. I felt like I wasn’t truly going to have a final performance and an opportunity to say goodbye to a constant throughout my academic career here at Syracuse,” she says. “While the virtual performance isn’t exactly what I had intended for my final performance as an undergraduate student, I am really thankful we are doing something. Working on the virtual performance has truly given me an outlet and opportunity to accomplish that.”

Stasior says performing individually has given her a different perspective: “At times, I felt funny singing and recording it in my apartment alone because it is unusual to be performing a piece of this caliber alone. However, this project is a great reminder of how essential we all are as individual members to a larger group. The piece does not make sense until all of our individual videos are together, performing ‘side by side.’ Each person in the choir is necessary for the song to sound correctly. Therefore, while I feel funny in the moment, I know that my best work is required for the whole thing to work.”

Ronny Ditchek is a first-year music education major in the Setnor School and the School of Education from Brooklyn, New York. He sings tenor for both the Setnor Sonority and the Hendricks Chapel Choir.

“The virtual choir project has been my favorite part of remote learning. Through this project, we have the utmost privilege to not only be premiering a composition from a prestigious competition but are able to celebrate the 150 years of Syracuse remotely,” Ditchek says. “It shows that even though the coronavirus can take away our residential learning, it can never stop us from singing and doing what we love. It also shows that our work for the year is not done yet and that a situation like this cannot stop us from achieving that agenda.”

“These projects have also given me the advantage to reconnect with my other talented and amazing colleagues, which also shows that no matter what, we can always connect and sustain our community,” Ditchek says. “It’s also great because through this contact, it helps me relieve the homesickness of Syracuse because of how I am used to seeing them during certain times a week. I believe that music now is essential for the world to just cherish what we have and what we will always have no matter the circumstance.”

Stasior says one of the ideals the choirs stand for is singing in times of sadness and times of joy. “I think it’s fitting that in this current situation, we come together and sing. Being in Hendricks is when I feel my greatest bond to Syracuse—the University and the community. When I am working on this piece, I feel that connection, a little bit of pride and a whole lot of love. I am reminded through all of this how grateful and thankful I am for this ensemble, for Dr. Laver and especially Dr. Calvar, for always putting in the care and effort needed to succeed.”

“Music has healing powers,” says Calvar. “This is a living, breathing manifestation of that, and a testament to the resilience of our students.”