As Syracuse University transitions to an online learning environment, Orange After Dark (OAD) is also making the shift. OAD, the University’s late-night entertainment program organized by the Office of Student Activities, is hosting a series of events that students can enjoy wherever they are.

“Orange After Dark, whether in person or virtually, gives students a space to meet and engage with one another,” says Lorena Silva, assistant director in the Office of Student Activities. “We give students something to do so they don’t feel alone—whether that’s a Friday night on campus or if they’re experiencing that now at home.” 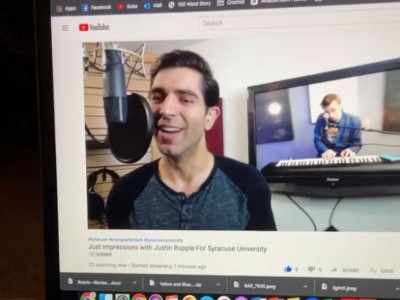 Justin Rupple, a comedian and impressionist, entertained over 100 students at an Orange After Dark event on April 9.

The program already has seen success with its virtual programming, hosting Justin Rupple, a comedian and impressionist on Thursday, April 9. Over 100 students tuned in as Rupple did impressions, including one of Professor Snape from Harry Potter singing “Imagine” by John Lennon.

Eliza Zachowicz, a graduate intern in the Office of Student Activities, organized and attended the event. “It was hilarious. I truly enjoyed myself,” says Zachowicz. “My personal favorite was when [Rupple] performed a monologue from “Christmas Vacation” as Shrek and Donkey.”

There will be four more events this semester occurring Thursday and Friday nights, beginning at 10 p.m. Eastern time, keeping in line with traditional OAD hours.

The first event on Thursday, April 16, will feature comedy magician Trent James. James will be performing a comedic magic show via Zoom, and at the end he will teach students how to perform tricks at home. 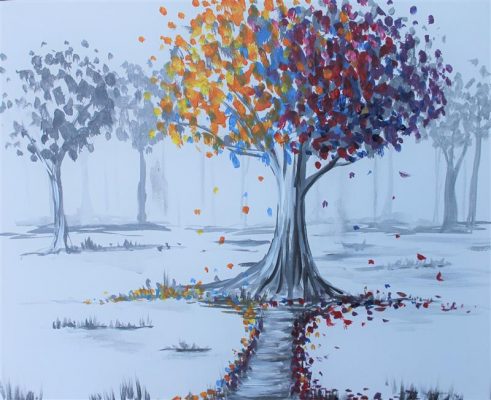 Claire McKenney, a Syracuse artist, has previously led painting events for OAD, including one that featured the above painting.

On Friday, April 17, Syracuse artist Claire McKenney will teach students how to paint with available materials. All paintings can be done with a variety of tools and only using one color.

Students are encouraged to visit the OAD website for more information and to register for the events. Announcements regarding the events will also be shared on the Office of Student Activities Twitter, Facebook and Instagram accounts.