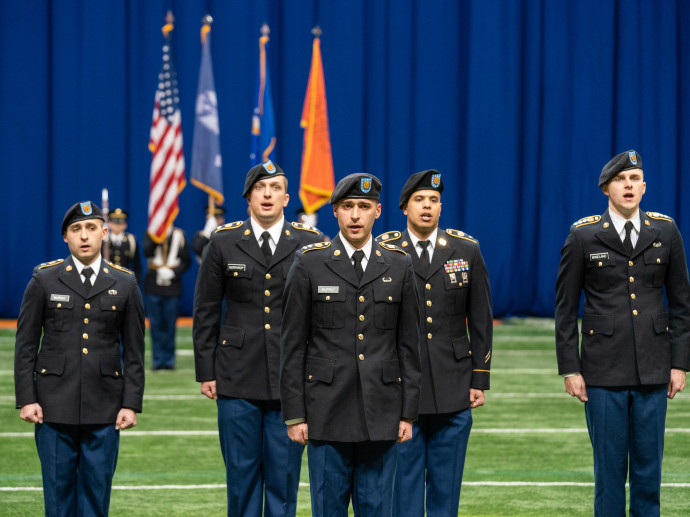 On April 10, cadets from the University’s U.S. Army and Air Force Reserve Officer Training Corps (ROTC) were honored with various distinctions from the University and community organizations as part of the yearly Chancellor’s Review Awards. Normally celebrated as a public event on-campus, this year’s in-person review was canceled due to the CoVID-19 health crisis.

The honors, now in their 103rd year, celebrate the ROTC cadets and their commitment to service in a nod to the University’s long history of military commitment and support. Syracuse boasts the longest consecutively running ROTC program in the country—a legacy in keeping with the University tradition of support for the veterans and military families as the “best place for veterans.”

“Our Army and Air Force ROTC programs and cadets exhibit drive, ambition and hard work and make this University proud,” says Ron Novack, executive director of the OVMA. “Our ROTC programs remain a critical element of our campus, community and defense of our nation. It is a privilege to have them as students and work alongside them as they prepare to lead the next generation of our country’s armed forces.”

Awards presented include the General Edward C. Meyer Leadership Award, an honor bestowed on the most outstanding Army ROTC cadet who demonstrates extraordinary officer potential and leadership qualities. This year, the award was presented to Cadet Marshall Lipsey ’20 who received an additional two honors.

Syracuse University’s Office of Veteran and Military Affairs presented its Commitment to Service Award to Air Force Cadet Caleb Holmes ’20 and Army Cadet Kathleen Edwards ’20. Presented to cadets who are either veterans or military dependents, the honor recognizes high achievement in academics, commitment to service and a proven understanding of citizenship through patriotism and community service.

See the full list of the award recipients as announced by Chancellor Syverud.

The ROTC program is an integral piece of the University’s commitment to the veteran and military-connected population. Recently ranked the No. 1 private school for veterans by Military Times, for the third time in four years, Syracuse is furthering its commitment with the opening of the National Veterans Resource Center (NVRC), a first-of-its-kind multi-use facility dedicated to advancing academic research, programming and community-connected innovation serving the social, economic and wellness concerns of the nation’s veterans and families. A grand opening ceremony for the NVRC is being planned for fall 2020.