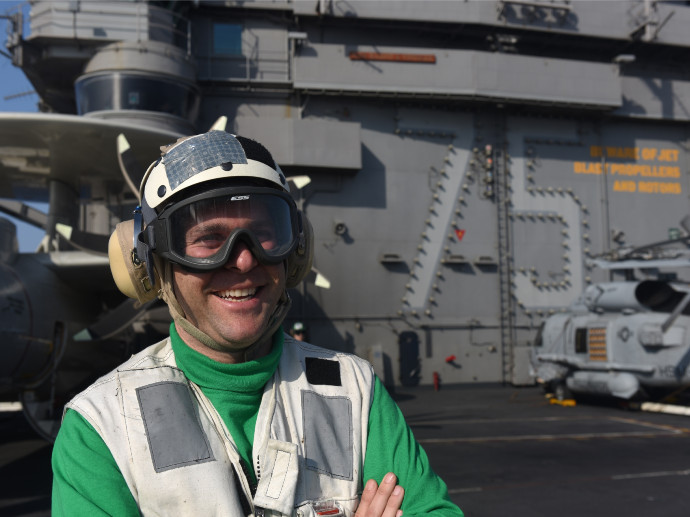 For many, joining the military is as much a matter of family tradition as it is a commitment to serve. For Syracuse graduate student and third-generation Naval officer Chris Giglio, it was also a matter of building on a personal history.

“I served six years in the U.S. Coast Guard. Within two years of leaving active duty, I knew I belonged back in the military,” Giglio says. “I was raised on sea stories from my father and grandfather, both naval officers, and I set my sights on following in their footsteps.”

As an enlisted Coast Guardsman, Giglio completed tours on a Marine Protector-class patrol cutter and as a jet aircrewman. Upon commissioning in the Navy, he had the opportunity to honor the service of both his Navy family predecessors.

“I completed two tours as a surface warfare officer, like my grandfather, and loved it—mastering the art of shiphandling was especially rewarding for me,” says Giglio. “I then transferred to the public affairs community as my father had. I saw it as an opportunity to advocate for the Navy as a whole, and to tell the incredible stories of the service and the sailors carrying out good work around the world every day.”

After an initial tour in public affairs, Giglio was offered the opportunity to attend one of several Navy-sponsored graduate programs in public relations. After being assigned to a different program, he jumped at the opportunity to attend Syracuse. Giglio credits the quality and reputation of the public relations program at the S.I. Newhouse School of Public Communications, as well as the prospect of simultaneously pursuing a certificate of advanced studies in public administration from the Maxwell School, in guiding his decision.

“The opportunity to participate in both programs was a huge draw for me,” says Giglio. “I find that the Maxwell courses complement what I learn at Newhouse. I think my time at Syracuse is not only enhancing my public relations skillset, but also making me a more well-rounded officer with a more nuanced worldview and better understanding of national security.”

“Leading sailors is the most rewarding part of being a Naval officer,” says Giglio. “I can’t think of another Navy graduate education program that provides the opportunity to keep that leadership competency sharp.”

Giglio is the third consecutive Navy public affairs officer to attend Syracuse for the Newhouse and Maxwell courses of study. While he chose Syracuse for the academic reputation of its graduate education, Giglio notes that he was not expecting the quality of programs or level of support for military connected students that Syracuse provides.

“It’s not just the impressive portfolio of veteran support programs or the University’s long ROTC history—it’s down to a very personal level,” Giglio says. “Faculty and staff are genuinely interested in the individual and are motivated toward continually improving the military-connected experience at Syracuse.”

As Giglio’s time at Syracuse winds down he is preparing to graduate and move on to his next tour on the staff of Commander, Naval Forces Europe and Africa/U.S. 6th Fleet in Naples, Italy. He credits his time at Syracuse for laying out a roadmap for the rest of his Naval career.

“I’m not a public relations practitioner who happens to be in the Navy,” says Giglio. “I am a Naval officer first, and I do what I do because I truly believe in the Navy, its sailors and its missions. My time at Syracuse has been invaluable in adding to my toolbox and being able to better communicate on behalf of the Navy.”