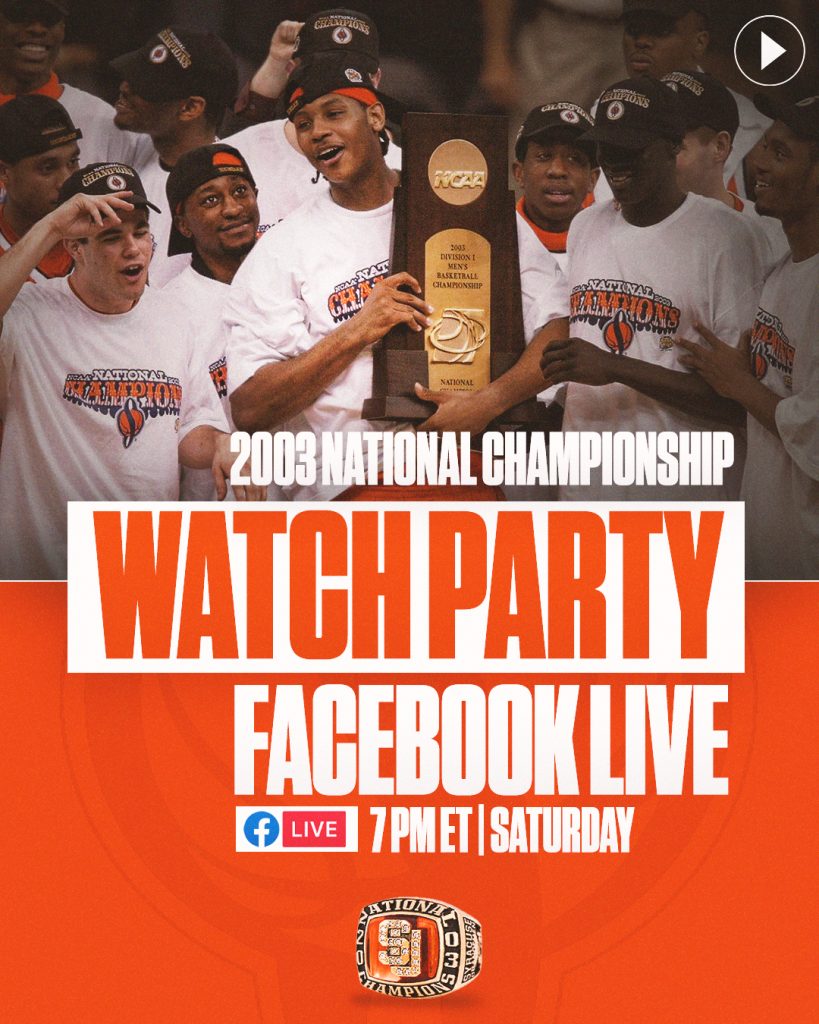 Syracuse fans have a unique opportunity to relive the 2003 NCAA men’s basketball championship game between Syracuse and Kansas with some of the key players in the Orange title win. On Saturday, April 4, CBS Sports Network will air the contest at 7 p.m. EST, and Syracuse University will supplement the coverage with a Facebook Live “virtual watch party.”

“Voice of the Orange” Matt Park ’97, who was the radio color analyst on the Syracuse Network for the title matchup, will host the Facebook Live gathering. A number of prominent personalities associated with the game are expected to join Park during the re-broadcast. Coach Jim Boeheim, who guided the Orange to the championship in 2003, plans to watch along with his family, including current college players Jimmy (Cornell) and Buddy (Syracuse). In addition to checking in with the Boeheims, Park is looking forward to chats with Gerry McNamara, Kueth Duany, Craig Forth, Josh Pace and Matt Gorman, five members of the 2003 squad, as well as Washington coach Mike Hopkins, who was a Syracuse assistant coach.

Mark Johnson, who called the game with Park on the Syracuse Radio Network, and prominent Syracuse media alumni Pete Thamel ’99 (Yahoo Sports) and Adam Schein ’99 (CBS Sports Network, Sirius XM) are also lined up for appearances. Current athletic director John Wildhack ’80, who was an executive at ESPN at the time, will add his perspective.

Fans can join the Facebook Live “virtual watch party” by linking to www.facebook.com/Cuse/live/.

In the greater Syracuse area, CBS Sports Network is available on the following channels:

For more than 60 years, Syracuse University has been giving high school students the opportunity to learn about potential careers and college majors through its nationally recognized pre-college program, Summer College. The University continues its commitment to welcoming and celebrating…