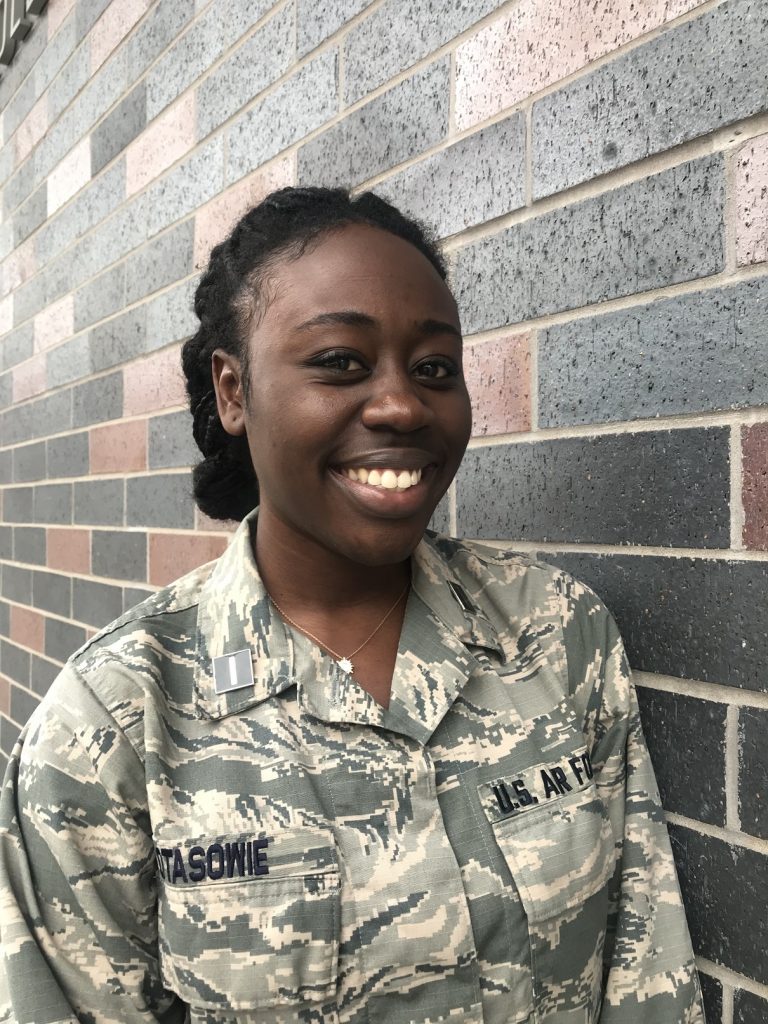 Where did you grow up and what led you to attend Syracuse?
I am originally from Nigeria. I was born there and grew up in Southern California about an hour away from Los Angeles in the Antelope Valley. I came to Syracuse Law after I completed my undergrad at a very community-focused school. There, the students helped and encouraged one another. I wanted to attend a law school with a similar feel, where it felt like everybody was on your side and willing to help you do better rather than compete with you or tear you down.

What motivated you to join ROTC?
There were a lot of little moments that led to me joining. I interned with the International Services and Armed Forces branch of the American Red Cross. There, I learned I was interested in international law and working with military members. Someone mentioned doing the JAG (Judge Advocate General’s Corps) program because I was interested in law. I didn’t really think too much of it because I had never wanted to join the military.

It wasn’t until I graduated undergrad and was packing up to move for a law school when, at Home Goods with my mom, I met a woman who was retired after a career in the Air Force. She happened to ask me what I was going to do now that I was done with school. I was going to law school and I was interested in becoming a JAG officer but that I didn’t know what that looked like or who to talk with to make it happen.

She talk to me for an hour about her daughter who had just graduated as a JAG with the Air Force and all the things that she was getting to do as a result. It was amazing just hearing her story and right there I was convinced that I needed to join the Air Force and apply for the JAG program.

What was the application and selection process like for the program?
The Air Force allows you to apply your first year of law school. You fill out an application online, write a motivational statement and explain why you want to join. You then meet with the detachment commander and you go in for an interview with the staff judge advocate. It feels like a long interview.

Your package is submitted to the board, and you’re competing against students all across the country so it’s a pretty big deal because the exception rate is very low.

Not only was I accepted but so was Aly (Alyssa Kozma) which is amazing! To the best of my knowledge, we are the only two Syracuse law students to be admitted, and both female.

What have been some rewarding experiences at Syracuse and with ROTC?

My most rewarding experiences have been meeting the people here. I’m so impressed by the ROTC students who are in the program. Their dedication and motivation is so contagious and so inspiring! They all give 110 percent all the time, and it really pushes me to try my best as well.

Through the law school I have met alumni who are former JAG officers in different branches. All of them have been willing to help me, mentor me or answer any questions. I’ve also met alumni who are civilian lawyers and judges who have JAG officer friends that they have contacted on my behalf when I have had questions. Through ROTC and the law school, I’ve been encouraged, helped and supported in a way that I never expected.

What are your aspirations after graduation and in your military career?

I want to try cases and do trials for the military. I also like legal service work, so engaging with clients one-on-one regarding their personal legal issues such as getting them out of a housing contact because they have to move or deploy.

I hope to work my way up to international law. I’m really interested in diplomacy and working with different countries.

What does it mean to attend a school committed to military service members?
It’s a big deal! It’s great to have that support and representation. For me, the idea of being a service member is still new. I’m still learning everything that does along with it but it’s nice to Syracuse has the support available should I ever need it.

In addition to ROTC, I am a part of the law school’s student ambassadors’ program, the International Law and Commerce Journal and a member of the Advocacy Honor Society on the Trial Division and Team for which I was recently elected communications director.

Finally, I just want to acknowledge the support of my friends, family and those at Syracuse who have supported me. I am so proud to be a part of the United States Air Force and so glad to be on this journey with Aly. I know I can turn to her or look to her for help and encouragement. 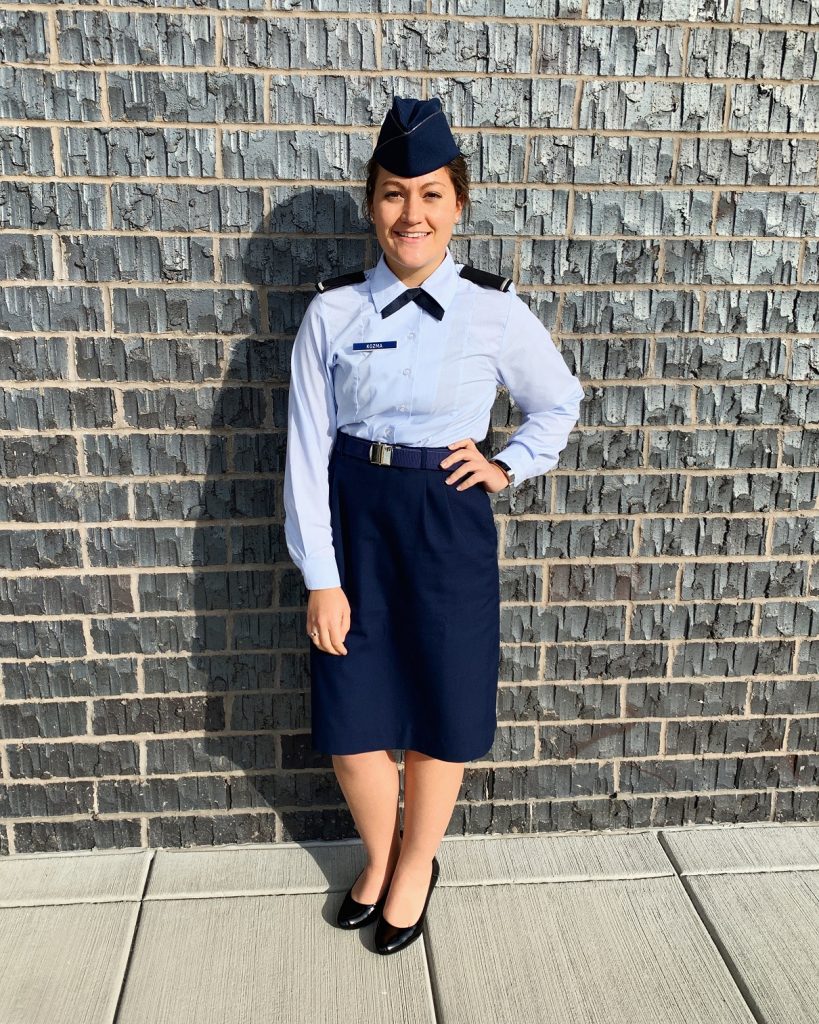 Tell us about where you grew up and what led you to attend Syracuse.

I grew up in a military family—my mom was in the Army and my dad was in the Air Force. We spent time in Nevada, North Dakota and Nebraska. I spent most of high school and did my undergraduate in Nebraska. I graduated from the University of Nebraska, Omaha, with a bachelor of political science in 2018. While I was in Omaha, I worked as a civilian analyst for the Air Force at United States Strategic Command. I always knew I wanted to go to law school, but it was there I found my passion for military, foreign policy and national security matters. Being immersed in the military environment also confirmed for me that I did want to follow in my family’s footsteps and serve myself.

I thought really hard about my decision where to attend law school. I chose to pack up and move to Syracuse for the exceptional National Security and Counterterrorism program offered by the law school. I also love to be outdoors so the beauty of upstate New York and all it has to offer with parks, lakes and waterfalls was a big draw. My sister is also a cadet at the U.S. Military Academy at West Point. Coming to Syracuse meant I would only be a few hours away from her, and we would have each other to lean on as things got tough in our own academic/military journeys.

What motivated you to join ROTC?

I chose to join ROTC and pursue a commission in the U.S. Air Force because I want to honor my family’s long tradition of military service and because I hope to use my education and experience to further a cause greater than myself. ROTC allows me to develop as a person and a leader alongside my educational development through the law school.

Tell us a bit about the JAG program you are pursuing. What was the selection process and how did you get involved?

I applied to the JAG Corps in the second semester of my first year of law school. The Graduate Law Program (GLP) is an expedited two-year Air Force ROTC program for law students. GLP students are guaranteed a position as an Air Force judge advocate, a military lawyer, upon successful completion of the Air Force ROTC program, graduation from an approved law school, and completion of legal licensing requirements. This is a unique opportunity as the overwhelming majority of ROTC cadets are in their undergraduate programs and the majority of judge advocates are selected after law school graduation.

What have been some of your most rewarding experiences at Syracuse and with ROTC?

The most rewarding part of ROTC, for me, has been the opportunity to interact with such an inspiring group of cadets. We all come from such different backgrounds, we all have different interests and experiences, but we all share hopes of military service. As someone who’s “been there, done that” when it comes to college, I’m able to provide another perspective to the group.

What are your military and post-Syracuse career aspirations?

As a judge advocate, I aspire to focus my practice in the areas of international law and operations law. It is a long-term goal of mine to become a staff judge advocate in order to serve as legal advisor to a combatant commander.

What does it mean to you to attend a school that is so committed to military service members?

I think it’s an incredible opportunity to be at a school that has such strong support for the military community. I can especially see the impact at the Veteran’s Legal Clinic, hosted at the law school, where so many students are committed to assisting veterans and their families using the skills they’ve developed.