Point of Contact will once again host nationally and internationally celebrated poets for this year’s Cruel April Reading Series, which will be held Thursdays in April at 6 p.m. In response to the rapidly developing situation surrounding COVID-19, Point of Contact will kick off the series with a livestream reading on its Facebook page by Natalie Scenters-Zapico on Thursday, April 2. 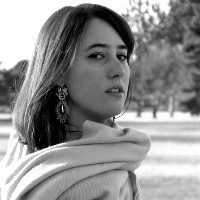 Her poems have appeared in a wide range of anthologies and literary magazines, including Best American Poetry 2015, POETRY, Tin House, Kenyon Review and more. Currently, she holds fellowships with the Lannan Foundation and CantoMundo. Scenters-Zapico is currently a poet in residence at the University of Puget Sound and a recipient of the 2018 Ruth Lilly and Dorothy Sargent Rosenberg Fellowship from the Poetry Foundation.

The Cruel April series is possible thanks to the support of the College of Arts and Sciences, the Coalition of Museum and Art Centers and the Department of Languages, Literatures and Linguistics at Syracuse University, the New York State Council on the Arts and CNY ARTS.