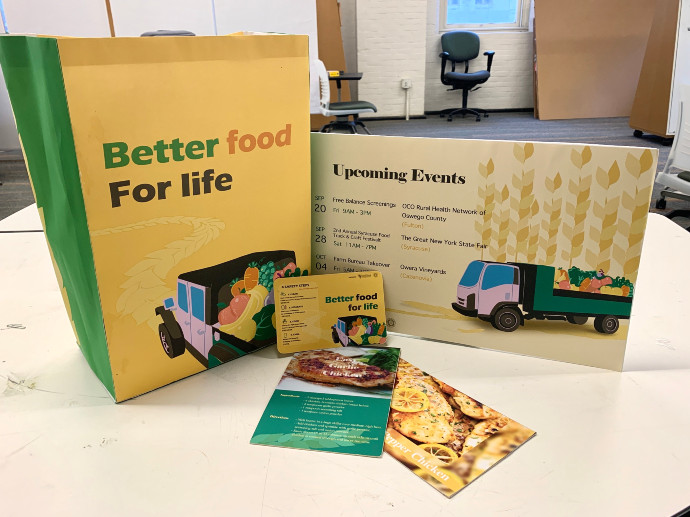 Students in the master of fine arts program in design have been working with the Food Bank of Central New York to raise community awareness of a new, innovative food delivery service. Elements of all of the students’ designs were combined into a final campaign of table posters, recipe cards, shopping bags and refrigerator magnets featuring food safety reminders.

For the past year, students in the College of Visual and Performing Arts’ master of fine arts (M.F.A.) program in design have been working with the Food Bank of Central New York to raise community awareness of a new, innovative food delivery service. A mobile pantry allows the Food Bank to do direct food drops at key locations throughout the Central New York region, especially at times such as the holiday season, when school lunch programs are not available for local children.

The Food Bank had partnered previously with the M.F.A. in design program in fall 2018. At that time, several teams of students explored a range of ideas, including a vehicle designed to allow Food Bank personnel to travel to area neighborhoods, distributing food samples. So, for this latest need, the Food Bank came to the design program once again for concepts.

The students and professors were eager to take on the project, since it offered a chance to work directly with a client on a real-world assignment. “This experience aligns with the goals of my teaching efforts to incorporate community-based initiatives into my work with students,” says Professor Michele McCaffrey, who collaborated with Professor Don Carr on the project. Many of the graduate design students are international, and the community-based effort benefitted them by offering enhanced learning opportunities outside the campus experience.

The M.F.A. students took part in a few brainstorming sessions during the summer, then developed those ideas through the fall semester. Their goal was to enhance product variety and distribution using the Food Bank’s outreach plan. Specialized cooler bags were provided by PepsiCo as part of the company’s Food for Good program, which aims to make nutritious food more physically and financially accessible to low-income families. 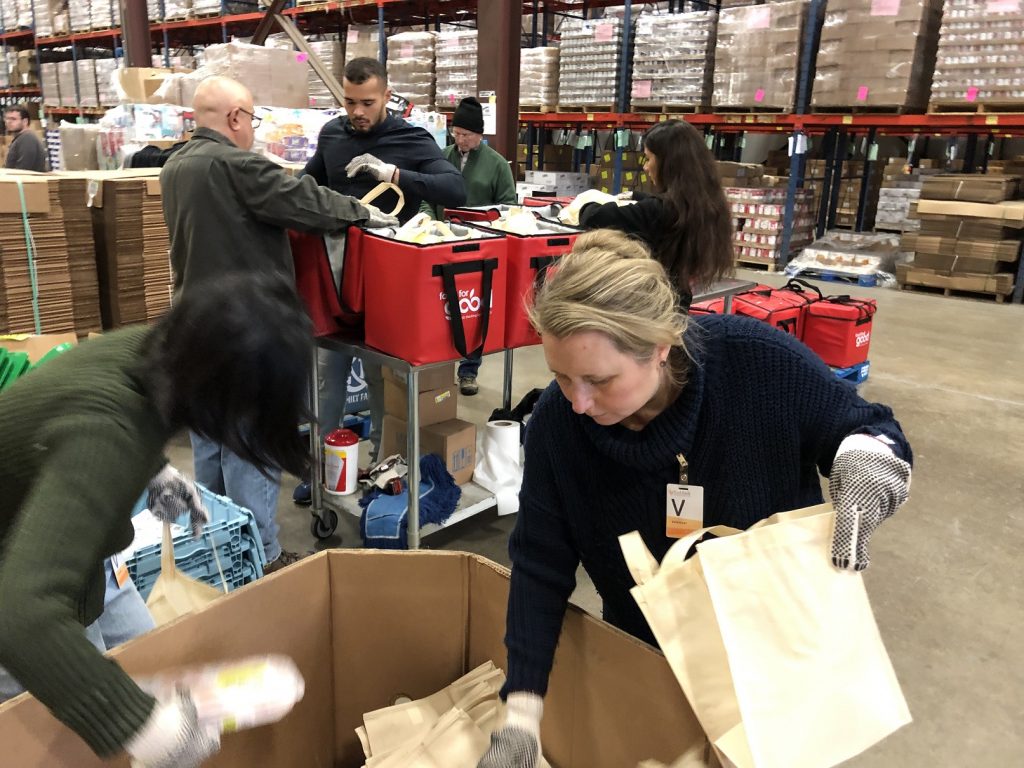 At the end of the semester, Professor Michele McCaffrey and the M.F.A. students participated in two hands-on events that brought the classwork and community outreach aspects together. The group met at the Food Bank’s facility, where they packed 140 bags of meat protein to be distributed to families.

“We’re delighted that PepsiCo is partnering with our design students on food security in the Central New York community,” says Gary Girzadas, the University’s executive director of corporate and foundation relations. “We look forward to future collaborations with PepsiCo, an important business and recruiting partner, supporting learning opportunities for our students and impacting the community.”

Each student created four unique branding and messaging ideas for the initiative, then presented the work at a meeting with key Food Bank staff. The project was especially challenging, since much of the imagery created had to be understood easily by people of diverse backgrounds and nationalities. Elements of all the designs were combined into a final campaign of table posters, recipe cards, shopping bags and refrigerator magnets featuring food safety reminders.

“The biggest gain for me was working from the initial design to the final project launch and practical use,” says Jiayu Kang G’21. “I now have a more intuitive feeling of the whole process and believe it will play an important role in my future career.”

Service to the Community

At the end of the semester, McCaffrey and the students participated in two hands-on events that brought the classwork and community outreach aspects together. The group met at the Food Bank’s 75,000-square-foot facility, where they packed 140 bags of nutritious meat protein to be distributed to families. 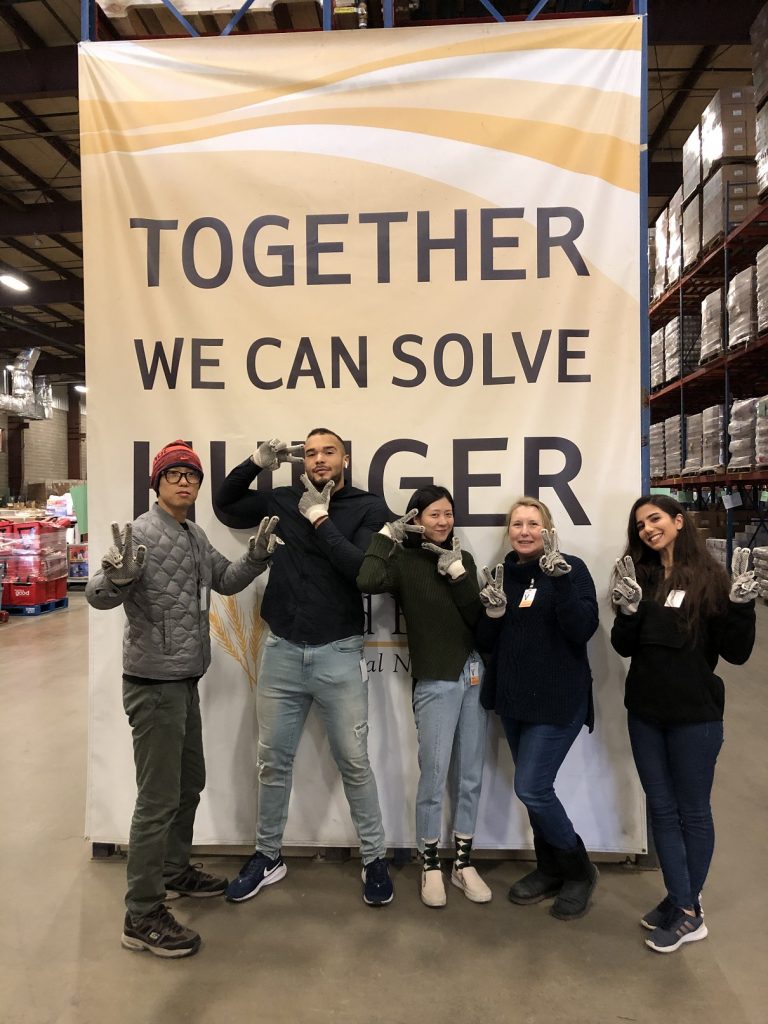 At the end of the semester, Professor Michele McCaffrey and the M.F.A. students gathered at the Food Bank’s facility, where they packed 140 bags of meat protein to be distributed to families.

Their second event was to join the Food Bank’s Mobile Pantry truck at the Syracuse City School District’s Dr. Edwin Weeks School. There, they assisted Mobile Pantry coordinator Renzo Quesada in making sure the items that had been repacked by the class, along with boxed produce and bread products, were distributed properly to the families receiving the goods that day. Each bag contained approximately 10 pounds of food, translating in total to 1,400 meals, according to Peter Ricardo, Food Bank of Central New York’s product donations manager. “Our thanks to the class and Professor McCaffrey for their great efforts on this meaningful project,” he says.

According to McCaffrey, students who have never worked with real clients or encountered communities in need of food found this project to be a profound learning experience. In comments written at the end of the semester, her students agreed. “We cooperated with real customers, which has not only increased our design experience, but also our ability to communicate with them,” says Shane Zhang II G’21, whose work was chosen for the final design graphic. “We also helped the Food Bank in community service—I’ve never been involved in such an event before and am so glad to have gained many valuable experiences through this project.”