Romani justice scholar and activist Margareta (Magda) Matache, director of the Roma program at the Harvard FXB Center for Health and Human Rights, will present the School of Education’s annual Zell Lecture on Tuesday, March 3, at 6 p.m. in the Physics Building’s Stolkin Auditorium.

Her talk, “The Roma Case for Reparations,” is free and open to the public. Communication Access Real-Time Translation will be provided. Free parking is available in the University Avenue lots. 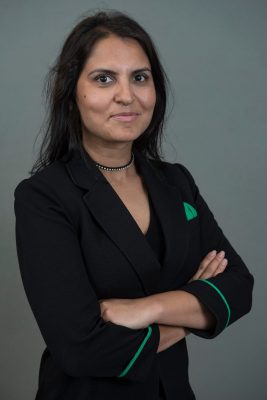 The Zell Lecture is presented by the interdisciplinary minor in atrocities studies and the practices of social justice.

The Roma in Europe have been persecuted for more than five centuries, particularly in Central and Eastern Europe. Romani peoples have been enslaved (reparations for Roma enslavement in Romania is the topic of Matache’s talk), subjected to “Gypsy hunts,” and forcibly removed from their families to be adopted by non-Roma. Matache’s talk will examine reparations as an element to healing and accountability, across the globe and in the case of the history of the enslavement of and injustice against the Roma. She will discuss the concept of reparations, translating theory into possible strategies that may prevent future wrongdoing.

In the 20th century, Roma were targeted for extermination by the Nazis—through involuntary sterilization under the 1933 Law for the Prevention of Offspring with Hereditary Diseases; were banned to intermarry under the 1935 Nuremberg Laws; labeled as “anti-socials” under the 1937 Laws Against Crime; confined to ghettos; and murdered in killing centers and massacred by mobile killing units. Some estimate that up to 70 percent of the Roma population was exterminated in the early- to mid- 20th century.

The vestiges of these atrocities remain in the systemic racism and denial of human rights, according to Julia White, assistant professor in the Department of Teaching and Leadership in the School of Education, and coordinator of the minor in atrocities studies and practices of social justice. White is also a scholar of Romani culture and history, having been a Fulbright scholar to the Slovak republic, and completing her dissertation research on the education of Romani children in Slovakia. She says that Roma are often denied housing and forced to live in settlements outside of towns. They are refused employment; the unemployment rate for many Romani is 25-55 percent throughout Europe (compared with 5-20 percent for non-Roma), with some regions as high as 100 percent.

“Romani children are vastly overrepresented in special education, with the majority being taught in segregated schools,” White says. “Roma women are still sterilized without consent, and there are still pogroms against Roma.”

Matache will talk about how Roma are calling for reparations for enslavement and a mending of the Roma culture that has suffered since slavery was ended during the industrial revolution. “By acknowledging this enslavement, and the impact of continued, systemic racism, she will both highlight a history that is largely unknown and allow us to make parallels to other cases,” White says.

White says Matache’s message connects to present-day issues and will inform how we think about justice in on our campus and in our country. As coordinator of the interdisciplinary minor in atrocity studies and practices of social justice, White educates about how to recognize oppression, but also how to stand up to atrocity through having informed conversation, activism or larger-scale movements.

“We have a responsibility to learn history, not to be willfully ignorant of how history shapes current repressive and oppressive systems,” White says. “We have to acknowledge the past, and act on it in material ways, to ensure that everyone can enjoy the human rights to which they are entitled.”

The Zell Lecture is sponsored by Lauri ’77 and Jeffrey Zell ’77. This annual lecture invites speakers from disciplines related to the intersections of history, memory, international human rights to discuss how we can use the lessons of the past to inform and improve our world. Co-sponsors of this year’s event are the Syracuse University Humanities Center, the Lender Center for Social Justice, the College of Law Journal of Global Rights & Organizations and Impunity Watch News, the International Relations Program, the Social Sciences Ph.D. Program and the Department of History.