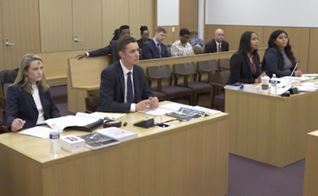 Two Syracuse University professors have teamed up in an innovative cross-campus collaboration to allow future television reporters and future lawyers to experience the drama of a high-profile murder trial.

Professor Elliott Lewis of the Newhouse School and Professor Todd Berger of the College of Law have brought their classes together for the mock trial of People v. Mitchell, a fictional case involving the shooting death of a young woman. The victim’s husband stands accused of her murder.

Berger teaches a course in evidence and trial advocacy. His students are playing the roles of prosecutors and defense attorneys, questioning witnesses and making objections during testimony.

Lewis teaches a graduate course in television reporting. His students are practicing their skills as television journalists, performing live updates during breaks in the trial and producing a narrated report after its conclusion.

The master’s students in Lewis’ class were required to request permission from the judge, played by Berger, to allow a television camera in the courtroom and must adhere to the judge’s restrictions limiting its movement. The law students in Berger’s class were instructed to make themselves available for interviews with the reporters following the verdict.

“With a top-rated journalism school and a top-rated trial advocacy program located on the same campus, it doesn’t make sense for us to stay isolated in our academic silos,” Lewis says.

“I honestly don’t know of another law school that has attempted something like this in a beginning trial advocacy class,” Berger says. “It gives law students a taste of having to represent a client in the media as well as in the courtroom.”

The two professors came up with the idea when Lewis approached Berger about having his students observe a mock trial to learn more about the court system. Berger proposed having the journalism students cover it like an actual trial, exposing the law students to working in the media spotlight.

“I have this dream that some of these students will meet again at a real trial someday,” Lewis says. “And both the reporters and the lawyers will have a better understanding of where the other side is coming from as a result of this experience.”