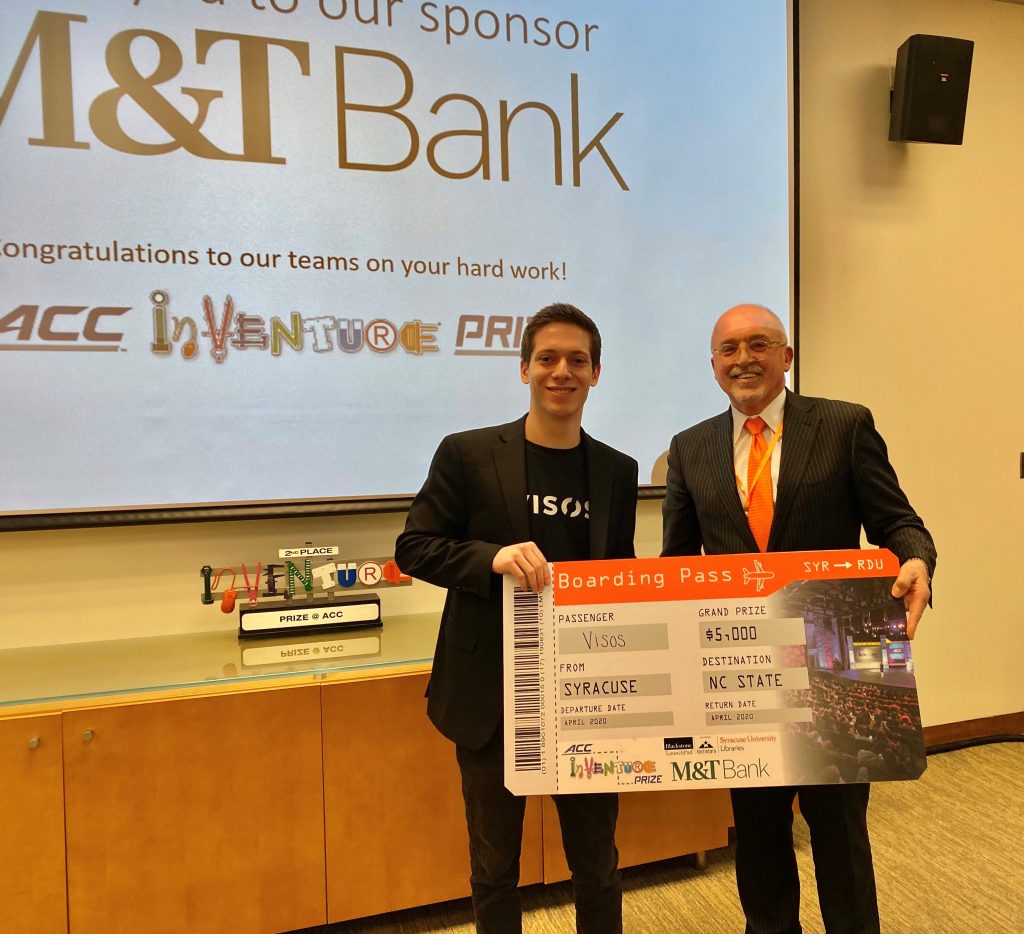 He received a $5,000 cash prize, sponsored by M&T Bank, and an all-expenses-paid trip to participate in the Atlantic Coast Conference (ACC) InVenture Prize 2020 on April 15 at North Carolina State University in Raleigh.  ACC’s InVenture Prize is a live televised “shark tank” competition composed of teams from the 15 colleges and universities represented in the ACC Academic Consortium.  At the qualifier competition on Feb. 21, Shumer was selected from among 18 Syracuse University student teams by a panel of campus and community judges.

“You may know VR for its gaming and entertainment purposes, but it can be used for so much more,” Shumer says. “From pain management, to surgical training, to therapy, rehabilitation and palliative care, Visos is rethinking VR and building a headset and software platform from the ground up to meet the needs of medical users.”

First alternate, or runner-up, in the campus competition was PAANI, founded by Nikita Chatterjee ’20 and Brianna Howard ’20. PAANI is a global health startup company that is working towards providing a sustainable solution for the water contamination issue in India.

Five winners of a preliminary round will have the opportunity to participate in front of a live audience in the finals, which will be broadcast on PBS and streamed online.

“I believe that in the modern era, anyone can start a scalable, high-growth company and every metropolitan area should have a thriving startup community,” says M&T Bank Regional President Allen Naples. “By helping Syracuse University host the InVenture Prize Challenge, we’re investing in the exceptional creativity and ingenuity of our students and doubling down on our efforts to build our entrepreneurial community into one that generates jobs and prosperity for generations to come.”

The Blackstone LaunchPad powered by Techstars in Bird Library is Syracuse University’s innovation hub, connecting the entire University’s resource-rich ecosystem with a global network that provides support for aspiring entrepreneurs, inventors and creators. The program serves faculty, staff, students and alumni across disciplines who are interested in innovation, invention, entrepreneurship, venture creation, and taking ideas from concept to commercialization. The program supports a key pillar of Syracuse University’s Academic Strategic Plan to create an innovation ecosystem across the institution that prepares participants to be trailblazers in an entrepreneurial world.