Very early on winter mornings, Scott Reynolds navigates a payloader along the streets and through parking lots on the Syracuse University campus. Following a snowfall, Reynolds and his 60 colleagues on the Facilities Services grounds team work to clear the campus of snow as quickly and efficiently as possible. 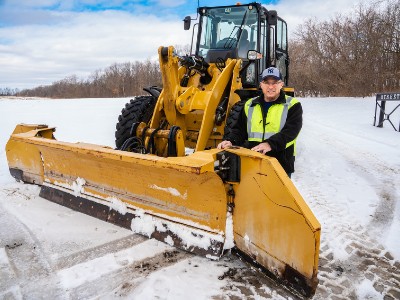 Reynolds works the 6 a.m. to 2:30 p.m. shift, before campus stirs to life each morning, but teams work around the clock during the winter to keep the University’s four miles of streets, 26 miles of sidewalks and countless stairs, exits, entryways and curb cuts clean and accessible.

Reynolds has worked for Syracuse University for 42 years. In his first few years, he was part of the team that shoveled sidewalks and stairs by hand. He later began to operate small equipment, large plow trucks and salters, and now operates heavy equipment. “You never totally get out of shoveling,” he jokes. “Everybody has to do it, even in a loader you have to get out and shovel. And I don’t mind.”

Reynolds operates his payloader along a prescribed route each day. He starts at Facilities Services on Ainsley Drive, cleaning out in front of the Commissary, then heads along the back entrance of South Campus. His route takes him through the parking lots of the Lampe Athletics Complex and onto Comstock Avenue. From there, he heads to College Place, where he cleans the street, sidewalk and Life Sciences parking lot. He then heads to Waverly Avenue, up past Crouse-Hinds Hall and into the Quad 1 parking lot. Once those roads and sidewalks are clean, he heads down to Walnut Avenue and Walnut Place to clear sidewalks and curb cuts.

Removing snow on campus presents a unique challenge in that it must be done around parked cars and among heavy vehicle and pedestrian traffic. And the thing about snow is that it doesn’t hold consistent to any time, temperature or measurement. What is needed is a team that pulls together to get the job done, and one of the most necessary things is for everyone to have patience, Reynolds says. “I have been doing this a long time, and it’s just patience. It’s going to get it done.”

Past snow events are close in his memory. He worked around the clock during the blizzards that struck Central New York in March 1993 and March 1994, when the snow fell as fast as he could plow it. He remembers when several inches fell on Syracuse on Commencement/Mother’s Day 1996. “I remember all these people coming to campus so nicely dressed, and we were out plowing this heavy, wet snow,” he says.

Traveling his route for so many years has given him a unique perspective, as he has watched the face of the campus change. “I was here when the Dome was built,” he says as he watches the current work on the facility. He remembers the day when Holden Observatory was moved to its current location. Some of the best memories he has are of people he has met and in assisting campus departments with special projects.

Reynolds is the proud dad of two Syracuse alumni, graduates of the Whitman School and the School of Education. He has a soft spot for students and always goes the extra mile to make sure they don’t have difficulty navigating the campus. The trickiest part of his route can be Waverly Avenue, which is heavy with pedestrian and vehicle traffic, particularly buses and trucks making deliveries. “I can’t stand to see kids walk through snow to get on a bus,” he says. “They want to go home and don’t want to be trudging through it.”

During the spring, summer and fall seasons, Reynolds operates heavy equipment for landscaping and deliveries, among other assignments. He also operates Facilities Services’ boom truck, which has an 85-foot extension and enables work to be done in high places.

Pat Carroll, grounds manager with Facilities Services, says Reynolds is a key member of his team. “As a longtime member of the grounds crew and a well-respected heavy equipment operator, Scott’s experience and professionalism will be difficult to replace,” he says. “Scott has an upbeat attitude and easygoing personality that makes him an easy fit with all crew members. He has always been willing to do the little extras that make the difference between a job done and a job well done.”

Did Reynolds think he would be at Syracuse University for more than 40 years? “No, I didn’t,” he says. “I really like the job…but I really do like it when spring comes along.”