From Ghana, With Duffle Bag 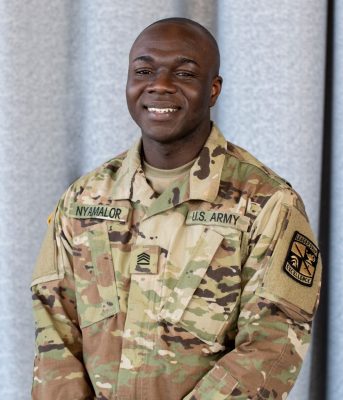 It’s not every day a student arrives on campus with their whole life tucked away into a single military duffle bag, but for Kelvin Nyamalor, a student veteran at Syracuse University, that was exactly how he arrived.

“I came here during the spring semester last year,” Nyamalor says. “There was a snowstorm coming, and some of the offices were closed, so I couldn’t get everything I needed to get into the dorm. One of the other student veterans took me in that night and the next day brought me back to campus. While I was getting settled, another student veteran took me out shopping. I didn’t have anything—no pillows, no covers, nothing. I only had my stuff in my duffle bag.”

Nyamalor’s journey to Syracuse University started in his hometown of Accra, Ghana. Growing up, he enjoyed sports like soccer, basketball and track. At the time, he aspired to work in the medical field and become a pharmacist.

Nyamalor came to the United States during his junior year of high school. His father had moved here earlier and settled in northern Virginia. It was during this time that Kelvin was first exposed to the military through a performance by the U.S. Marine Corps’ Silent Drill Team. Their performances have amazed crowds for decades, and on that day in Arlington, Virginia, the team inspired Nymalor to join the military.

“It was so skillful and synchronized, it was really impressive. I saw that and knew it was what I wanted to do,” he says. “Not necessarily the color guard, but join the military.”

After high school, Nyamalor enrolled in Northern Virginia Community College (NOVA), where his English professor, Jill Biden, former second lady of the United States, spoke highly of Syracuse University, where her husband, former Vice President Joe Biden, had attended law school. Nymalor applied to Syracuse University and was accepted, but paying for the tuition was going to be a problem. That’s when he had randomly ran into the same military recruiter that he remembered from high school.

“I originally met the recruiter while I was a senior in high school,” Nyamalor says. “I told him I wanted to finish college first and then join the military. It wasn’t until I was in community college and ran into him again that he explained how I could do both while also becoming a naturalized citizen.”

Nyamalor was in the position of realizing several of his dreams all at once. He could join the military, receive education benefits, get his U.S. citizenship and become a commissioned officer in the U.S. Army. He seized the opportunity and immediately after he finished his two years at NOVA attended basic training at Fort Leonard Wood in Missouri.

“Bootcamp was a bit of a shock, I hadn’t looked up anything about drill sergeants,” Nyamalor recalls. “But I really liked the discipline, I liked the attention to the small details. I still really like that aspect of the military, and I think it makes us stand out.”

While Nyamalor was undergoing his advanced individual training for his job in the military, he reached out to the admissions staff at Syracuse University to set up the next step in his journey.

“They were really great. I explained that I was in the military, sent them copies of my orders for my deferment, and they took care of everything else for me to come back and start classes in time for the Spring 2019 semester.”

It was towards the end of that first semester that Nyamalor would accomplish that next step; in April his naturalization paperwork was processed, and he became a citizen of the United States. As a citizen, he became eligible to serve as a commissioned officer in the U.S. Army and has now joined Syracuse University’s storied Army ROTC program.

“Becoming a cadet here has been one of my greatest experiences so far. I received the Minute Man scholarship [which provides tuition and financial assistance for Army ROTC Cadets], and I’ll be able to become an officer in the Army. Syracuse University has helped make my goals possible and that’s everything I could ever really want.”

Nyamalor is expecting to graduate in 2021. He plans to use his degree in information technology and management as a Signal Corps officer in the U.S. Army.