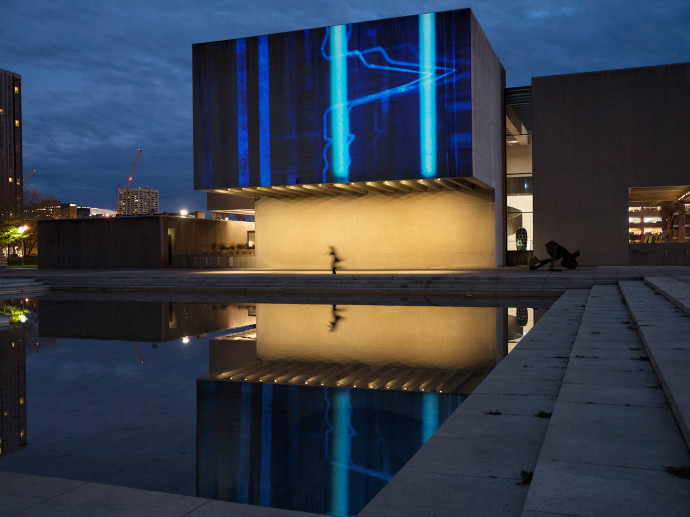 Light Work’s Urban Video Project (UVP) presents “Walled Unwalled,” an exhibition by 2019 Turner Prize recipient Lawrence Abu Hamdan. The work is on view at UVP’s outdoor projection site on the north facade of the Everson Museum of Art, 401 Harrison Street, through March 28, 2020, Thursdays through Saturdays, from dusk until 11 p.m.

In conjunction with Abu Hamdan’s exhibition, filmmaker Ana Naomi De Sousa presents a screening and talk, “Political Listening: The Forensic Turn in Art and Architecture,” on Friday, March 27, at 5:15 p.m., in Slocum Hall Auditorium. De Sousa will relate her experience as a research fellow in Forensic Architecture working on the Saydnaya Project, which used “ear-witness” testimony of survivors of Syria’s infamous Saydnaya prison to reconstruct its architecture. Her lecture will include screenings, including excerpts from “Saydanya” (2016) and Lawrence Abu Hamdan’s “Walled Unwalled” (2018). The auditorium is wheelchair accessible and we provide CART services for the talk. To make other accommodation requests or ask questions about facilities, please email info@urbanvideoproject.com or call 315.443.1369. All portions of this exhibition and indoor screening with filmmaker Ana Naomi De Sousa are free and open to the public. Light refreshments at the event.

Ana Naomi De Sousa is an award-winning documentary filmmaker and writer whose work addresses history, spatial politics, and identity. Her documentaries include “Angola – Birth of a Movement” (2012), “The Architecture of Violence” (2013) and “Hacking Madrid” (2015). As a collaborator with Forensic Architecture, she was the filmmaker on the 2016 Saydnaya Project. She has written for Al Jazeera English, The Funambulist, and The Guardian, among others. Her latest short, about a women-led rainforest conservation project in Ecuador, aired on Al Jazeera English in February 2020 as part of the a “Women Make Science” series.

“Walled Unwalled” comprises an interlinking series of narratives that derive from legal cases whose evidence individuals heard or experienced through walls or doors, bleeding through these seemingly impermeable barriers.

Employing reenactment, projection, and performed monologue, Abu Hamdan staged the entire piece inside a trio of sound effects studios in the Funkhaus in East Berlin, which was previously the broadcast headquarters for the GDR state radio and once broadcast propaganda throughout the Eastern Bloc and over the Berlin Wall.

Abu Hamdan (b.1985, Jordan) is an artist and audio investigator based in Beirut, Lebanon. His background as a touring musician led him to develop a deep interest in sound and its intersection with politics, which he now includes in his practice. His audio investigations have been used as evidence at the UK Asylum and Immigration Tribunal and for advocacy by organizations such as Amnesty International and Defense for Children International. The artist is affiliated with the Forensic Architecture Department at Goldsmiths College London, where he received a Ph.D. in 2017. Abu Hamdan is the author of “[inaudible]: A Politics of Listening in 4 Acts.” Recent solo exhibitions include Eindhoven (2014), the Hammer Museum in Los Angeles (2018), Portikus in Frankfurt (2016), the Tate Modern in London (2018), The Showroom in London (2012), and Van Abbemuseum.

In 2019, Abu Hamdan was among three finalist nominees for Britain’s most prestigious award in the visual arts, the Turner Prize. The three finalists mutually assessed one another’s work as very different but equally important politically, and together they petitioned the award committee, in the name of “commonality, multiplicity and solidarity,” not to select a single winner. The committee accepted this request awarded the 2019 Turner Prize jointly to all three finalists for the first time ever.

This exhibition and event continue UVP’s 2019-20 programming year, “Wayward Bodies,” featuring artists who explore the entanglement of the body, space, and power.

This event is co-presented with the Syracuse University School of Architecture; College of Visual and Performing Arts Department of Transmedia;  S.I. Newhouse School of Public Communications and the Television, Radio and Film department in Newhouse; Dan Pacheco, the Peter A. Horvitz Endowed Chair in Journalism Innovation at Newhouse; and The Canary Lab at Syracuse University.

It was made possible through the support of the Syracuse University Humanities Center as part of the official program for Syracuse Symposium 2019-20: Silence.