Speaking Up About Stuttering 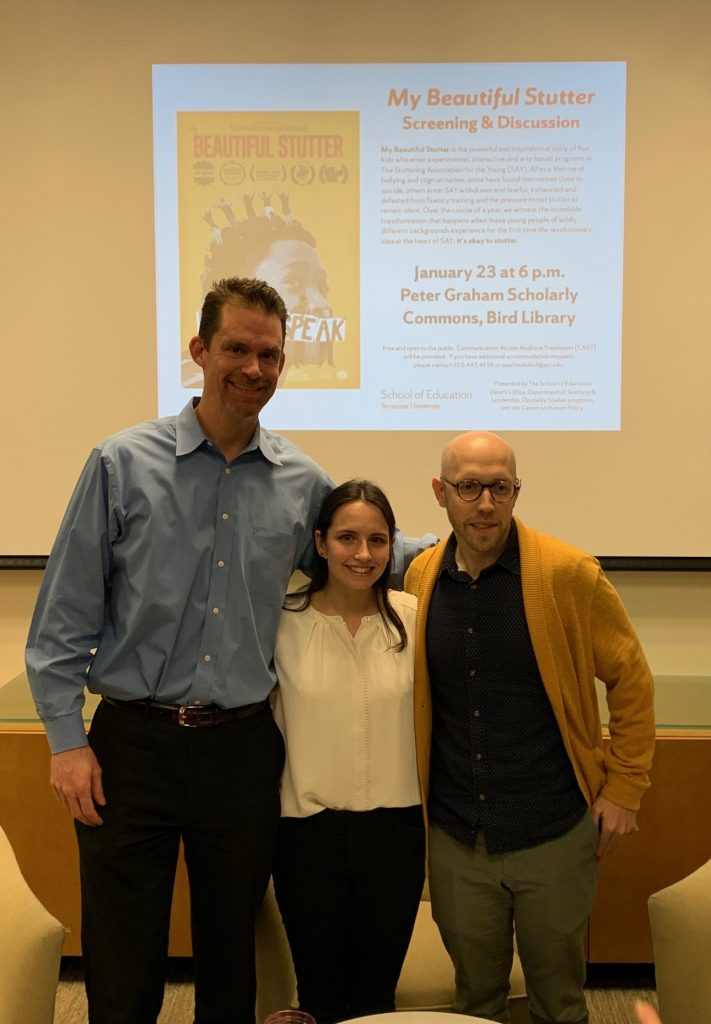 Michael Wilson, Haley Evans and David Haas after the MBS screening in January

It was standing room only in the Peter Graham Scholarly Commons on the night of Jan. 23. Over 100 people, including Syracuse University students, families and medical professionals, were there to see the screening of a new documentary film about a common but often misunderstood speech disorder: stuttering. According to the National Stuttering Association, about five percent of children will stutter, and one percent of the general population will continue to stutter throughout their lives. Though the severity varies widely, it’s estimated that there are over three million stutterers in the United States alone.

Haley Evans, a graduate student in the inclusive education (grades 1-6) master’s program in the School of Education, is one of them. Haley’s advocacy and connections were the catalyst for the successful campus screening event of “My Beautiful Stutter,” and opened the door for others to share their experiences with stuttering without fear of stigma. The documentary follows five kids who stutter, and after having suffered bullying and stigmatization, find friendship and solace in an arts program. The Jan. 23 event screened the emotional film and followed it with a discussion panel featuring Haley and members of the community who stutter.

Growing up in Cazenovia, New York, Haley did not know anybody else who stuttered. As supportive as her family and friends were, she says that they could not truly understand what it means to live with the stress of having a stutter.

“Fighting stuttering can be very lonely,” she says, “especially when you are trying to hide it so you don’t get judged.”

For Haley, connecting her communities at home and at Syracuse University with the support she receives from the local chapter of the National Stuttering Association has been a fulfilling part of bringing the film to campus.

“Last summer I was scrolling through Instagram, and there was an ad for a documentary on stuttering. They were looking for people’s experiences,” Haley recalls. “I sent back a blurb of and let them know that I would love to help with anything they need.”

Haley continued to follow the social media account for the documentary through its development, and in the fall the film crew reached out to see if she would facilitate a screening in Syracuse.

“I thought only close friends and family would come,” she says. But Haley cast a wide net and drew the support of professors Beth Ferri and Christy Ashby in the School of Education. She also assembled a discussion panel, including David Haas, co-leader of the Syracuse chapter of the National Stuttering Association, who is a local writer, historian and blogger, and Michael Wilson, D.D.S., owner of a multi-location dental practice.

“The amount of support from the school, and Professor Ferri especially, was overwhelming. I am very proud to be a part of a school that wanted to showcase this film as much as I did,” Haley says. “The faculty and staff were very helpful with showing me the steps to bring a film like this on campus.”

Haley says that all of her experiences at Syracuse have been positive, and taking on a large event like this was no exception. “My first meeting at Syracuse University was with Christy Ashby. She was so patient and understanding of my stutter, which was a wonderful introduction to the campus community,” she recalls. “That impression has stayed with me. My peers and other professors have showed me their compassion and understanding. I’ve felt supported every step of the way through my journey here.”

“we are all human beings who want to be heard, and that means letting everyone have as much time as they need to speak…”