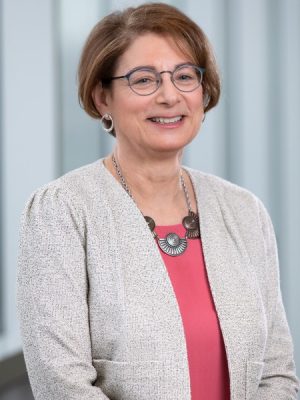 Laura J. Steinberg, who has served in multiple leadership roles driving innovation and entrepreneurship at Syracuse University, has accepted a position at Boston College as the inaugural Seidner Executive Director of the Schiller Institute for Integrated Science and Society. Steinberg currently serves as special assistant to the vice chancellor for strategic initiatives and innovation, interim executive director for Syracuse Center of Excellence and executive director of the Syracuse University Infrastructure Institute (SUII). Steinberg remains on campus until the end of the semester.

“Professor Steinberg has a track record of leading teams to imagine the possibilities that university research holds for society and achieve the promise of innovation for students, faculty and other stakeholders,” says Chancellor Kent Syverud. “In her leadership roles at Syracuse University, she has encouraged creativity within the engineering curriculum and helped build an entrepreneurship ecosystem that provides opportunities for student inventors to take impactful ideas and inventions to the marketplace.”

Steinberg served as dean of the College of Engineering and Computer Science (ECS) from 2008-14, the fourth woman to ever serve as dean of an engineering/computer science school among the Association of American Universities. During her tenure as dean, the college grew by over 500 students, 30 faculty and had a significant increase in women graduates.

“Laura infuses her immense intellectual talent with an unmatched work ethic and applied these traits toward the creation of interdisciplinary research enterprises that benefited multiple programs,” says J. Cole Smith, ECS dean. “We will miss her but are truly excited for the opportunity she will have at Boston College.”

“Boston College is fortunate to be gaining such a tremendous innovator, researcher and strategic thinker,” says Vice Chancellor for Strategic Initiatives and Innovation Mike Haynie. “While I am disappointed to see Laura go, I am thankful for the many ways she has contributed to our university, inside and outside the classroom, in our laboratories, in strategic planning and at the highest levels of innovation. Because of her leadership and vision, students, faculty and community stakeholders have had the opportunity, resources and support to pursue their passions.”

In 2018, Steinberg led the development of the SUII, an interdisciplinary venture that engages all schools and colleges in providing a platform to promote collaborative research and academic programs. The institute focuses on critical topics surrounding infrastructure—highways, bridges, tunnels, utilities and other public facilities, including emerging technologies in “smart cities.” Steinberg took on the role of interim executive director of the Syracuse Center of Excellence in September 2019, where she worked closely with industry and academic partners to help grow the enterprise. A new interim executive director will be appointed soon while a national search takes place.